Tribute To the Dada of Indian Politics 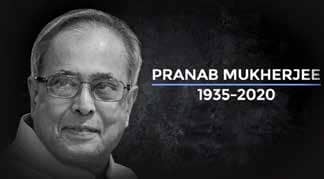 Former President Pranab Mukherjee, aged 84, passed away on 31 August evening after prolonged illness. He was admitted to the Army’s Research and Referral Hospital in Delhi Cantonment on August 10 and was operated the same day for removal of a clot in his brain. He later had gone into septic shock due to his lung infection.

A journalist turned politician, he wore many hats during a career that spanned political generations. Pranab Mukherjee served as the 13th President of India from July 25, 2012 to 25 July 2017. Before becoming the President, Mukherjee served at different times as Defence, Commerce, Foreign, and Finance Minister. He was elected to Rajya Sabha five times and twice to Lok Sabha. In 2019, Pranab Mukherjee was awarded India’s highest civilian honour, the Bharat Ratna.

A man of humble origins, Shri Mukherjee was born in the small village of Mirati in Birbhum District of West Bengal as son of freedom fighters, Shri Kamada Kinkar Mukherjee and Rajlakshmi on December 11, 1935. Shri Mukherjee’s father was a Congress leader who endured great hardship including being sent to jail several times for his role in India’s struggle for independence.

MORE STORIES FROM EASTERN PANORAMAView All