Migrants: The Souls Of India 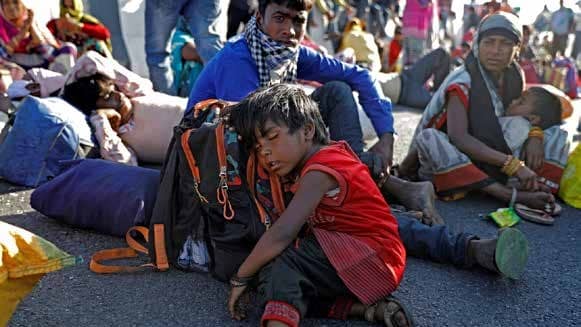 The mists of lockdown wafting all over, Today is fast dissolving into yesterdays And tomorrows are no more the plasma of future, Some shadows surreptitiously Look out through the thick crimson curtains as though exhorting “Awake, arise or be forever fallen”. Destroy the intruder, Burn this invisible Ari. and re-restore the emotional resonances Between man and nature, Induce An invisible catalysis for a silent catharsis of our Mother Earth. Om Shanti, Shanti, Shanti.

There is a loud stillness in the midday air The breeze has run away into the nest of sparrows. High above, the tall robust trees Bellowing painfully at the azure sky, Streaked with crimson patches of clouds.

Seasonal migration for work is a pervasive reality in rural India. An overwhelming 120 million people or more are estimated to migrate from rural areas to urban labour markets, industries and farms. Migration has become essential for people from regions that face frequent shortages of rainfall or suffer floods, or where population densities are high in relation to land. Areas facing unresolved social or political conflicts also become prone to migration. Poverty, lack of local options and the availability of work elsewhere have become the trigger and the pull for rural migration respectively.

Some regions like UP and Bihar have been known for rural migration for decades – however, newer corridors like Odisha, Madhya Pradesh, Rajasthan and recently even North East have become major sending regions of manual labour. Among the biggest employers of migrant workers is the construction sector (40 million), domestic work (20 million), textile (11 million), brick kiln work (10 million), transportation, mines & quarries and agriculture.

Devoid of critical skills, information and bargaining power, migrant workers often get caught in exploitative labour arrangements that forces them to work in lowend, low-value, hazardous work. Lack of identity and legal protection accentuates this problem. The hardships of migrant workers are especially magnified when state boundaries are crossed and the distance between the “source” and “destination” increases. Migrants also become easy victims of identity politics and parochialism. Despite the vast number of migrant workers, the policies of the Indian state have largely failed in providing any form of legal or social protection to this vulnerable group. The urban labour markets treat them with opportunistic indifference extracting hard labour but denying basic entitlements such as decent shelter, fair priced food, subsidized healthcare facilities or training and education. They are also usually out of bounds of government and civil society initiatives, both because of being “invisible” and for their inability to carry entitlements along as they move.

POPULATION OF MIGRANTS IN INDIA

The annual net flows amount to about 1 per cent of the working-age population. As per Census 2011, the size of the workforce was 48.2 crore people. This figure is estimated to have exceeded 50 crore in 2016 — the Economic Survey pegged the size of the migrant workforce at roughly 20 per cent or over 10 crore in 2016. Uttar Pradesh and Bihar are the biggest source states, followed closely by Madhya Pradesh, Punjab, Rajasthan, Uttarakhand, Jammu and Kashmir and West Bengal; the major destination states are Delhi, Maharashtra, Tamil Nadu, Gujarat, Andhra Pradesh and Kerala.

Governments in India clearly have no systematic understanding of their existence and had not anticipated the scale of the migrant exodus. The crisis should spur the government to collect better data and work closely with other stakeholders who have their ear to the ground. A number of empirical studies which indicated that the major sub-sectors using migrant labour are textiles, construction, stone quarries and mines, brickkilns, small-scale industry (diamond cutting, leather accessories, etc.), crop transplanting, sugarcane cutting, rickshaw-pulling, fish and prawn processing, salt panning, domestic work, security services, sex work, small hotels and roadside restaurants/tea shops and street vending. The calculations based on these estimates indicate that the economic contribution of migrants is around 10% of India’s gross domestic product (GDP).

THE LAW OF LABOUR COMMISSION