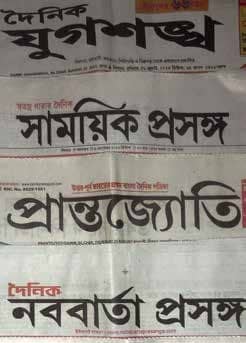 Covid 19 has adversely affected Barak media, print and electronic. A booming industry is faced with unprecedented crisis in its 140 years of history.

According to available records, ever since the publication of the first newspaper of this valley ‘Silchar’ in 1889 edited by Bidhu Bhushan Roy, a school teacher, it has been a well admired and well appreciated human efforts to enlighten and inform the readers of the events happening around. Till Independence of the country, under British Raj, the editors have to be cautious in editing the newspapers as nothing anti-colonial rule finds place on the pages. Still, editors like Bidhu Bhusan Roy dared to criticize and face reprimand and shut down the newspaper.

But this could hardly dent the spirit of those who chose to edit and publish newspapers in the pre-independent era or colonial rule which began in this valley since 1832 and inflamed the passion of freedom lovers without going for direct criticism of the British. And the hoary tradition of journalism was glorified by the publication of ‘Surma’, ‘Bhavishyat’, ‘Bartaman’, ‘Saptak’ and ‘Prachyavarta,’ all weekly. After the British left, newspapers got the liberty it deserves and also support from the democratic government.

From this valley, newspapers in Bengali, Hindi, English, Manipuri and Bishnupriya Manipuri have been published. Quite significantly, around 200 dailies, weeklies and biweeklies have hit the stands from the three districts of Cachar, Karimganj and Hailakandi till date from the day of ‘Silchar’.