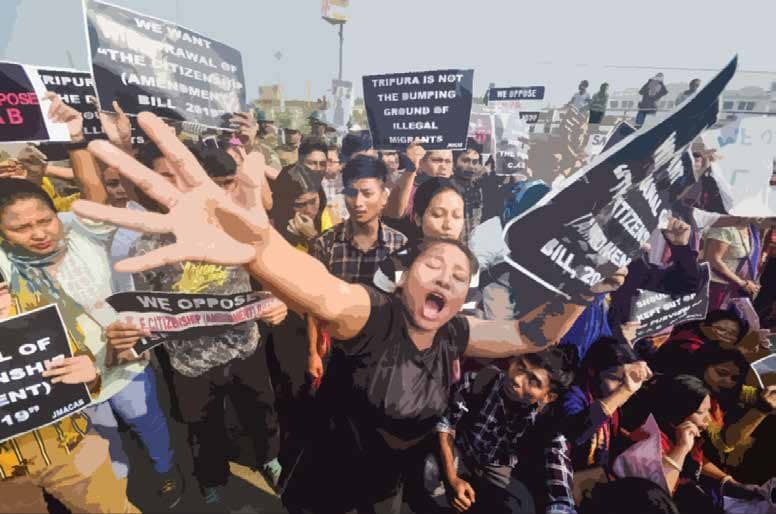 Although visible movement against Citizenship Amendment Act (CAA) has been withdrawn in Tripura and despite strong opposition, all the tribal based political parties and social bodies stepped back from the agitation; decade long amity between tribals and non-tribals is badly affected in the state. While entire country is debating over citizenship of Hindus and Muslims, in Tripura it has become an issue of tribal and Bengalis.

After 17 years bloodshed of tribal insurgency with a dream to make Tripura independent for tribal population, long cherished peace was restored in 2007 in the state. In past 12 years, insurgency has no footprint in commoners’ life here but with the CAA, the old issue of tribal – non tribals gained ground. In 1989, a splinter group of Tripura National Volunteer (TNV) had formed National Liberation Front of Tripura (NLFT) with former vice president of TNV Dhananjoy Reang as Chairman and stated insurgent activities seeking independent Tripura. Subsequently, in 1990, All Tripura Tiger Force (ATTF) was established almost in similar line of NLFT under the leadership of another TNV leader Ranjit Debbarma. Since 1992, insurgency had become a major challenge for the government to continue functioning. In the midst of insurgent activities, in 1993 election, Congress – TUJS government lost and left front government under veteran tribal communist leader Dasharath Debbarma as Chief Minister. The insurgent outfits had called for independent Tripura and eviction of non-tribal settlers who came from East Pakistan during 1971 Liberation War of Bangladesh. Social development works and economic activities of Tripura had come to grind halt till 2007. More than 20,000 people including security forces were killed and a large number of people had been kidnapped for ransom by the armed extremists.