'We weren't waiting to get married' 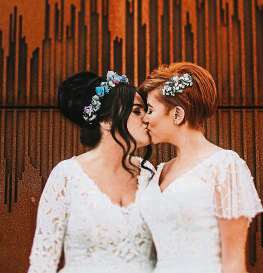 Two young women who married across the border this summer have said that while this week's implementation of same-sex marriage legislation is welcome, they were never going to wait for the law to catch up with them or their plans to wed.

Creggancouple, Danielle Doherty and Emma Bradley, couldn't get married in Derry so made sure their wedding pictures reflected the love of their native city. One of the photos shows them in their wedding dresses at Free Derry Corner – a purposeful move to reflect the battle for civil rights for everyone in society.

Emma said: “We weren't interested if it wasn't a marriage. I thought why should other people be allowed to marry if they are in love?Why are we different?”

Two young Derry women who got married in Donegal this summer have welcomed the implementation of same-sex marriage legislation in Northern Ireland earlier this week but said they were never going to wait until it became legal here before getting married.

Danielle Doherty and Emma Bradley received heartfelt congratulations from across the city when photos of them at various city-centre landmarks appeared on social media on the day of their wedding.

The couple also revealed that a photo of them taken at Free Derry Corner was their way of acknowledging the battle for civil rights for all at the iconic monument.

At midnight on Monday, same-sex marriage legislation in Northern Ireland fell into line with England, Scotland andWales after Westminster enacted the laws in the continuing absence of Stormont.

Same-sex marriage was recognized in the Republic of Ireland in May 2015 after a referendum decreed a change in the constitution that marriage was legal irrespective of the gender of the partners.

Danielle told the Derry News: “Having a wedding in the north wasn't an option. It wasn't anything I wanted to do, because I didn't want a civil partnership, I wanted a marriage. I'm Irish, I live in Ireland and so I wanted to get married here, and it was legal here, so we went to Donegal.

“I think a civil partnership made it seem that what we had was less important – it undermined the whole relationship.

Emma said: “We didn't even consider looking at venues in the North, we weren't interested if it wasn't a marriage. I thought why should other people be allowed to marry if they are in love? Why are we any different? We had to border hop to be treated the same.