A Light In The Lives Of All Who Knew Her 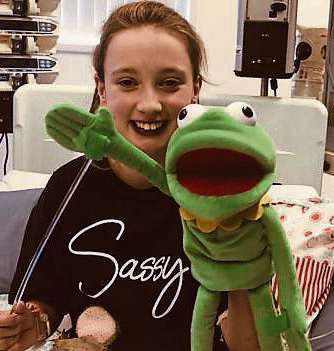 MOURNERS at the funeral of 11 year-old heart patient Aimee Brady were told how more organ donors would be 'a fitting legacy' to the brave schoolgirl.

Archdeacon of Armagh Rev Canon Terry Scott urged those who had gathered at St Swithin's Parish Church in Magherafelt to sign up, so that no other family had to endure the heartbreak the Brady's now faced .

Aimee, a pupil at Spires Integrated Primary School, died in hospital last Wednesday after a nine-month wait for a heart transplant.

She was being monitored round the clock at the Clark Clinic in the Royal Belfast Hospital for Sick Children with her parents Valerie and Stephen, and 14 year-old brother Taylor by her side,

At her funeral service on Sunday afternoon, Rev Scott told mourners: "Aimee was just 11 years old. Yet in her short life, despite all its challenges and difficulties, she touched and made a difference to the lives of so many others.

"She was a strong, brave and funny girl, full of life and spirit.

"She had open heart surgery three times by the age of six - displaying a courage that was an example to us all.

"Though her illness made her weak, she, like every other little girl, just wanted to be outside playing with her friends and having fun. Even when she was having a bad day she would put others first."

“She was a strong, brave and funny girl, full of life and spirit. She had open heart surgery three times by the age of six, displaying a courage that was an example to us all.

“She enjoyed playing for hours on end with her dolls and being in the middle of anything that was messy – like baking buns and cakes, making pizzas and playing with slime. She loved football and Formula 1 — an avid Cliftonville supporter she so looked forward to getting to their match each weekend.”