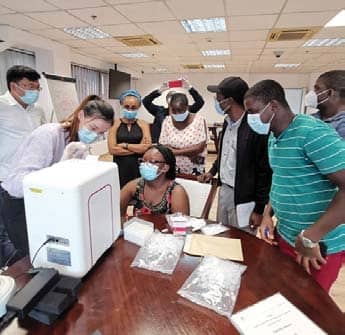 For some time now, Gregory Rockson, co-founder and CEO of mPharma, a Ghanaian healthcare startup, has had only one idea in mind: finding ways to make more COVID-19 tests for his country.

His company is the largest supplier of medicines in Ghana and operates a network of branches across the country and abroad, including in Nigeria, Zambia and Zimbabwe. Following the recommendation of one of his investors, Breyer Capital, Rockson became interested in the range of products offered by Chinese firm Sansure Biotech. Since the onset of the epidemic, Sansure Biotech has rapidly developed a whole range of virus detection reagents, equipment and POCT devices, which have been exported to more than 110 countries and regions as part of China’s anti-pandemic assistance.

As such, cooperation between Sansure Biotech and mPharma is a good example of the broader collaboration taking place between China and Africa in the face of the pandemic. In addition to Sansure Biotech, many other Chinese companies have been engaged in science and technology cooperation with African countries to jointly address the challenges of the ongoing health crisis.

When it became clear that the COVID-19 pandemic was going to have a major impact on the continent, mPharma immediately identified one of the problems that would hinder an effective response on a larger scale in Africa: the lack of screening equipment and detection reagents.

According to CDC Group, a British finance and development institution that funds mPharma, at that time Ghana had only two laboratories able to perform screening tests, Nigeria had six, and Zambia had only one. However, Rockson knew that there were dozens of private medical labs in these countries that could perform tests if they had the necessary equipment and components.