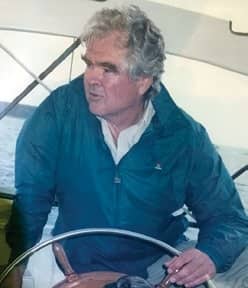 BROOKLIN—Peter Albert Sturtevant died at his summer home on October 9, 2019, in Brooklin, Maine.

A resident of Sanibel, Fla., he was born on September 5, 1930, in Washington, D.C., to William North Sturtevant and Elizabeth Wheeler Sturtevant Dunn. He lost his older brother, North, a Yale graduate and Navy flier, in 1944. He attended St. Albans School in Washington and graduated from Choate. He later attended Harvard and Rollins Colleges (BA), George Washington Law School (JD) and the University of Vermont (MA).

Peter was an avid fly fisherman, bird hunter and sailor. A superb athlete, he pitched in the NCAA tournament for Rollins College and for the Single-A Cody Red Sox in Wyoming. He was a former Commodore of Center Harbor Yacht Club in Brooklin, Maine, where he sailed his sloop, Cachalot, and a member of Chevy Chase Club in Maryland.