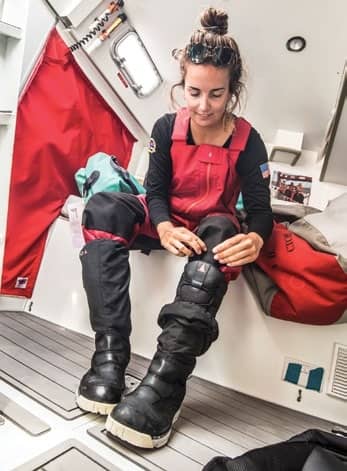 BLUE HILL—“I always found school and sailing to be incredibly empowering,” said Courtney Koos, who was educated at George Stevens Academy and Bowdoin College and sailed for both schools, in an email.

It’s no surprise then that Koos, a member of the GSA Class of 2012, has chosen to help promote access to education for girls as the engineering crew member aboard the historic yacht Maiden on its 30-month voyage around the world.

This is not Maiden’s first trip around the world. In 1989-90, Captain Tracy Edwards and crew competed in the Whitbread Round The World Challenge, the first circumnavigation of the globe by women at a time when so many said it couldn’t be done and some were openly derisive of the attempt.

That journey and that “legendary vessel,” Koos said, inspired her as she grew up on the water in Castine, sailing with her family and at local yacht clubs many summers. Even so, “it was a bit daunting,” she said, to join the GSA sailing team in the spring of her freshman year. “I knew there was a lot to learn from the upperclassmen.”

And so she did learn a lot, sail a lot, and win a lot of races. Koos credits much of this success to the support she received at GSA and in the community, whether from her teammates or the “fantastic coaching” she received from team Tom Gutow, Dee Powell and Patrick Haugen, “who spent hours freezing in tenders chasing us around the bay” or driving to regattas in Southern Maine and other New England states. Tom Brown and Caroline McNally spent countless hours with the team at practices, the sailor said, doing “chalk talks” in their offices at Maine Maritime Academy.