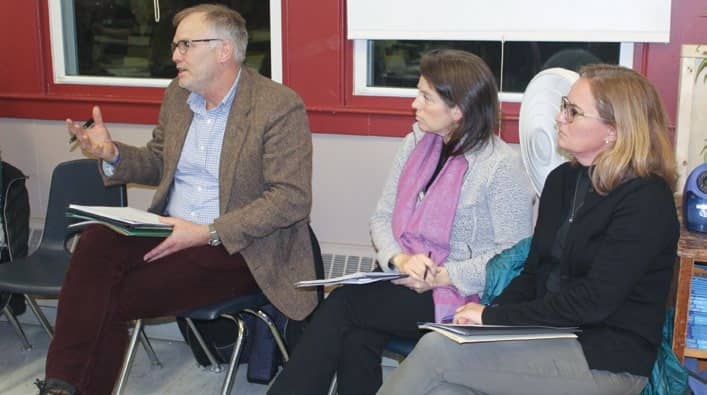 BLUE HILL—An announcement sent to parents of George Stevens Academy students November 21 alerted them to what amounts to a financial crisis for the independent high school, which is requesting a tuition hike to $14,200 per student.

This year, the seven sending towns—Blue Hill, Brooklin, Brooksville, Castine, Penobscot, Sedgwick and Surry—paid the state-set tuition rate of $11,759 per student, while the actual cost per student is $14,646, according to figures presented by Head of School Tim Seeley, Board of Trustees Chairman Samantha Politte and trustee Zoe Tenney. Previously, that gap was primarily subsidized through tuition paid by international students enrolled in the boarding program.

“The international program is no longer generating as much revenue,” Seeley said. “And the bottom line is that we cannot cover the gap by ourselves.” In the past three years, Seeley said, the program has added $2 million to the school’s operating budget. The school was not able to fulfill a request for documents confirming this amount by an early Thanksgiving press deadline.

Seeley, Politte and Tenney presented their tuition request, accompanied by financial information, to the Sedgwick school board and members of the Brooklin school board November 19 and the Union 93 school board the next day.

While fundraising, and income from a $6.5 million endowment, generates close to $400,000 in revenue, it can’t make up the shortfall of $1 million less coming in from the boarding program, which grew several years ago but fell from 49 students in 2017 to 31 students this year.