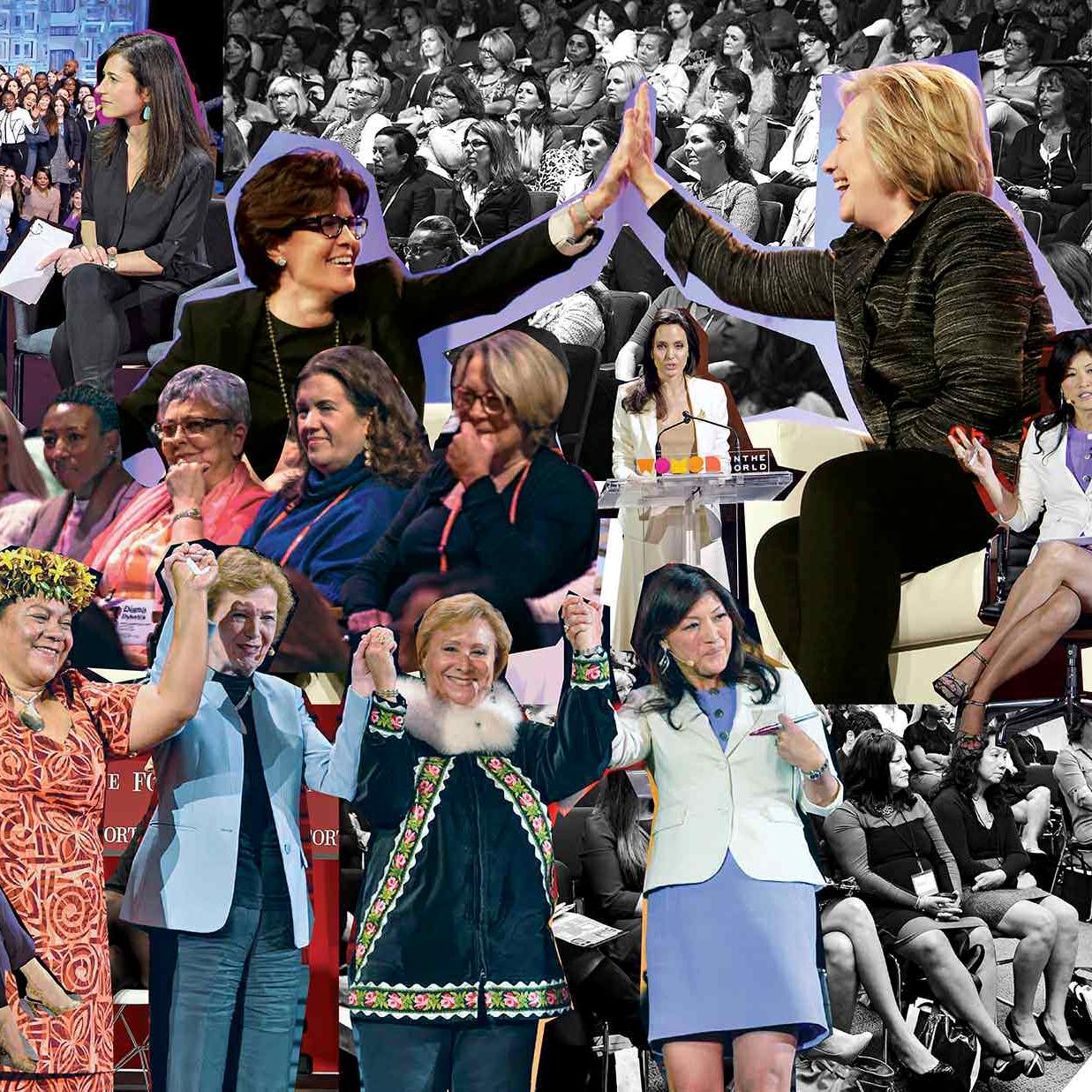 Feminism is being branded and sold like never before. Who is it really helping?

The first sign that one is a a women’s empowerment conference is that there are women on the stage at all—the all-male panel discussion remains an inescapable part of modern life. The second sign is the footwear. Picture a horizontal line of 4-inch stilettos, dangling at the eye level of the audience, as the women wearing them sit perched on stools. It appears that the first thing a successful, liberated woman does is slide her feet into the most gait-inhibiting shoes available, ideally in snakeskin.

Is Tory Burch on the dais, outfitted in her own designs, talking about how women need to believe in themselves more? How about Diane von Furstenberg, saying, “I have never met a woman who is not strong”? Perhaps Jessica Alba, the actress and co-founder of the Honest Company, which markets nontoxic household products, is in a white armchair, asking Gloria Steinem for “tips for how women can excel in the workplace.” Talk of “finding your power,” followed by a discussion on the glass ceiling (or some approximation), “balance” (as if it existed), and securing a mentor (famously easier for men)— these are all indicators, too.

If Tina Brown, the celebrated former editor of Vanity Fair and the New Yorker, is there, you know you’ve reached the summit, literally. Her annual Women in the World Summit, a venture she launched in 2010, has done so well that it sold out 2,500-seat venues four years running and expanded overseas, showing that it was possible to monetize female rage. People pay up to $300 per day to attend, and the summit was profitable from its very first year, thanks to sponsorships by such blue chip backers as Toyota Motor, Dove, Google, and MasterCard. October’s inaugural Women in the World London was packed morning to night with activists from around the world reliving their struggles, movie stars sharing life secrets, politicians, and royalty. During breaks, women milled around a crowded lounge, nibbling on popcorn and tweeting. Adding to the Burning-Man-for-feminists vibe, a gal in a camel’s hair coat passed out postcards soliciting donations for a Mary Wollstonecraft memorial (“from well before the Suffragettes!”). When asked why she was there, Eddie Harrop, a young handbag designer with a cascade of blond hair, said, “I want to be inspired.” Haseena Latheef, the founder of an ethical online fashion retailer, chimed in that she was also seeking motivation. “You think you’ve got issues in life,” she said, “and then you hear what these women are up against.”

Stefanie Ascherl, an entrepreneur in her early 30s and a women’s conference regular, said these events restore hope. “I think a lot of times, being a woman, we’re expected to do everything—have a family, be productive in business. It’s overwhelming,” Ascherl said, fresh from the Pennsylvania Conference for Women, which attracted 8,000 women to hear Alba, Steinem, and Rachael Ray, among others.

She added that expectations of being thin and perfect-looking only add to the stress. “When I come to these events and see all of these women doing all these amazing things—it’s pushing me and motivating me to go forward,” she said. “I wonder— if men just sat down and let women do things, maybe some amazing things would happen.”

There wasn’t much time to contemplate the question, because as soon as Women in the World wound down, more summits were about to begin. In fact, it was possible to spend almost every single day last fall at a women’s empowerment or networking event of some kind. The Monday following Brown’s event saw the opening evening of Fortune’s Most Powerful Women Summit, geared toward high-level women in the corporate world. Before that lavish three-day extravaganza closed, two more competing women’s conferences were vying for social media attention: the Women’s Forum Global Meeting, in Deauville, France (“to strengthen the influence of women throughout the world”), and the Grace Hopper Celebration of Women in Computing, in Houston (hashtag #OurTimeToLead).

On Oct. 23, MSNBC host Mika Brzezinski launched her Know Your Value conference in Boston, which was to be the first in a nationwide series. The Women in Policing Conference (“Hear Them Roar!”) was sandwiched in there. Earlier in the month, there was the Inc. Women’s Summit (“Be Inspired, Be Empowered, Get Equipped”), followed by the S.H.E. Summit (“the world’s most accessible women’s empowerment conference”). And that was just October. There’s also TEDWomen, Jump Forum, Leap Conference, BlogHer, Watermark, Women Rule Summit, the 3% Conference for women in advertising, Women’s Entrepreneurship Day, a woman’s conference sponsored by nearly every state and industry, including by several investment banks, plus dozens of one-off panels all year long. In what may be a sign that the branding of women’s issues is immune to irony, the National Football League hosts its first-ever Women’s Summit during Super Bowl week on Feb. 4. Coming off a string of player domestic abuse scandals and cheerleader lawsuits over fair pay, it’s called In the Huddle to Advance Women in Sport, and it features Serena Williams and Condoleezza Rice.

Having been to many of these events, and having eagerly participated in a few, I can attest that they’re often stirring and, yes, inspirational. It can be galvanizing to be around so many females with superhuman résumés, to hear their tales of surviving corporate battles or even actual wars. You often leave with a rosy glow, a sense of resolve, and a commitment to do more, for other women and for yourself. But then you return to your desk, probably next to a higher-paid male co-worker, and the old, familiar malaise sets in. There was no discussion of changing policies or lobbying members of Congress. No e-mail list to stay in touch and organize. In the end, one wonders if the explosion of these events is a reflection of how far women have come or proof that they haven’t made much progress at all. Why, in spite of all the energy these conferences generate, are women still just … talking?

“Women are constantly being exhorted to lean in, to push the corporate envelope, to push their careers higher. And they want to. So the good news is they’re taking it on themselves to organize these sorts of events,” says Michael Kimmel, the author of Angry White Men and a rare male speaker at such events. “But the bad news is, they have to go outside of their companies to get it. Why? Because they can’t get the real support and understanding they need in such consistently male-dominated companies.”