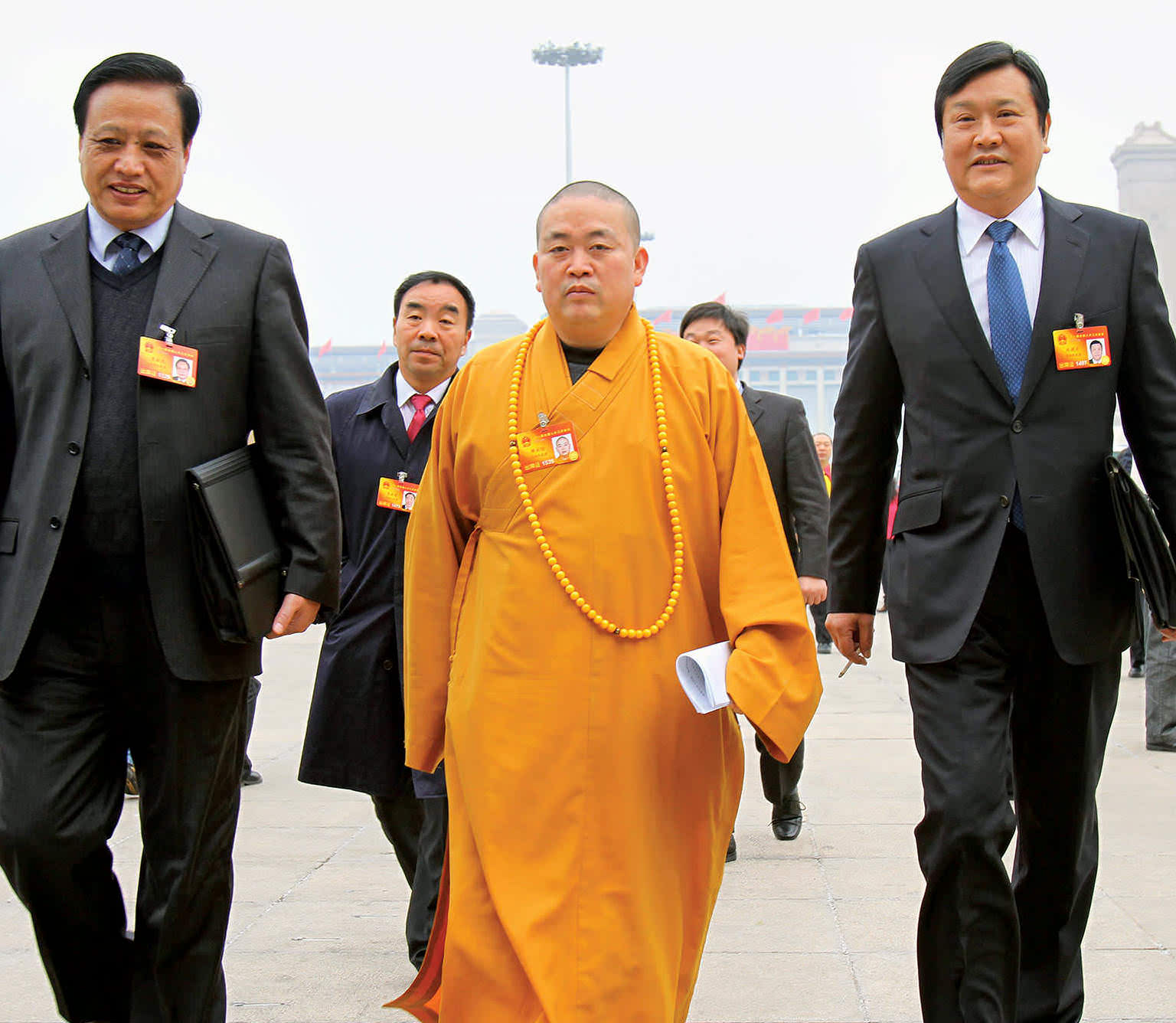 Shi Yongxin built a tiny monastery into a global brand. Then karma caught up to him.

His Holiness the Venerable Abbot Shi Yongxin would deliver the money himself. Five thousand miles from the Shaolin Temple, the ancient Buddhist monastery and wellspring of kung fu that he oversees in the mountains of central China, a city council in Australia had approved his purchase of some land. Attuned to the power of symbolic gestures, Yongxin wanted to seal the deal in person, so in February the cherubic, saffron- robed abbot journeyed from Henan province to Shoalhaven, New South Wales, and handed the mayor a check for $3 million. Yongxin smiled and pressed his hands together, as if in prayer. “It is destiny,” he said.

Yongxin had negotiated for the property for nearly a decade. He wanted to build a complex there called Shaolin Village, where Australians and international tourists could learn about Chan Buddhism and the temple’s famed warrior monks. But to think of Shaolin Village as a temple would be like calling Versailles a house. In addition to a monastery and kung fu academy, the development Yongxin envisioned included a four-star hotel with 500 beds, residential villas, and a 27-hole golf course, at a cost of more than $270 million.

Yongxin, in his 16 years as head of the Shaolin Temple, had presided over many business ventures and was known across China and the world as the “CEO monk.” Since taking his vows of piety in the early 1980s, he had transformed the Shaolin Temple—a picturesque compound of prayer halls, tree-dabbled courtyards, and Buddhist shrines set against a lush mountainside—from a poor and relatively unknown outpost into a global brand. He became a symbol of the successful intersection of church, state, and commerce in China, a kind of anti-Dalai Lama who enjoys political favor as well as spiritual status.

Yongxin first drew national attention in China in the mid-1990s, when he filed a lawsuit against a company that produced Shaolin brand sausages a product that was not only unauthorized but also, given the Buddhist monks’ vegetarianism, particularly off-message. To prevent further brand dilution, he created the Henan Shaolin Temple Industrial Development Co. and registered the name Shaolin as a trademark. While abbots had traditionally overseen only the temple grounds, Yongxin got the shabby warren of shops and martial arts schools outside the complex demolished, in the name of preserving its character, and he clashed with the local government over ticket sales to the region. He also created the Shaolin Kungfu Monk Corps, a touring troupe that performs for paying audiences from Thailand to Canada.

For centuries, the monks of the Shaolin Temple mostly prayed and practiced martial arts, while living off the land and the donations of worshippers. Under Yongxin, their activities expanded to include food and medicine sales, construction, entertainment, and consulting. In 2006 the temple teamed with a Shenzhen media company to produce Kungfu Star, an American Idol-style TV competition. Shaolin announced last year that it would begin developing mobile apps, including instructional kung fu software. The Shaolin Village project in Australia was only the next logical step in the abbot’s expansionist theo-corporate empire. “If China can import Disney resorts,” he said in March, “why can’t other countries import the Shaolin Monastery?”

Yongxin had a knack for politics as well as business. He was both vice chairman of the Buddhist Association of China and a member of the National People’s Congress, the country’s legislature. He met with luminaries, including Nelson Mandela, the queen of England, and Tim Cook, the head of Apple. Within the temple, he commanded a loyal following among its 400 or so monks. “He’s the person I respect the most,” said Shi Yanlu, one of Yongxin’s most trusted disciples, at one point. “He really dares to dream.”

Then, on July 25, a message about Yongxin appeared on a Chinese Internet forum. Its authors claimed to be Shaolin disciples and used the pseudonym Shi Zhengyi. Shi is a title taken by all Shaolin monks, and zhengyi means “justice” in Mandarin. Borrowing the language of President Xi Jinping’s ongoing anticorruption campaign, which promises to target both “tigers” (high-level officials) and “flies” (low-level ones), the post asked, “Who will supervise the big tiger Shi Yongxin?” To “protect the hall of our ancestors” and “revitalize Shaolin,” the self-proclaimed whistle -blowers were “bravely stepping forward to reveal the rule-breaking and lawbreaking of Shaolin Temple Abbot Shi Yongxin.” His misdeeds, they charged, included raping a nun, fathering two children, embezzling funds, and generally “staining the reputation of the Shaolin Temple.” The accusers posted photos of a nun and a small child who were supposedly Yongxin’s mistress and daughter.

Over the next few days, Zhengyi released new material. Side-by-side photos seemed to show that Yongxin had not one but two housing registrations, which is illegal in China. A police report included handwritten notes from the interrogation of a Shenzhen businesswoman who claimed she’d slept with Yongxin and had been threatened by his disciples; one of them “told me he’d let me have a comfortable death,” she told the police. A social media user, posting under the same woman’s name, uploaded a photo of dirty underwear supposedly worn during a sexual encounter with Yongxin and claimed to have saved a condom used by the abbot. Letters bearing the official stamps of former Shaolin abbots said that Yongxin h a d b e e n expelled from the temple— twice. The documents’ authenticity wasn’t confirmed, but those inclined to believe the charges saw in Yongxin a classic portrait: the outwardly pious religious leader exposed as a hypocrite, abusing his authority to commit sins of the flesh and the purse. 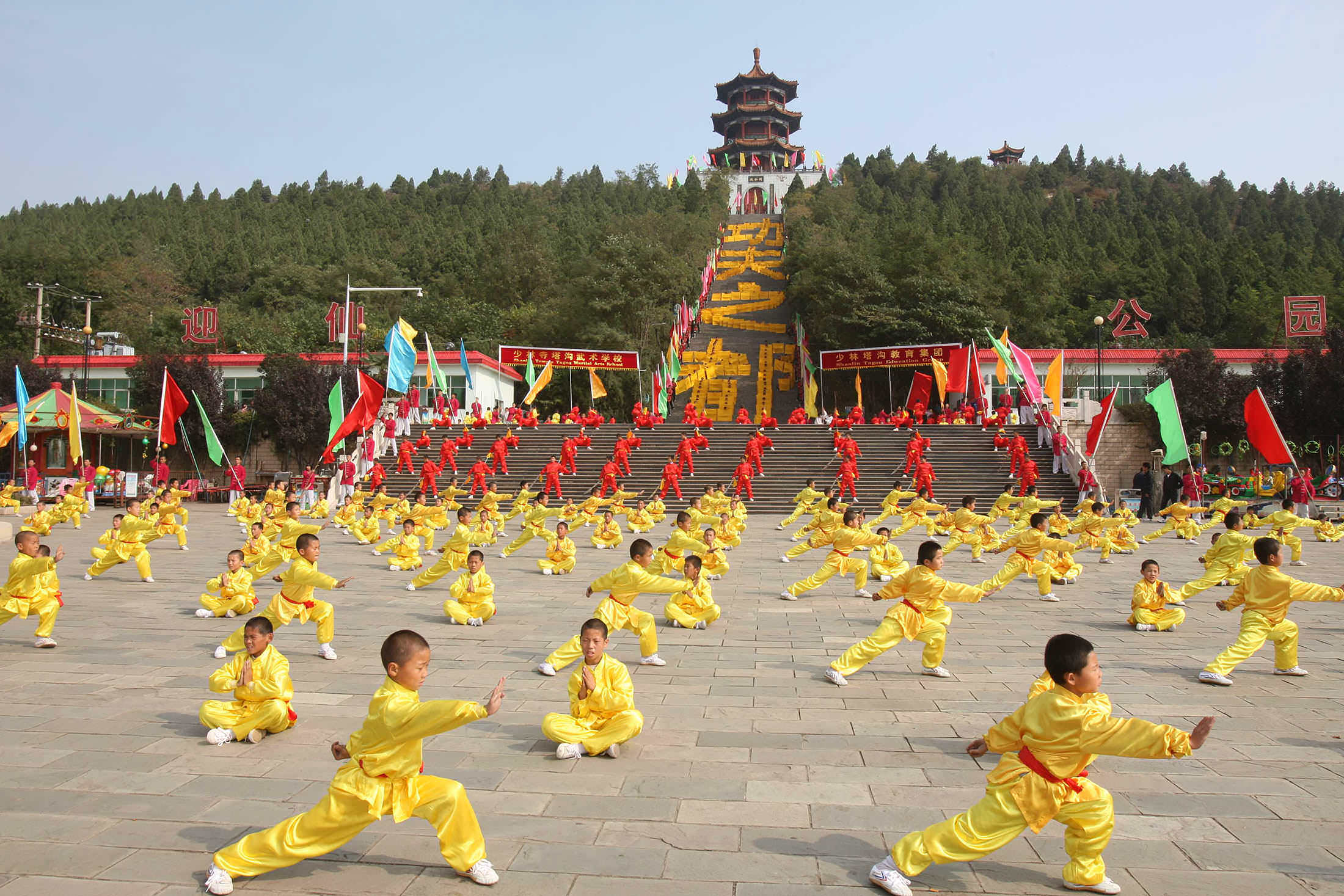 Yongxin made a show of proceeding with business as usual. On its website, the temple dismissed the charges as “vicious slander” and called for the government to investigate and prosecute the accusers. Yongxin taunted them in an interview with Global Times, a Chinese newspaper, published on Aug. 3. “If I really had a problem, you wouldn’t have to post accusations about me on the Internet,” he said. “You could go directly to the relevant departments.”

He might have regretted the challenge. That week, six Shaolin disciples traveled north to Beijing and, on Aug. 8, walked into the Supreme People’s Procuratorate, the central government agency that handles investigations. The group included a former head of the Monk Corps, several other senior monks, and, leading them, Yongxin’s trusted disciple, Shi Yanlu. Within a week, government investigators were visiting the Shaolin Temple and scrutinizing the Yongxin empire.

The Shaolin Temple was founded in 495 A.D. by the monk Buddhabhadra, who had traveled from India to China. It’s considered the birthplace of Chan Buddhism, a precursor of Zen Buddhism. At the foot of Mt. Song, the temple became known for its warrior monks—a contradiction, given their commitment to nonviolence, but an advantage during wartime—when, in the year 621, a group of Shaolin monks came to the aid of the Tang emperor in battle. The temple thrived during the Ming dynasty, as government officials recruited its monks for 16th century military campaigns, including several battles against Japanese pirates. One account describes a group of 120 monks killing more than 100 “dwarf pirates,” while suffering only four casualties.

The Shaolin fared worse under the Qing (1644-1911), as the new rulers, questioning the monks’ loyalty, tried to curb their military activity. In 1928 the temple was torched by a Nationalist general. The rise of Mao Zedong and the Communist Party caused damage first spiritual—monks were forbidden to wear robes or practice Buddhist rituals—and then physical, when the Red Guards destroyed many of the temple’s relics during the Cultural Revolution.