The Brioso uses a Scan-Speak Revelator midwoofer and a Transducer Labs Alumina ceramic dome tweeter in a floor-standing, mass-loaded transmission-line (ML-TL) enclosure. Paul won first place for this design in the over-$200 category in the 2017 Midwest Audiofest (MWAF) event held by Parts Express.

My goal with the Brioso (Italian for lively) was to create a speaker with really high definition by using well-regarded, quality drivers with a transmissionline (TL) design for a bass response in the low30s. I’m fortunate that cost was not particularly a limitation for me, but to minimize the complexity and keep costs from getting completely out of hand, I chose a two-way design (see Photo 1).

For the midwoofer, I originally planned to use a 4-â„¦, 7” Scan-Speak Illuminator and a Transducer Labs Beryllium tweeter. After getting opinions/ recommendations relative to cost/performance considerations from several fellow DIYers, especially Dan Neubecker, I decided to use the Scan-Speak Revelator 18W/8531G00 along with the Transducer Labs Alumina ceramic tweeter, N26CR2-A. What was “lost” with these choices was about 3 dB in sensitivity, but what was gained was a very amplifier-friendly impedance and a pretty simple crossover, plus a reduction in driver costs of approximately $200 per cabinet, which ultimately paid for all of the crossover components. 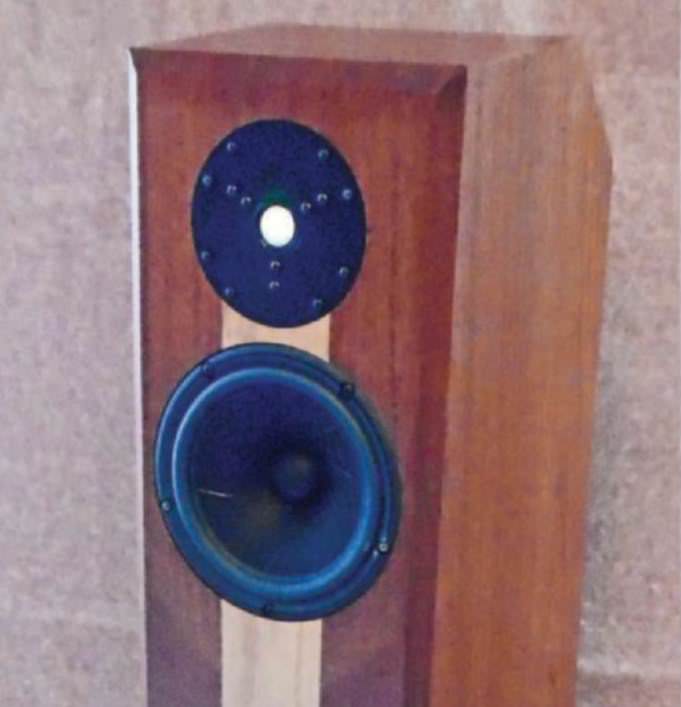 The 18W/8531G00 is mounted in a single-fold, mass-loaded transmission line (ML-TL) containing about 1.75 ft3 of volume with a physical line length of 6’. The effective length of the line, however, is almost 6.5’ due to the first half of the line having a mild negative taper (decreasing cross-sectional area), a result of the baffle being tilted back at 5°. The quarter-wavelength resonance of the line’s effective length tunes the enclosure to approximately 44 Hz. That is not low enough to tune the system to 28 Hz, as is appropriate for this midwoofer’s fs and Qts, and achieve an essentially flat system bass response. The mass-loading port, mounted on the rear panel, completes the system tuning—resulting in a pretty smooth overall bass response shape with a predicted anechoic f3 of 31 Hz and f10 of 23 Hz (see Figure 1).

The baffle was tilted back as Dan recommended to aid in reducing diffraction anomalies (along with the three edges of the baffle being chamfered). The bottom 2” are separated from the rest of the cabinet by a solid horizontal divider, above which is the TL enclosure, thus creating a pocket at the bottom for the crossover assembly mounted on top of the base assembly (see Photo 2). With the cabinet on its base, the tweeter’s center is located just over 37” above the floor, a good location relative to the typical ear height range of 35” to 38”. I used Martin King’s ML-TL Corner worksheet (Revised 8/14/09) to model the transmission line. 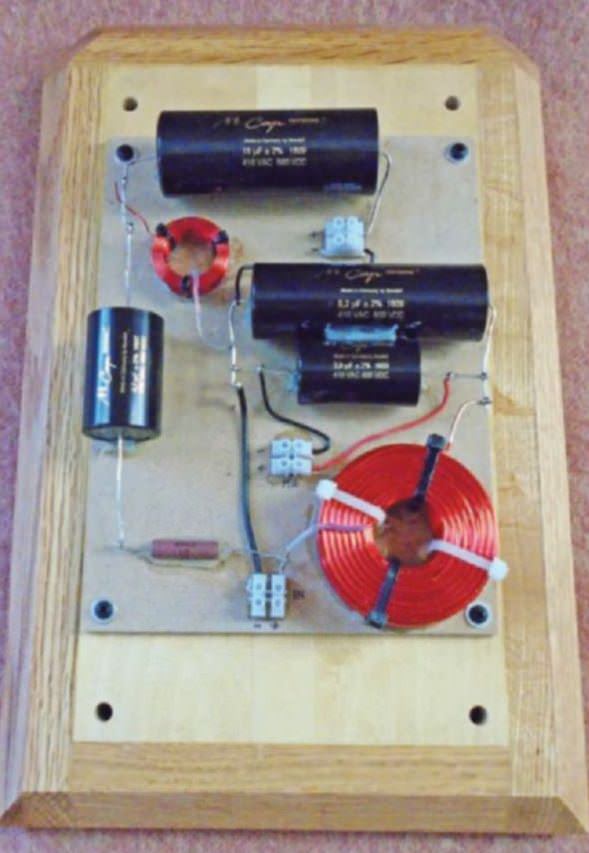