Tinariwen: Even Nomads Get The Blues 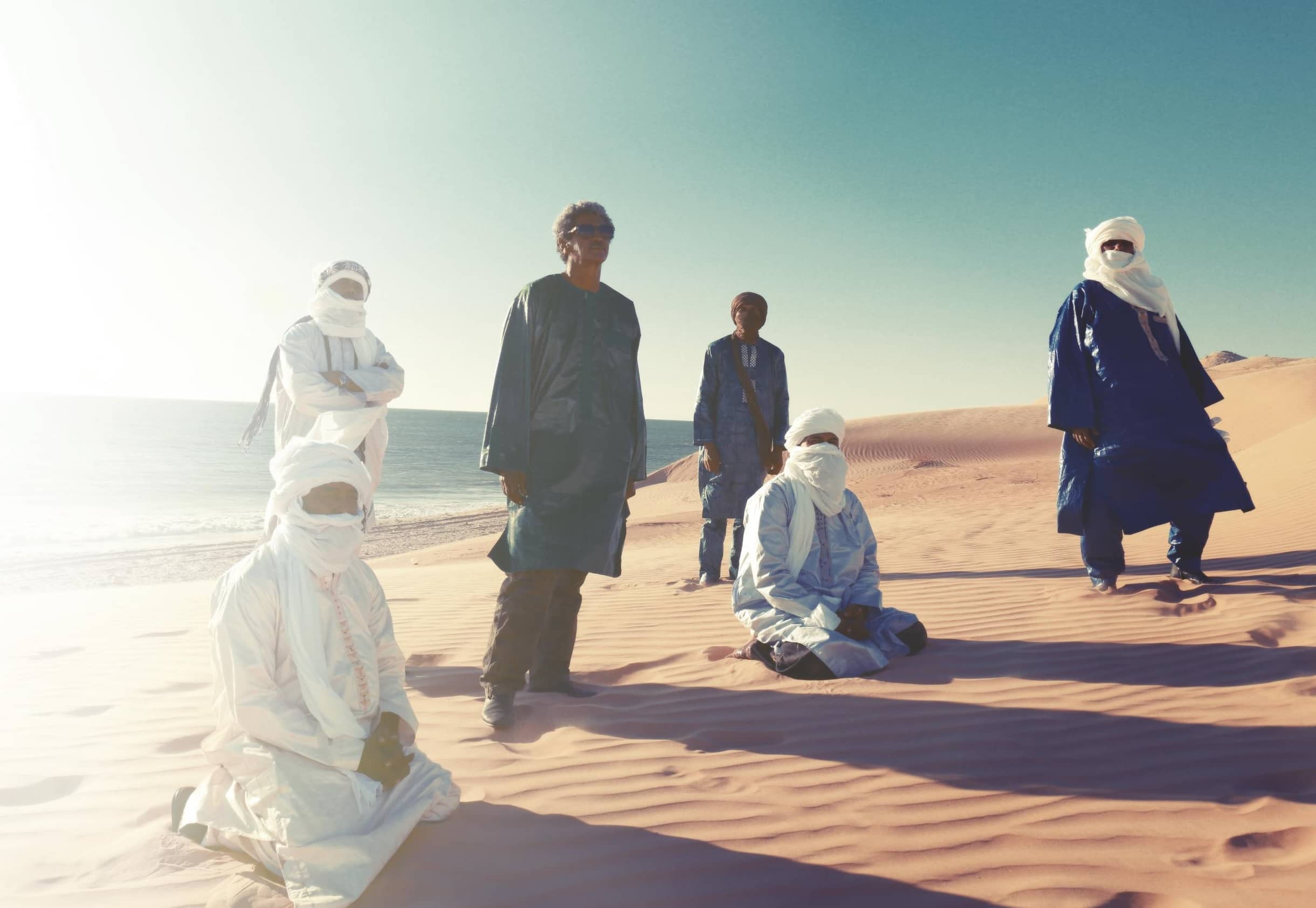 A lot has changed for TINARIWEN since they became superstars of desert rock’n’roll. But their Saharan homeland remains as troubled as ever. We track the band down in Morocco, where Michael Bonner hears tales of exile, insurgency and belonging. “As long as people are oppressed, there will be room for protest music,” they explain

IT is Solstice in Morocco. Down towards the south of the country, the pale sandstone fortifications of Essaouira face out across the Atlantic. Inside the town’s walls, very little has changed architecturally since the 18th century. Pass through the ancient gates and the old medina is a jumble of narrow, bustling streets filled with craft shops, cafés and – presumably in a nod to its colonial past – boutique French restaurants. Orson Welles, Paul Bowles and Hendrix have all been drawn to the mystical stone buildings and windswept headlands – while more recently, HBO came here to film Game Of Thrones. Currently, though, Essaouira is hosting a very different kind of entertainment: the annual Gnaoua festival, a free event that brings 500,000 people from across Africa and Europe. Now in its 22nd year, the festival has come to represent the congruence between the region’s sacred music traditions and contemporary blues, jazz, soul, reggae and tropicália from further afield. There are stalls selling charred corn on the cob, sugarcane juice and barbecued meat; street traders hawk brightly coloured clothes and jewellery alongside football strips and children’s toys. The air is filled with the bitter smell of burning charcoal. June 21, 2019, then, and Tinariwen have drawn a record crowd to Place Mulay Hassan, the town’s main square overlooking the harbour.

The collective’s mesmerising, snaking grooves, their unravelling, exploratory guitar lines and mournful meditations on freedom and exile prove both alluring and immediate. It certainly bewitches the crowd – fashionable twentysomethings down from Casablanca in skinny jeans and high heels, residents from the nearby countryside in traditional dress, the local chapter of the Sons Of The Sahara biker gang, backpackers from across Africa, a smattering of Europeans and a few cleancut Americans down from the embassy at Rabat.

The following day, the group hold court in a riad built into the city’s ramparts. The tour manager and a sound engineer graze on a late breakfast in the rooftop restaurant. Meanwhile, in a partially darkened room on another floor, Eyadou Ag Leche – the band’s bass player and current spokesman – busies himself with an important daily ritual. This involves repeatedly brewing up incredibly strong, sweet mint tea using a portable electric hob and a battered red kettle. Finally, and with much ceremony, he fills two small glasses and passes them round the room. Curled up next to Eyadou is Said, the group’s lanky percussionist, who drinks his tea, rises and pads silently out into the corridor. During the course of the interview, other band members come and go. There is rhythm guitarist Elaga Ag Hamid, dressed in bright-blue Tuareg robes. And then there is guitarist Alhassane Ag Touhami, dubbed “The Great Lion”, who sits affably in the corner, quietly counting a strand of prayer beads.

“The people who know us in North Africa, in Libya, in Morocco, in Nigeria, these are our core audience,” says Eyadou, talking about the show the previous night. “There are so many issues in different territories in Africa, that for us it’s important that we bring young people together to enjoy music. It’s a cause for optimism.”

The Gnaoua festival organisers have tried unsuccessfully for the last 10 years to book Tinariwen; but as Eyadou explains, their busy international touring commitments meant they were never available. This year, they finally made it; and the timing is serendipitous. There is a new album, Amadjar – the band’s ninth – whose songs repeatedly express dismay at a world that’s been thrown off-kilter – where the nomadic traditions of the Tuareg people, so frequently mythologised in Tinariwen’s songs, are increasingly at risk in a historically unstable region. Tinariwen are acutely aware that their country faces a profound existential crisis, the result of decades of oppression, drought and military conflict.

“The problem is not the people, the problem is the politics,” insists Eyadou. “There is corruption everywhere in this administration. There’s dirty money being made from trafficking drugs, weapons and people. It’s a no-man’s land now, there are no rules.”

WHEN Tinariwen set to work on Amadjar, they did so guided by assouf. Not quite bound by one strict definition, assouf evokes a sense of longing, or loss, shared by the nomadic Tuareg people. It encapsulates a nostalgia for their homeland and a past way of life that no longer exists for the Tuaregs – or Kel Tamashek (“those who speak Tamashek”) as they call themselves. The traditional Tuareg territory covers a vast area of the Sahara stretching from southwestern Libya to southern Algeria, Niger, Mali and Burkina Faso. Their struggle to receive recognition from the government of Mali has led to several insurgencies, and the recent introduction of Islamist sects into the region has further complicated the situation; from the ’60s onwards, many Tuaregs have been forced to permanently alter their way of life.

“That word – assouf – is the body and blood of so much Tamashek poetry,” says Andy Morgan, who managed the band during their international rise. “It’s the pain that’s left behind when your loved ones have gone.”

“It’s a feeling we have carried forwards from the old days,” explains Eyadou. “It is a state of mind. We are always looking for assouf for our music. The idea of travelling, camping and so on is to find assouf, to find this feeling.”

One outsider who has a perspective on this elusive quality is Bad Seed Warren Ellis, who plays violin on five of Amadjar’s 13 tracks. “They play incredibly deep and meditative music that comes from beyond,” he says. “They are one of those bands many of us aspire to be, intuitive, unique and soulful. There is a depth to their music that is the hardest part to find. It’s offered to few and few find it. Music from the past and the future.”

Work began on Amadjar in October 2018, just after the band played the Taragalte Festival in M’Hamid El Ghizlane, on the southern tip of Morocco. The band and their crew left M’Hamid in an old SUV and a camper van that had been converted into a makeshift studio and spent the next 12 days driving via the Atlantic coast and Western Sahara to Nouakchott, Mauritania. “We wanted to meet another musical culture from the Sahara,” says Eyadou. “The Saharawi music from Western Sahara and music from Mauritania – the Jaguar music.”