The Strange Birth And Near Death Of Weezer 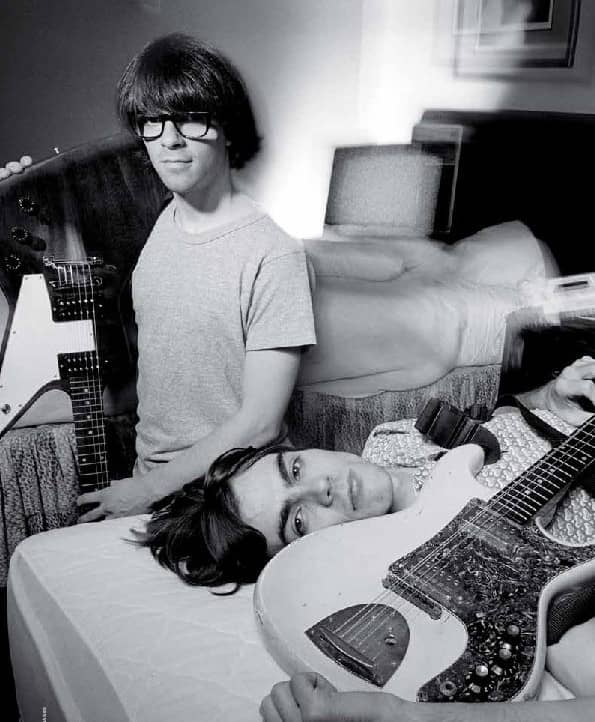 25 years after the Blue Album, Weezer’s past and present members look back at their origin story

In the spring of 1990, Rivers Cuomo was 19 years old, and all of his plans were coming undone. The year before, he and his high school metal band, Avant Garde, moved from suburban Connecticut to L.A., all five members crammed into the same filthy studio apartment, sleeping on the floor. Cuomo was the lead guitarist, with an arsenal of squeal-y virtuoso licks and hair so long and majestically poufed-up that it essentially served as the band’s sixth member. Flamboyance aside, Cuomo left frontman duties to an operatically inclined friend. “I could have seen myself in the NBA as easily as being a lead singer in a metal band,” Cuomo says now. “That’s just, like, unthinkable.”

Avant Garde gave themselves a slightly less embarrassing new name, Zoom, and streamlined their music, though they still sounded like a more proggy, less-fun Dokken. Cuomo tried easing up on the hair spray. None of it helped them find favor in a metal scene so overcrowded with dreamers that Sunset Strip sidewalks were lined with discarded band fliers at night. Even worse, it was all about to fade away, in tandem with the decade that spawned it.

Thirty years later, Cuomo sits in his Santa Monica home studio, which is filled with sunlight and plants, and overlooks a Zen garden outside. His wife and two kids are upstairs; his mom lives in a house he bought for her next door. He’s wearing a plaid shirt with the sleeves rolled up, gray jeans, and no glasses, which makes him almost hard to recognize. We’re listening to his heavy chugging on Zoom’s “Street Life,” with piercing vocals from his school friend Kevin Ridel. Cuomo grins, picks up an acoustic guitar (a compact Ed Sheeran signature model, for some reason), and riffs along, chuckling when the song shifts into an oddball funk feel in the verses.

Around the time Zoom began to fizzle out, Cuomo got some bad news from the Guitar Institute of Technology, the trade school for shredders he was supposed to be attending. Cuomo was educated in an ashram before the culture shock of public school at age 11, and had always been a gifted and disciplined student. But he was overwhelmed by the excitement of playing gigs and skateboarding around Hollywood, which he saw as “the center of the universe.”

“I couldn’t bring myself to get into diligent-student mode,” he says. When G.I.T. administrators told him he was “basically expelled,” he was crushed, begging them to take him back, mostly because he felt terrible about wasting his parents’ money. He still seems to regret it, though he’s amused at the notion that he may well be the only person on Earth to flunk out of the Guitar Institute of Technology and later graduate from Harvard.

Faced with all these failures, “my system of values was crumbling,” as he later wrote in a college application. “I was thinking of myself as a lead guitar player, thinking that faster harmonic minor scales equals better,” he says. “Thinking that I could move out to L.A. with Avant Garde and we were just going to be huge rock stars. Then seeing one band member after another leave, abandon me, and not being able to hold it together or put it back together.” There were nasty breakups, too, “heartbreak with two girlfriends, back to back.”

When Weezer eventually emerged with a major-label debut in 1994, a shorn and oft-bespectacled Cuomo at their helm, it seemed like they had emerged “out of nowhere,” as a then-suspicious Stephen Malkmus of Pavement puts it; he recalls raising his eyebrows at the “Pixies/Pavement-y sound” of a band with zero indie releases to its name. (He says he’s now a fan.) The guys from the Chicago alt-band Urge Overkill wondered aloud to one band member, in all seriousness, if Weezer’s record label put them together, Monkees-style. Weezer’s young fans, unconcerned with indie cred (or unaware it existed), were entirely unbothered, but many critics shared the skepticism, in an era when subtle distinctions between different brands of guitar rock seemed all-consuming and identity-defining.

“People see us now as this credible band, and they assume we always were credible,” says Cuomo. “But, man, we could not have been more hated on when we came out.” He’s never forgotten a local newspaper referring to the band as “Stone Temple Pixies,” the idea being “Stone Temple Pilots were a corporate copy of all of the cool grunge bands, and we were a corporate copy of the Pixies.”

In a way, Weezer did come out of nowhere. They exist only because of the small miracle of Rivers Cuomo’s impossibly fast reinvention, abetted by meeting just the right collaborators at just the right time. If Weezer’s detractors had seen a picture of Cuomo circa 1989, they would have considered their worst suspicions confirmed. Weezer would far outlast their initial critics, surviving long enough to win a whole new wave of them. They inspired countless emo bands, made two classic albums in a row, and became one of their era’s most indefatigable acts, tunneling through styles and decades with output of varying quality in a manner more akin to the Isley Brothers or Jefferson Airplane/Starship than any of their own alt-peers. (Their lineup has been admirably stable, too — current bassist Scott Shriner is still the new guy after 18 years.)

Weezer’s self-titled debut, a.k.a. the Blue Album, is one of the most enduring artifacts of the alt-rock age, winning teenage hearts in generation after generation, not unlike Green Day’s Dookie, released a few months earlier. It’s the geeky, equally angsty little brother of Ten and Nevermind, somehow both more sincere and more ironic than its predecessors, and in some ways bolder in its disregard for the old rules of rock; Kurt Cobain liked Marvel Comics too, but he never sang about Kitty Pryde and Nightcrawler, as Cuomo does in “In the Garage.”

By 1991, not much more than a year after Zoom’s demise, Cuomo was writing what would become the first Weezer songs; he still had his metal hair when the band played its first shows. In the space of 16 months or so, Cuomo would utterly transform his musical value system, learn to write hit songs, start singing lead vocals, and find a whole new set of bandmates. And by 1995, he would already be sick of it all. “As I get older,” says drummer Pat Wilson, “everything seems weirder, and more strange and unlikely. And that’s kind of how I look at Weezer.”

It all started at Tower Records, where Cuomo got a job while taking classes at Los Angeles City College. At Tower, he met a punk-rock dude named Pat Finn who would hook him up with his future bandmates, and introduce him to a new world of music. Cuomo knew metal, and had a quiet soft spot for pop — Madonna, Tiffany. Practically everything else was alien to him. “At first I just could not get into it at all,” he says. “It sounded like garbage to me. Velvet Underground; Pet Sounds was reissued around that time. 13th Floor Elevators, Pixies, Sonic Youth, it all sounded like noise. I thought, ‘None of this is catchy.’ But I came to love it all. Now I don’t understand how I missed it.”

He would become a serious Beatles and Beach Boys fan; on his bookshelf is a copy of Brian Wilson’s 1991 autobiography overflowing with Cuomo’s notations. But a much newer band was his greatest influence. Nirvana’s Bleach, and the 1990 single “Sliver,” with its sugary melody combined with uncharacteristic for-rock lyrics (“Grandma, take me home”), were transformative.