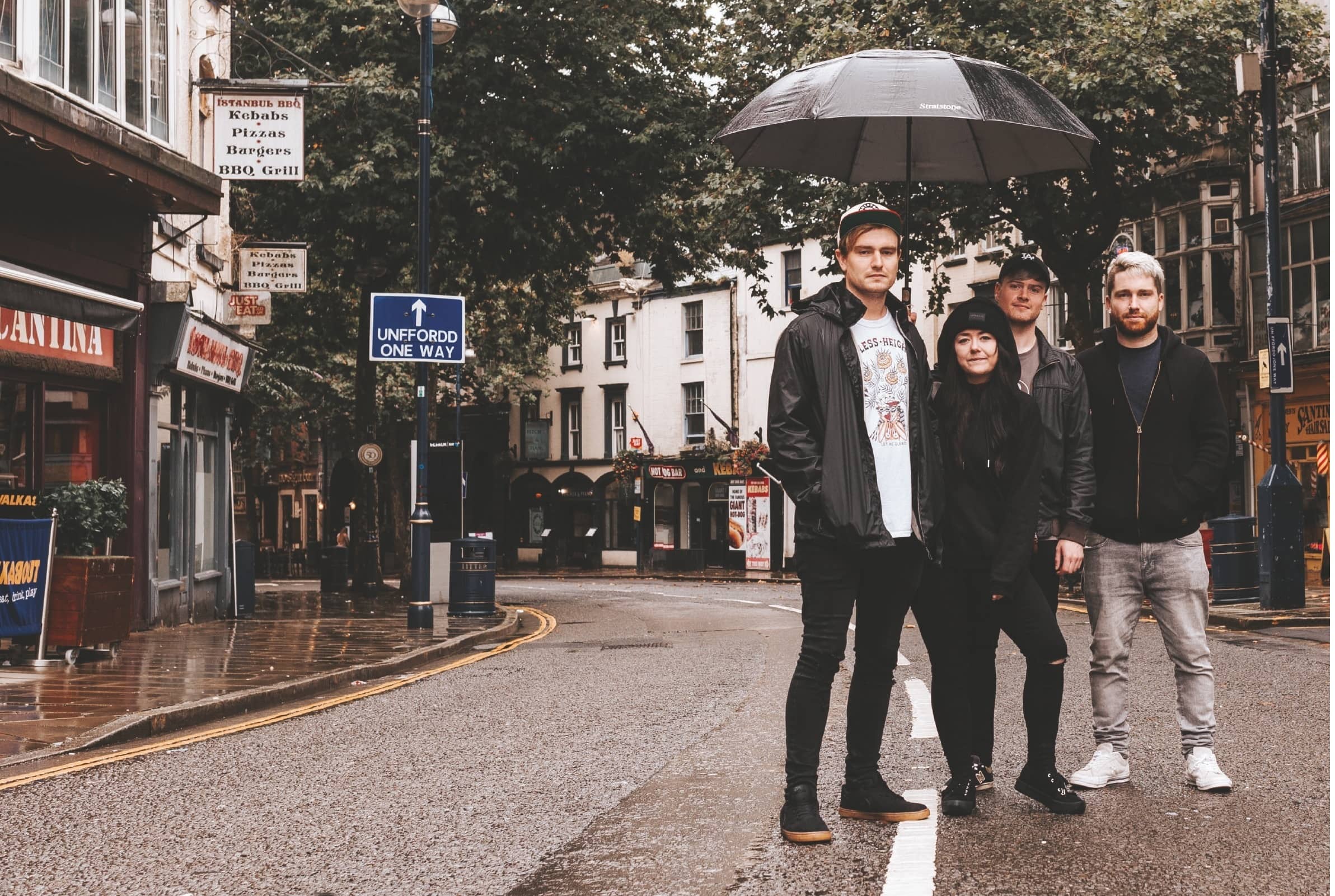 Sixteen months on from their Best British Breakthrough triumph at the 2018 Kerrang! Awards, debut album PRIMROSE PATH marks DREAM STATE’s first bid for global success. Having survived the worst that life has to offer, they show us around streets of their native South Wales to relive their mission of escape…

“Welcome to Swansea!” CJ Gilpin smiles from beneath a beanie as bandmate Rhys Wilcox opens a large black umbrella to guard against the rain. We’re on Oxford Street – not the slick Central London shopping strip, but South Wales’ stonier equivalent – under a bout of low pressure explained as the tail end of Hurricane Humberto, raging somewhere off the coast of Bermuda. “Sorry it’s so miserable,” says CJ. “It’s such a miserable street, isn’t it? Cold, miserable, freezing.”

CJ can’t control the weather, but nor are there many reasons to be miserable, given where Dream State now stand. After the 2017 breakthrough success of single White Lies (now in excess of 10 million YouTube views) and 2018 EP Recovery, the four-piece have arrived with the 4K-rated Primrose Path, ahead of their biggest UK and European shows so far.

“So much has happened that it feels like a century has passed,” says Rhys, pointing out Picton Arcade, the small mall where he gets his hair cut. “We’ll go to a couple of places today,” he adds with a smile. “The places where many regrets have been made.”

We join guitarist Aled Evans and drummer Jamie Lee to visit Sin City, the Dillwyn Street club where a year ago Dream State played a celebratory hometown show. Aled and Jamie first played together seven years before, after meeting on the Download campsite in 2011. They’d practice in the garage at Aled’s parents’ place, but were later forbidden when they discovered he had gone abroad when he was supposed to be house-sitting.

“My parents found out two years later,” he says. “My brother’s then-girlfriend let it slip that I’d been to Turkey while they were in Australia.”

The first official Dream State practices, with CJ as singer, took place instead at the Golden Lion pub in Carmarthen, where they’d rehearse in the evenings even as puzzled customers walked in.

“It was awful,” says CJ. “I hated it, but there was nowhere else to go once Aled got himself banned from his parents’ place. But then we found Rhys. He was the last piece of the puzzle.”

Rhys looks around Sin City with an air of nostalgia. By the time he joined, the band were all chipping in £20 to rehearse at Sound Haven Studios, where they’re based to this day. He celebrated his 19th birthday at Sin City, dragging his flatmates out in fancy dress to see the bands Max Raptor and Tiger Please. “I was dressed as Ash Ketchum, of Pokémon fame,” he says. “I got lots of ping pong balls and colored them in with felt tip markers. I was drunk even before we got here. I threw balls at the singer of Tiger Please. But everyone was laughing – including the singer.”