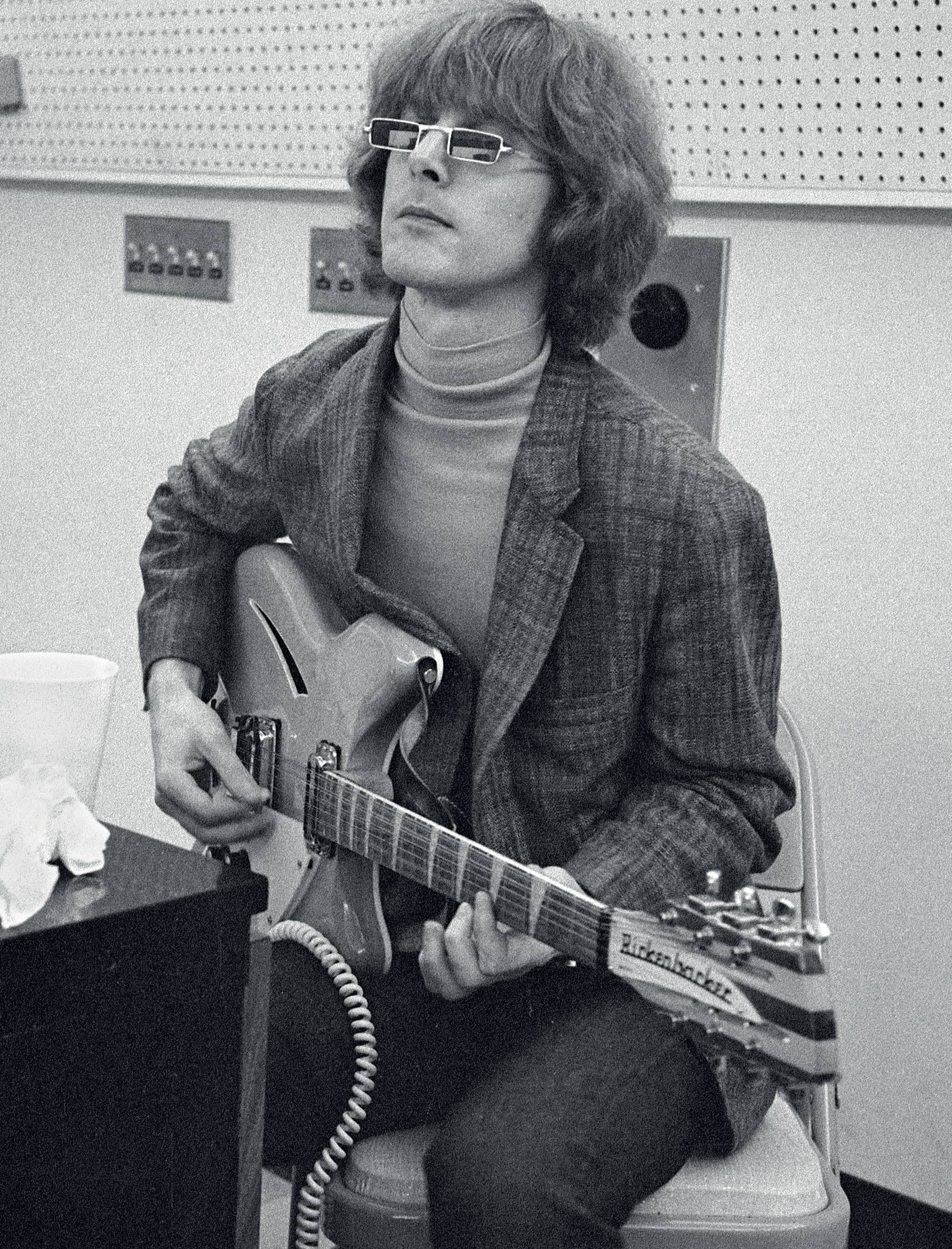 SOME GUITAR HEROES ARE ESTEEMED FOR THEIR TECHNICAL FLASH. BUT THERE ARE OTHERS WHOSE GUITAR WORK IS UPSTAGED BY THEIR CONTRIBUTIONS AS SONGWRITERS, SINGERS, TRENDSETTERS AND TASTEMAKERS — GUITARISTS WHOSE SOUND IS SO INEXTRICABLY WOVEN INTO THE FABRIC OF ROCK THAT THE WHOLE THING WOULD BE UNTHINKABLE WITHOUT THEM. THAT’S THE KIND OF GUITAR HERO ROGER McGUINN IS.

NOVEMBER 1990, I SAT IN THE CONTROL ROOM AT CAPITOL RECORDS’ STUDIO B IN HOLLYWOOD AND WATCHED ROGER MCGUINN RECORD 12-STRING ELECTRIC GUITAR OVERDUBS FOR “SOMEONE TO LOVE,” THE LEAD TRACK FROM HIS BACK FROM RIO ALBUM, RELEASED IN ’91. THE ROOM WAS AWASH IN THAT GLORIOUS, PLANGENT RICKENBACKER JANGLE THAT IS MCGUINN’S GREATEST GIFT TO THE RICH LEXICON OF ROCK GUITAR STYLES. I WAS BOTH IMPRESSED AND INSPIRED BY HIS NUANCED COMMAND OF THE SIGNATURE MODEL RICK 370/12 HE WAS PLAYING AT THAT TIME — TRYING OUT SUBTLE VARIATIONS IN PHRASING, PUNCHING IN A PULLOFF TRILL TO END A LINE MORE GRACEFULLY.

There was something familiar in the song’s ascent from E minor to G major, via a D passing chord with F# in the bass. Producer David Cole called out, “Hey, how does ‘Eight Miles High’ go?” Without missing a beat, McGuinn played the entire iconic solo that he’d recorded nearly a quarter of a century earlier, note-for-note, flawlessly.

Because I’d started playing guitar in the mid Sixties, McGuinn had always been a major hero. Not just for his playing and singing, but also the aura of serene cool he emanated back when he was still called Jim McGuinn. In junior high school, I’d had my McGuinn-style “granny” sunglasses confiscated by the school’s Dean of Discipline. Lots of kids wore them. Factories started mass producing the things when McGuinn’s band, the Byrds, became one of the biggest rock groups on the planet with the 1965 release of their debut single, an electrified cover of Bob Dylan’s “Mr. Tambourine Man.”

At the vanguard of the folk rock phenomenon, the Byrds were the bridge that led from the British invasion into the psychedelic era. They’re the pied pipers who transported us from “yeah yeah yeah” to “Purple Haze,” basically. George Harrison proclaimed the Byrds “The American Beatles.” Like Bob Dylan himself, the Byrds were, for the most part, seasoned folk musicians who’d become fascinated by the new style of electric guitar rock and roll that the Beatles, Rolling Stones, Kinks, Yardbirds, Animals and other British groups had brought to the fore.

“We were already a band and we were rehearsing and working with acoustic instruments,” McGuinn told me. “We saw A Hard Day’s Night and realized the Beatles were playing a Gretsch electric six-string, Ludwig drums and a Hofner bass. And George Harrison switched between the Gretsch and this Rickenbacker 12-string that didn’t look like a 12-string at first, because the peghead concealed six of the tuners. But when he turned sideways, I went, ‘Oh that’s a 12-string!’ I was playing a Gibson acoustic 12 with a pickup in it, but it didn’t have the kind of sound George was getting. I liked his sound better, so I went out and got a Rickenbacker 360 12-string.”

While McGuinn and his bandmates had the same gear as the Beatles, they used it to produce a distinctly different sound and overall aesthetic. What McGuinn brought to electric 12-string rock guitar was a solid grounding in folk picking — something that Harrison and other Rick-playing Brits, such as Pete Townshend, didn’t have. As a teenager in Chicago, McGuinn had studied guitar and five-string banjo at the Old Town School of Folk Music, a pioneering institution at a time when formal instruction in vernacular musical styles like folk was unheard of.

“They started around 1957,” McGuinn recalled, “and that’s when I enrolled. I was there from ’57 to 1960. I learned a lot there. I studied with [seasoned folk musician and Old Town founder] Frank Hamilton. There would be about twelve people in a class, and it was really fast learning. He’d give you a picking assignment every day. I’d go home and work on it, and we’d get another one the next day. Gradually, I got all these picking styles.” 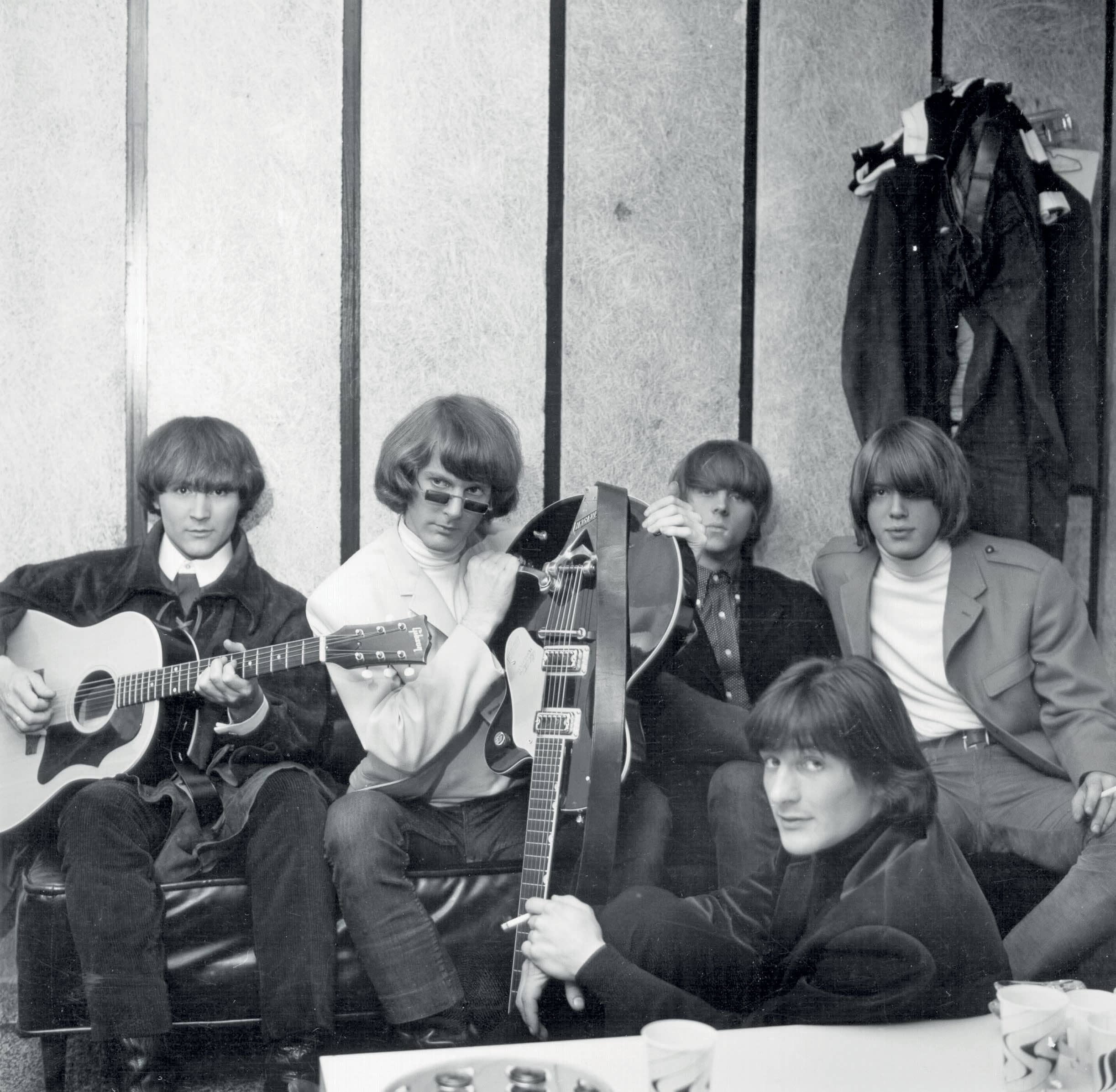 From there, McGuinn went on to work with several prominent acts in the earlySixties folk music boom — the Limelighters, the Chad Mitchell Trio, Judy Collins and even pop crooner Bobby Darin during his brief attempt to get down with the folk thing. McGuinn had sufficient traction on the folk scene to be included on the 1963 compilation album Anthology of the 12-String Guitar, along with legendary players like Joe Maphis, Glen Campbell, Mason Williams and Howard Roberts.

Because he was a fairly seasoned pro, and able to read music, McGuinn was the only member of the Byrds allowed to play on “Mr. Tambourine Man.” All other parts were played by members of the Wrecking Crew, L.A.’s famed coterie of session musicians. But McGuinn’s fellow Byrds David Crosby and Gene Clark were allowed into the studio to sing the track’s majestic, threepart vocal harmonies. All subsequent Byrds recordings, however, were played and sung by the full group, which at the time also included bassist Chris Hillman and drummer Michael Clarke.

The electric 12-string guitar was a brandnew innovation in 1964, when the Rickenbacker 360/12 became the first commercially successful model of that type. The one Harrison received from the company in February of ’64 was only the second ever made. So the field was wide open for players like McGuinn and Harrison to forge a place for this new instrument in rock music.

McGuinn’s guitar work on “Mr. Tambourine Man” says it all. Dylan’s song is a masterpiece in its own right — an imagistic, dreamscape lyric that transported the listener to another realm of consciousness. And Dylan’s own recording of his composition has a wistful, intimate quality that is deeply affecting.

But McGuinn and the Byrds made rock ‘n’ roll of it. That much is clear from the first notes of the chiming, devastatingly infectious guitar hook McGuinn crafted as the intro to the Byrds’ interpretation of the song. This was a musical singularity moment. As a rock and roll group, the Byrds had the ability to reach teenage listeners who might have still found Dylan a little too “out there.” It was the Byrds, not Dylan, who played on youth-oriented pop music TV shows like Shindig and Hullabaloo. Like the Beatles, the Byrds had an ultracool image, with Crosby’s leather capes and McGuinn’s rectangular shades perched on the end of his slender nose. Added to this, they sang beautiful harmonies and knew how to lay down a groove.

“David [Crosby] learned to play rhythm guitar like John Lennon,” McGuinn recalled, “and I tried to learn to pick and keep a beat. That was a major concern, because we came from folk music, where the beat wasn’t very important. You could skip a beat, speed up or slow down. It didn’t make any difference, as long as you got the story across. But now we were playing in places where people were dancing to our music, and what we were concentrating on the most was trying to keep a beat.”