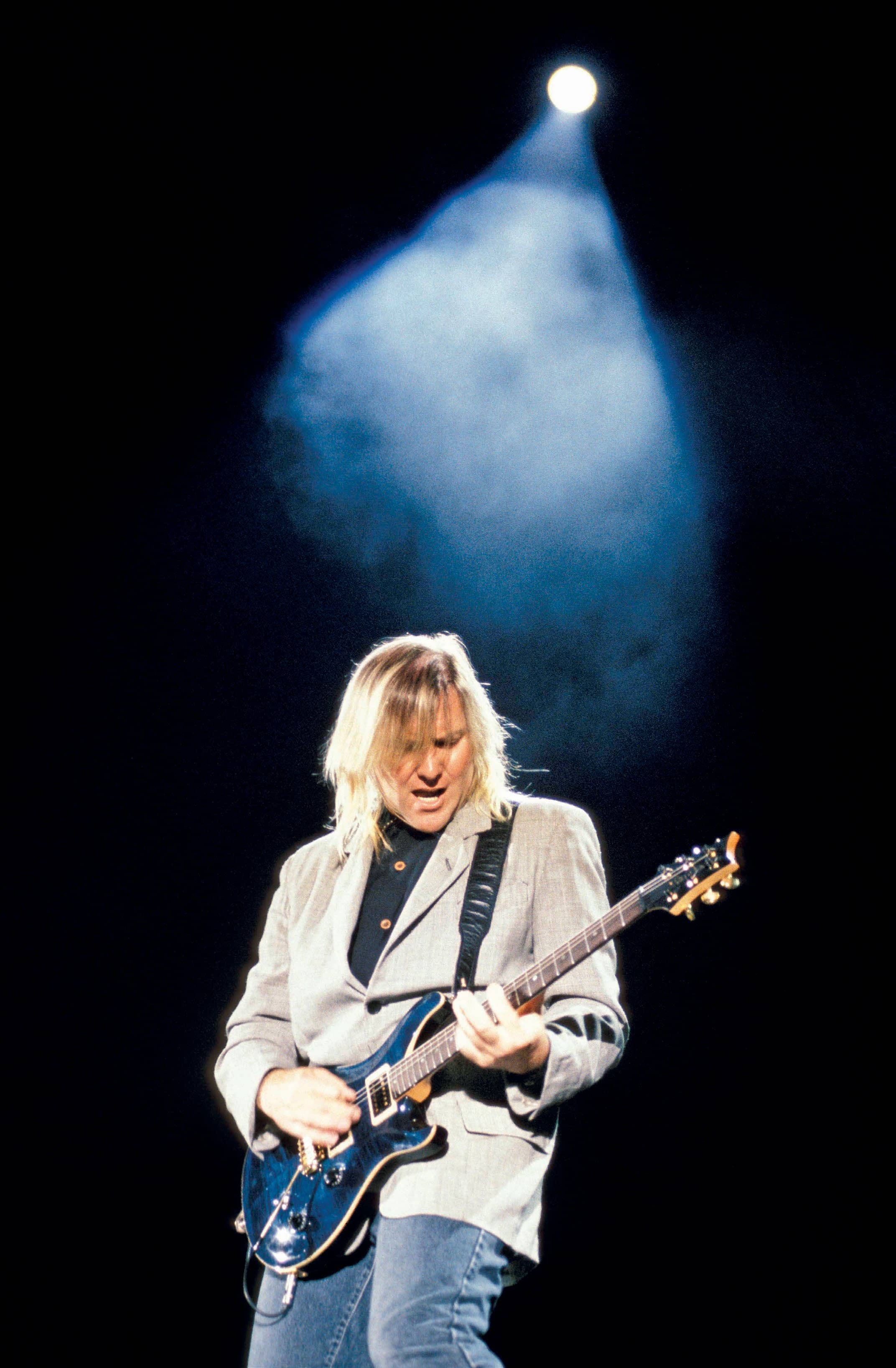 PAUL REED SMITH BUILT HIS VERY FIRST GUITAR IN 1975 when he was a student at St. Mary’s College of Maryland. Although he was just 19, he realized the only thing he wanted to do was build guitars, and he eventually dropped out of school. When Smith sold the second guitar he ever made — a copy of a double-cutaway late-Fifties Les Paul Junior — to Derek St. Holmes, who was Ted Nugent’s rhythm guitarist at the time, he realized that his dream of becoming a professional luthier could easily become a reality.

From the very beginning of PRS Guitars, artists have played an essential role in both the company’s success and the design of its instruments. When Smith established his workshop in an attic at 33 West St. in Annapolis, Maryland, during late 1975, the very first guitar he built was a custom solid-body styled after a Gibson Byrdland commissioned by Nugent. When Smith completed a new guitar, he would take it to concert venues in the Washington, D.C., area and Baltimore when major acts passed through and try to make his way backstage to show guitarists his work. Soon he was building guitars for Peter Frampton (the second guitar from the 33 West St. workshop, completed in April 1976) and Al Di Meola, and by the time Smith had built his first 20 instruments, about half of them were made for artists.

Other notable early PRS players included Roy Buchanan and Howard Leese, who purchased the first curly maple top guitar that Smith built, which was originally commissioned by another artist who flaked out on paying for it. Leese’s bandmate in Heart, Nancy Wilson, ordered a 12-string after she saw his guitar. Carlos Santana, who Smith first met in 1976 but turned down Smith’s offer as he had just started endorsing Yamaha guitars, ordered a guitar in the fall of 1980. Smith ended up making four guitars for Santana before the guitarist gave his official approval, as Santana thought the first three were “accidents of God” and the fourth finally convinced him that Smith’s guitar-making talents were genuine.

Making a guitar that Carlos Santana would play was Smith’s goal from the very start. “I figured if I could build Carlos a guitar, I’d be made,” Smith said in The PRS Guitar Book by Dave Burrluck. “We couldn’t have done it without his support. He gave my instruments instant credibility, (as did) Howard Leese and Al Di Meola. Their mark of approval was crucial. I guess I had it right.”

Hundreds of artists have joined the ranks of PRS artists since the company was officially established in 1985. Surprisingly, it took 10 years before PRS introduced its very first artist signature guitar — the Carlos Santana model. The second PRS artist signature guitar — the Mark Tremonti model — followed six years later in 2001. But since then PRS has introduced dozens of artist models, including various Private Stock, Core and SE models, as well as a few acoustics.

In celebration of the 35th anniversary of PRS Guitars, we reached out to 35 PRS artists and asked them to tell us about songs that they recorded using a PRS guitar.

Special thanks to Beverly Fowler and Judith Schaefer at PRS Guitars for their assistance. 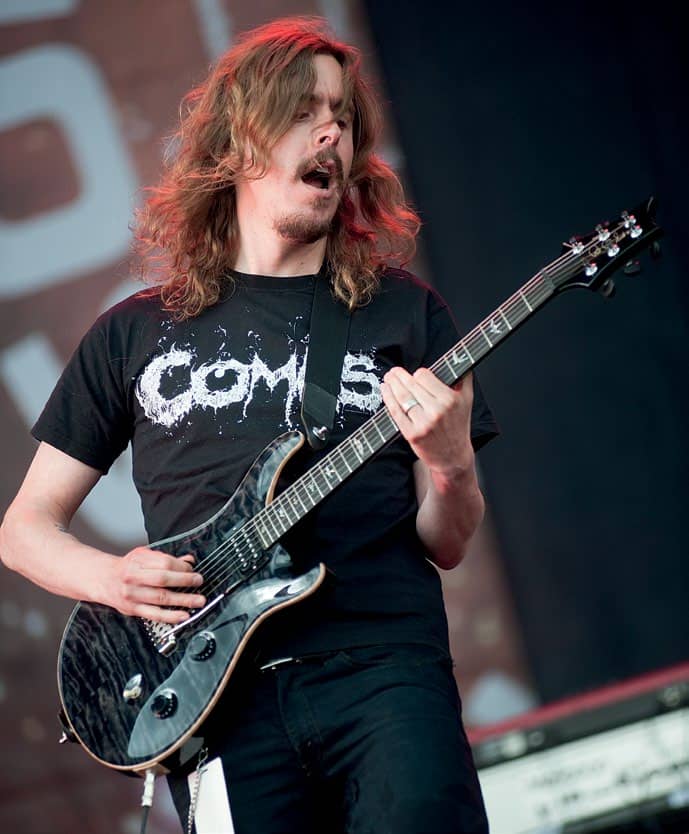 “A second-hand black CE24 that I bought from a friend became my primary tool for Opeth,” Mikael Åkerfeldt says. “The year after I bought it, I used it to record all of Blackwater Park. That guitar stayed with me for many years, both on tour and in the studio, although it’s now resting because it has massive sentimental value to me. Since then I’ve used so many different PRS guitars in the studio that I’ve lost count, really — a late-Eighties blue Custom 24, a black quilted-top Custom 24, a Modern Eagle Singlecut and many others.” 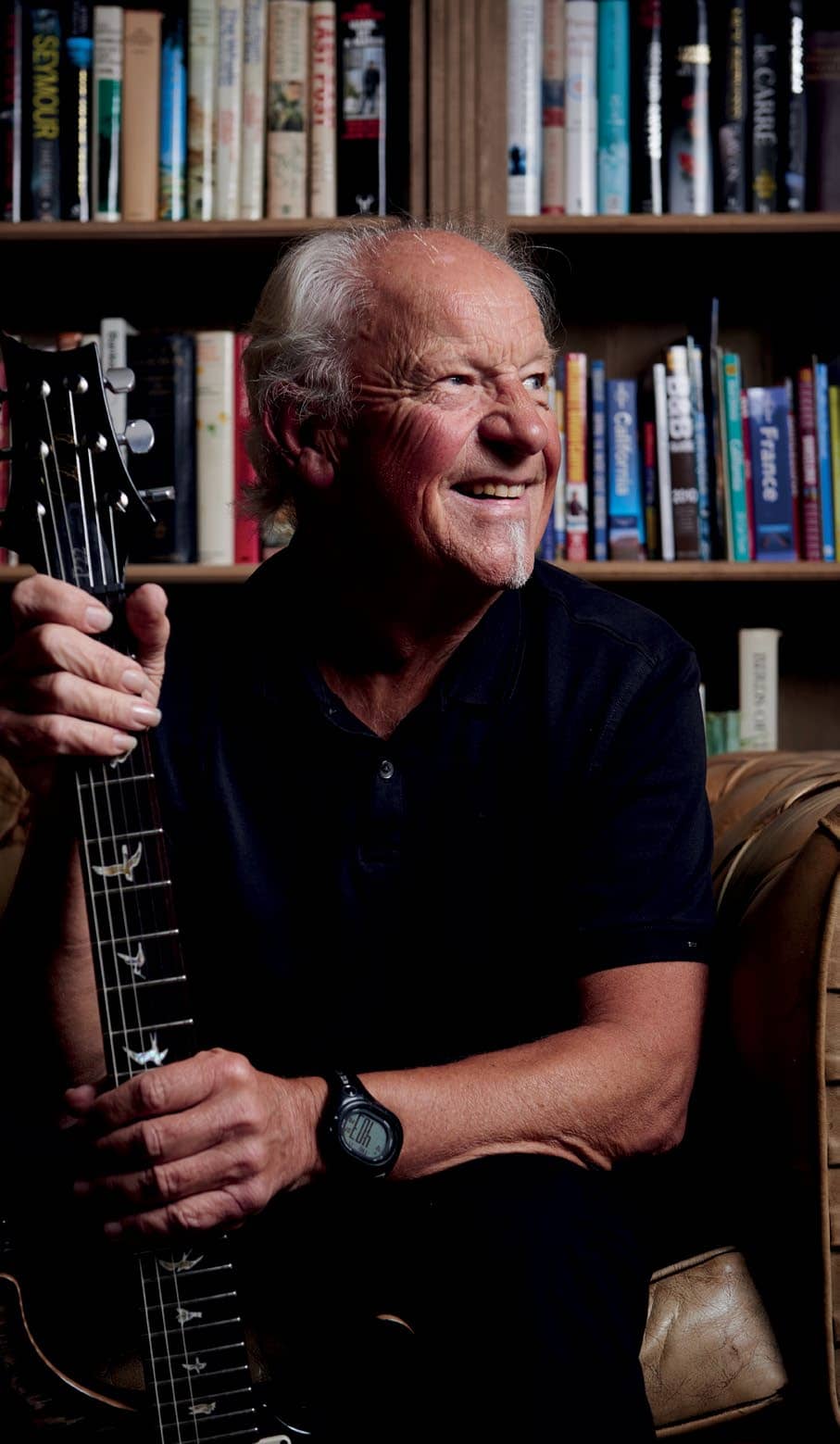 “I first was introduced to PRS around 1998,” Barre says. “I was in my local guitar store in Exeter, and my eye was drawn to a very attractive McCarty hollowbody on the shop wall. I bought it straight away, and to this day it is my first-call instrument in my studio. It’s the guitar I would grab in a hurry when the aliens invade! A few years later I started using PRS 513 guitars with Jethro Tull, both in the studio and live on stage. In 2013 we made several videos that feature my PRS collection — yes, it grew! Today I have a pair of PRS P22 guitars stored in the US and the UK, which are my current go-to stage instruments.”

“I remember that Mike Einziger from Incubus had a PRS, and it was the most aspirational guitar I had ever seen,” Delson recalls. “When my band Xero got its first publishing advance, I convinced the guys to let me spend a portion of it on my first PRS — a blue CE24. Later, that became the main guitar I used to record Hybrid Theory. I’m pretty certain I used it on ‘One Step Closer,’ which epitomizes the iconic sound of that guitar in drop C# tuning through a Mesa Boogie Dual Rectifier.”

Al Di Meola was one of the very first artists to play a Paul Reed Smith guitar. During the mid Seventies, he ordered a custom 12-string electric from Smith, which Di Meola played on “Elegant Gypsy Suite” from Elegant Gypsy. However, about 30 years passed before PRS introduced its first Di Meola signature model, the Prism, in 2008. “Designing my signature model with Paul was one of my most enjoyable experiences,” Di Meola says. “It has the most beautiful finish ever! I’ve owned a lot of PRS guitars, and I’ve recorded many albums with them: Soaring Through a Dream, Tirami Su, Consequence of Chaos, Elysium and Opus, to name a few.”

“Crawling in the Dark,”

“I rented several guitars when Hoobastank recorded our first album,” Estrin says. “Two of them were PRS Custom 24s, and they sounded killer! I recorded a lot of the first album with both of them, including our first single, ‘Crawling in the Dark.’ A few years later while we were on tour, I took a trip to the PRS factory. They took me around the factory, showed me how everything went down and introduced me to a lot of the amazing people who work there. When we got back to the artist relations rep’s office, he asked if I would like to have a custom PRS built for me. I was so stoked!”

“Are You Listenin’ Lucky?,” Joe Ely

“I used a 1985 Seafoam Green and a 1987 Goldtop Standard 22 for many years,” David Grissom enthuses. “The Goldtop was my main guitar in the late Eighties. It had the headstock broken twice and seemed to sound as good or better after each repair. I switched to a McCarty when that first came out, and I’ve been playing various DGT [David Grissom Trem] models since 2007. Every record I’ve ever played on — including all my solo records, Storyville, Joe Ely, John Mellencamp, Buddy Guy, John Mayall and Robben Ford — has been with one of my PRS guitars.”

“In Rollins Band, the PRS’s pushed out all my other guitars,” Haskett says. “A PRS is pretty much all you hear on anything I did after 1991. Rollins Band was a hard band to capture in the studio, but of all our recorded material, I think ‘Disconnect’ from Weight is one of our best. My PRS guitars, especially the opaque black CE24 Bolt-On with a Wide Thin neck and three-way toggle replacing the rotary switch that was my main guitar, are like a pair of classic jeans: over the years they don’t wear out, they wear in.”

“My very first PRS guitar was a gray-black Custom 24,” Haynes reminisces. “I recorded all of the Dickey Betts Band album Pattern Disruptive and a lot of the Allman Brothers album Seven Turns with that gray-black guitar. In the video for ‘Seven Turns’ there’s a long slide solo at the end that features this guitar. I also have a black guitar that Paul built for Dickey Betts, which was made with a lacquer finish that gives it a different sound. It has ‘Custom Built for Dickey Betts’ hand-written on the back of the headstock.” 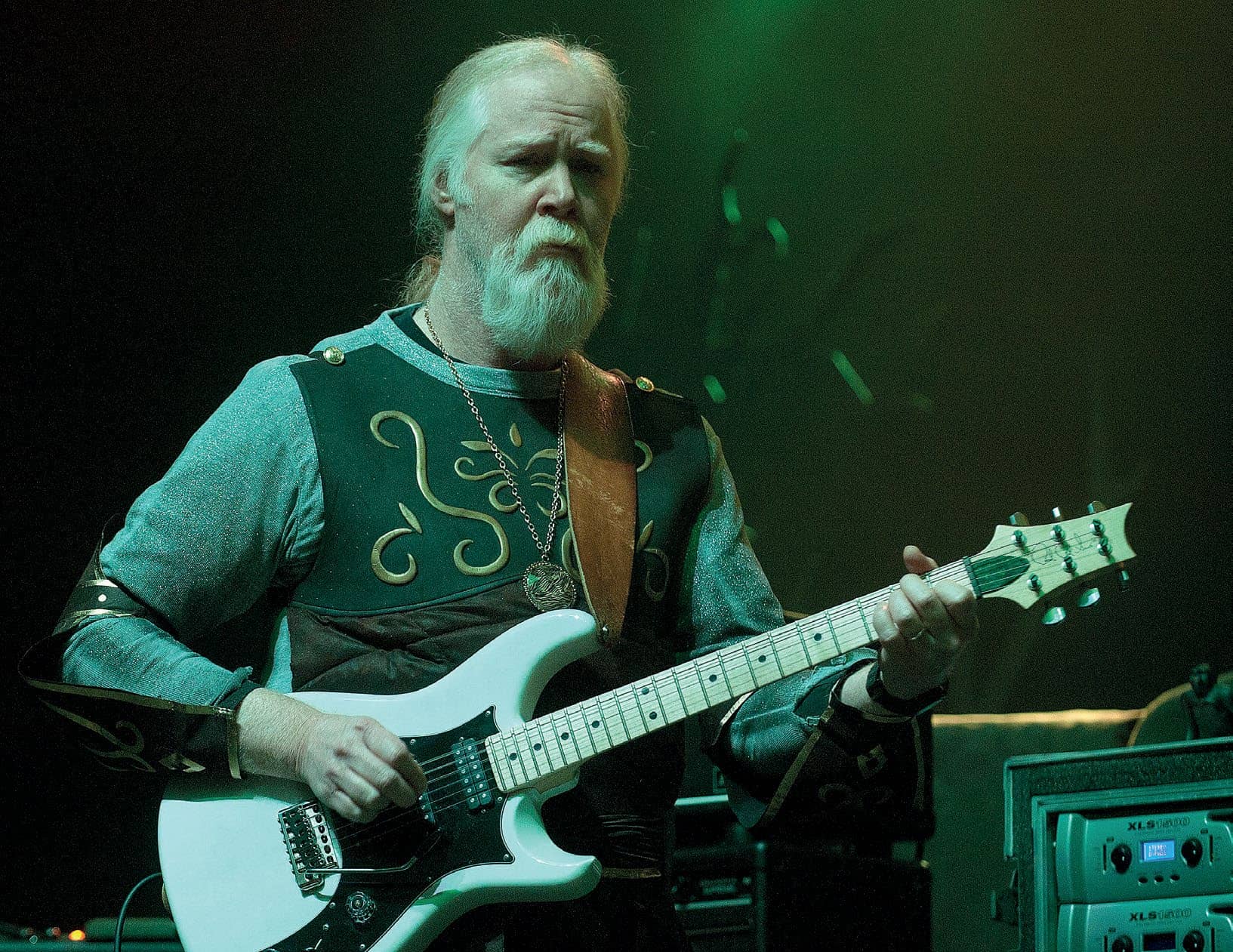 “‘It’s Not My Time’ was recorded with the prototype of my signature Singlecut model,” Henderson says. “I became a big fan of the Singlecut model when 3 Doors Down shot the video for ‘When I’m Gone’ in 2002 on the deck of the USS George Washington off the coast of Portugal. I used the first Singlecut I ever got from PRS for that. At one point it was knocked off a stand, fell from the stage and landed on the steel deck. Even though it fell more than 5 feet, it was still in tune and played true! I sent it to the factory for repair, and they gave it a flame ‘hotrod’ paint job. That guitar has been all over the world and through the ringer — it was even stolen and recovered — but it still sounds and looks great.”