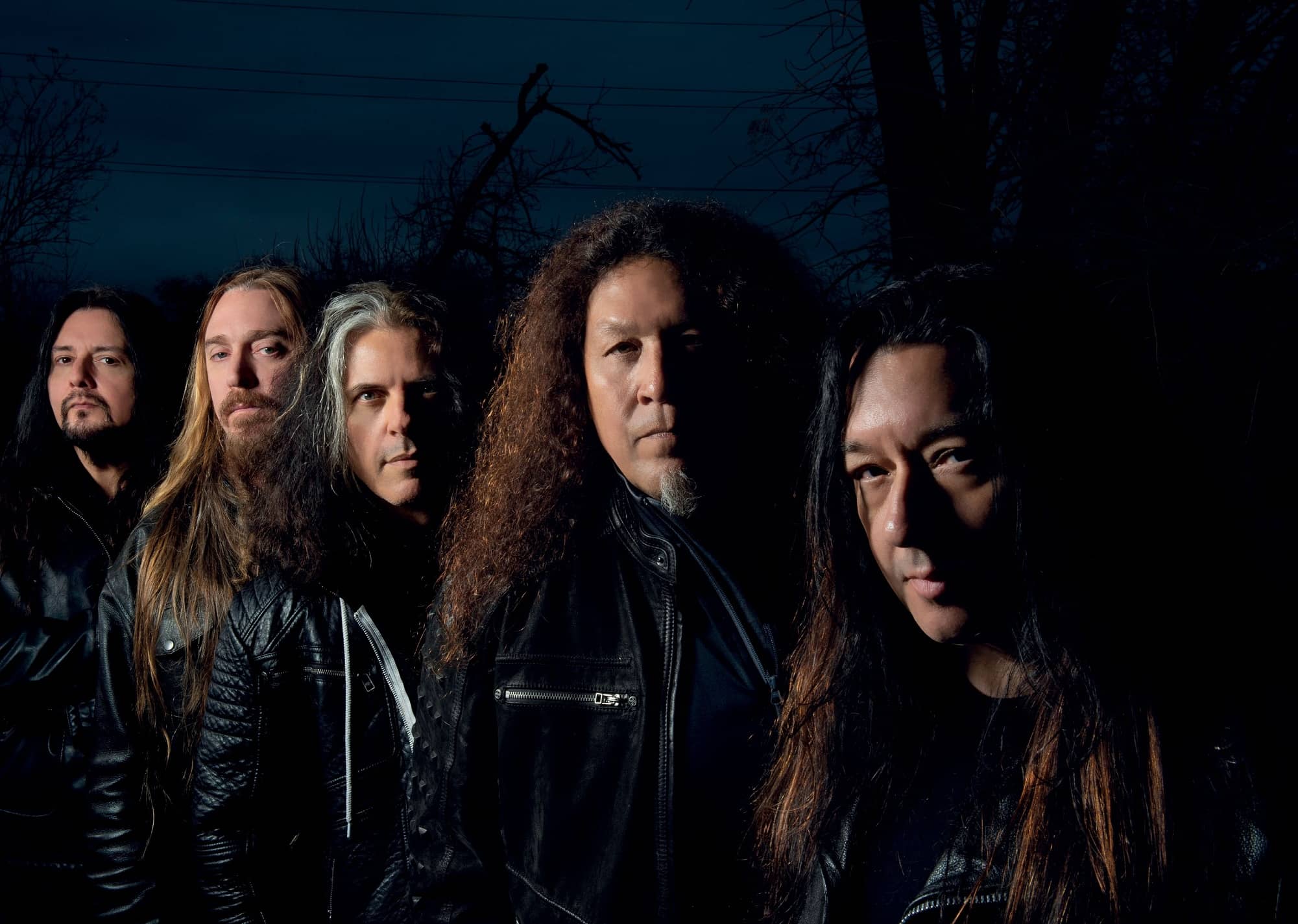 TESTAMENT bring the metal to the masses with Titans of Creation, the 13th chapter in their canon of symphonic savagery. Guitar World checks in with guitarists ERIC PETERSON and ALEX SKOLNICK and gets a glimpse inside the making of the legendary group’s latest thrashterpiece.

2020 STARTED OFF WELL ENOUGH, BUT IT UNRAVELED SEEMINGLY overnight — by early spring, we found ourselves crushed under the weight of unprecedented distress and uncertainty, trapped in a world fraught with as much disease as dis-ease. By the time April came limping into view, there wasn’t much anyone could put their faith into — that is, unless you’re a fan of classic American thrash metal. When Testament unleashed its 13th studio album, Titans of Creation, on April 3, it gave Gen-X metalheads a reason to rejoice — a reason to celebrate during a time of great discomfort. It also served as a bludgeoning reminder that Testament is still at the top of its game 33 years after the release of its debut album, The Legacy.

And that’s really what the metal community has come to expect from Testament through all these years — that the thrash veterans from Berkeley, California, will be there when they need it most, no matter what. Since first emerging from the Bay Area in the midEighties, Testament have been through an abundance of turmoil and disruption, including a dizzying number of lineup changes and singer Chuck Billy’s bout with cancer in 2001 — yet here in 2020, the band sounds better than ever.

Titans of Creation is the sound of a band in peak form. Songs like the album opener “Children of the Next Level,” “Night of the Witch” and “Code of Hammurabi,” one of two tracks written by lead guitarist Alex Skolnick, showcase the immense talents of each member of Testament. Peterson’s riffage is relentless and inspired, Skolnick’s soloing is majestic and soaring, Gene Hoglan’s drumming is everything you’d expect from the legendary skinsman, Billy’s vocals have a refreshingly classic quality and bassist Steve DiGiorgio takes advantage of a few moments in the spotlight to remind everyone why he has been considered one of the best in the business since his turn of-the-Nineties days with Sadus, Autopsy and Death.

Skolnick attributes the high level of quality achieved on Titans of Creation to the fact that the band took its time putting the album’s pieces together. “The previous record [2016’s Brotherhood of the Snake] I feel was a very rushed process,” says the guitarist. “With that record, it was like we were in the middle of touring, then all of a sudden there was a sense that we were really behind in terms of making a new record. Like all of a sudden, it was crunch time. This time, we talked about it while we were on tour and said, let’s not have that happen again — let’s at least discuss a rough game plan for the record. We made sure that we had more time together to play and for all of us to make suggestions, because on the last record Eric became more of the decision-maker and there just wasn’t enough time for everyone else to weigh in.”

As Titans of Creation was making its way into the hands and hearts of clamoring, quarantined Testament fans all over the world, Guitar World caught up with Skolnick and Peterson to discuss the making of the record and look back at some of the pivotal moments in the group’s stormy yet successful 33-year history.

In the 33 years since Testament released its debut album, The Legacy, the band’s sound has undergone some fairly dramatic changes in tone and style, creating a distinct difference between, so to speak, old Testament and new Testament. When you look back at the group’s evolution, where would you say that shift began to take place?

ERIC PETERSON I would say it was after our fifth record, The Ritual [1992]. We did five records in five years, and I think by our fourth album, Souls of Black, there was some good stuff on there, but it wasn’t groundbreaking like the first three. And a lot of our fans were starting to turn their backs on us because music was changing, we were changing, grunge had come in and just sideswiped metal and alternative was getting big. With The Ritual, I think we were trying to be more heavy metal as opposed to thrash, and I wasn’t that happy going in that direction. Songs like “Electric Crown” and “Return to Serenity” are great songs, but we couldn’t get any stronger than that — it just felt like our feet were in the mud. Around that time in the early Nineties you had albums like Sepultura’s Arise and Pantera’s Vulgar Display of Power, and I was like, “That’s where I want to be,” but it didn’t happen with The Ritual. After Alex left in 1992, we came out with Low [1994], and that was more like it — that was like a new beginning for us. We brought in James Murphy on guitar for that record, and it was great to have someone who could play like Alex but who also loved that kind of music — the truth is, Alex was never really into the heavier stuff like that; things like Cannibal Corpse and Death and other bands like that at the time. He just needed to get out and do his own thing. So it was around that time that we took on this new sound, and that went from Low into Demonic [1997] into The Gathering [1999]. By the time The Gathering came around we had already been through a bunch of lineup changes and we had gotten stronger because of it. The years leading up to that had been so weird with all the changes in the band and changes in the music scene, and by the time we did The Gathering we had built ourselves back up again and people were getting excited about our music again.

Eric, you’ve been the musical leader of this band since the very beginning. What would you say was perhaps the darkest period for Testament?

PETERSON It was probably around the time of The Ritual. I remember Atlantic Records telling us that we had only sold around 250,000 records that year — which would be amazing now [Laughs] — and we were down about that. We lost our management around that time, Alex told us that this was going to be his last tour with Testament, and Lou [drummer Louie Clemente] left — so everything was kind of falling apart around then, but we were still hopeful. So we changed some things around, changed how we did business and formed our own record company and things like that — and just when it seemed that we had gotten a hold of things again, that was when Chuck got sick [In 2001, lead singer Chuck Billy was diagnosed with a cancerous condition known as germ cell seminoma].

But even after all that, we kept it going, and we got heavy again, and I think that was the start of the new Testament. We developed a more modern sound and had more of a black and death metal influence, even though we were still very much a thrash band. We just weren’t trying to be politically correct with our lyrics and all that — I mean, come on, we put out a record called Demonic. [Laughs]

By that point, we had gone through a couple of different guitar players, a lot of drummers, we were having problems with our original bass player [Greg Christian] — and we weren’t really sure what we were going to do. So we ended up doing a record called First Strike Still Deadly [2001], which contained re-recorded versions of some of our older songs. When I go back and listen to The Legacy or The New Order [1988], I’m not blown away by the production, but the songs sound modern when we play them today — they sound great, and that was what we were going for with First Strike Still Deadly. 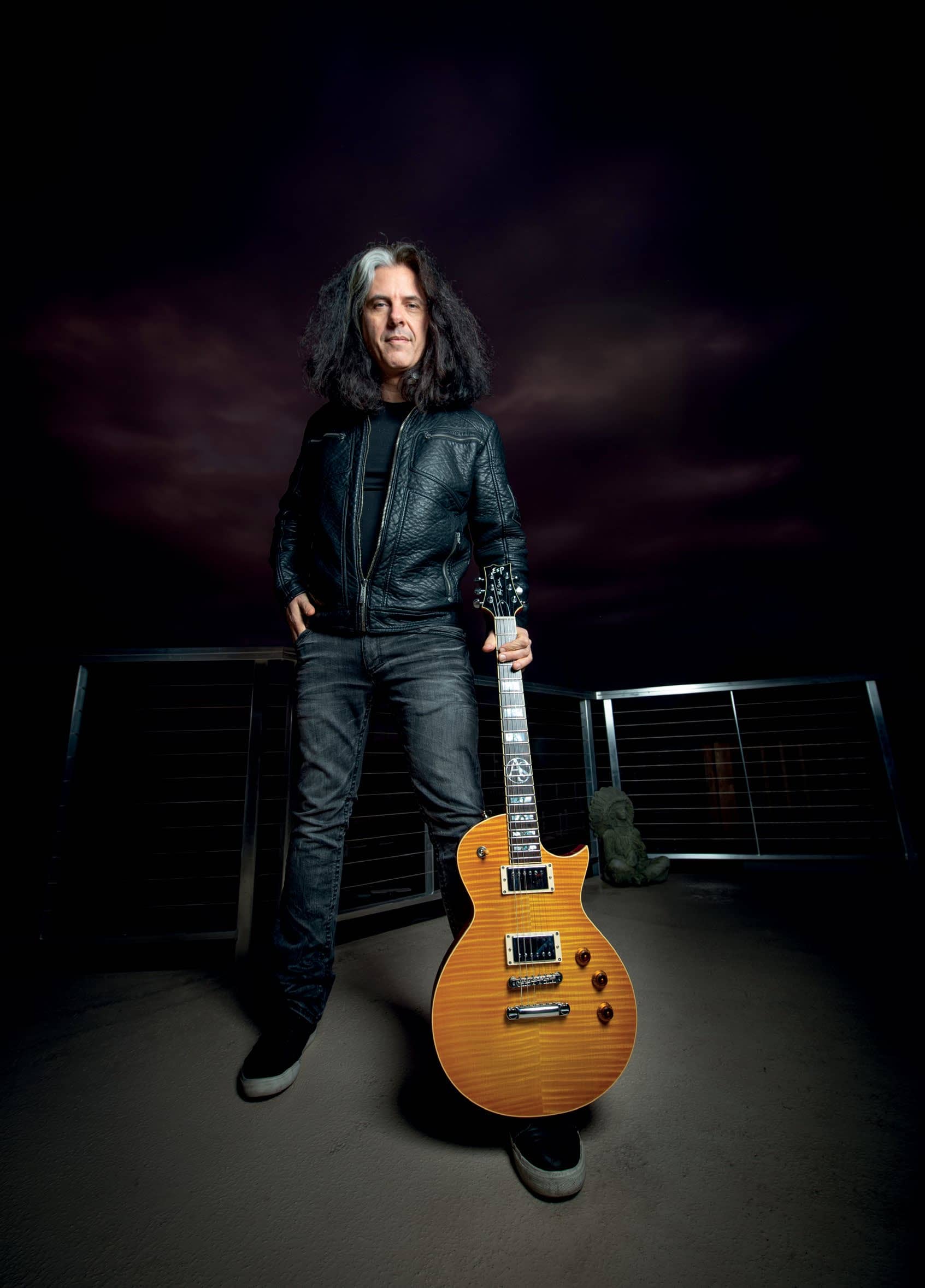 Titans of Creation is the band’s 12th studio album of new material. When did the record first begin to take shape?