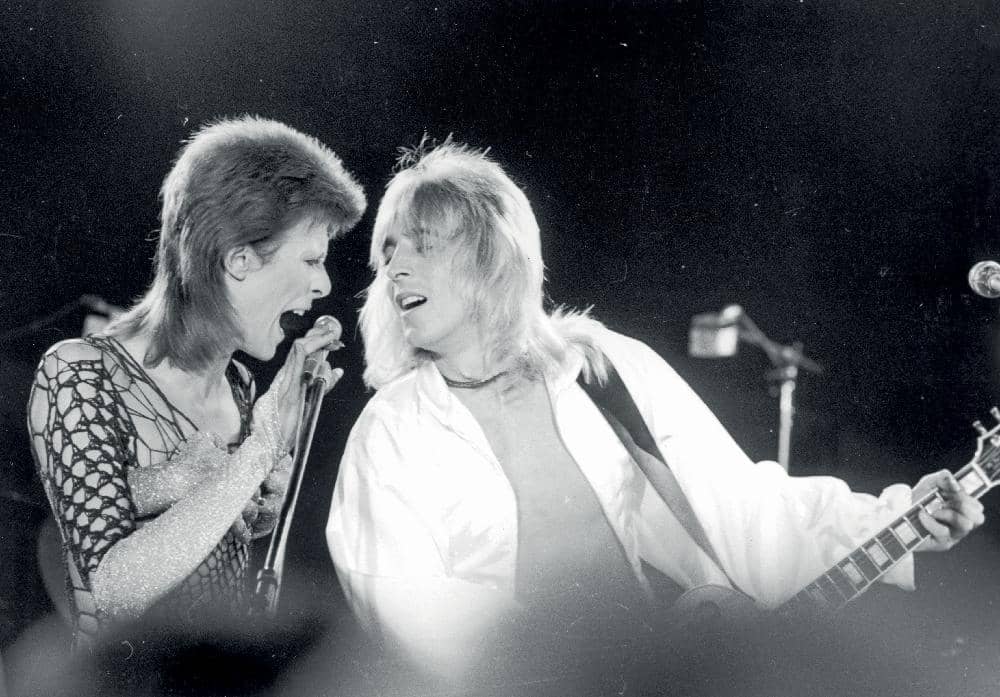 Fifty years after its release, DAVID BOWIE bassist TONY VISCONTI recounts the making of The Man Who Sold the World — and the rocking influence of guitarist MICK RONSON

David Bowie’s third album, The Man Who Sold the World, was released in the U.S. in November 1970, before getting its release in Bowie’s homeland (the U.K., of course) in April 1971. It marked a notable change in Bowie’s songwriting and musical direction, featuring hard-rocking riffs and extended guitar heroics from legendary axeman Mick Ronson, and seemed to be the stepping stone between the “hippy folkie” Bowie and the glam-rock god.

Ronson became Bowie’s essential sonic and visual foil, and his influence extended beyond the first flush of glam rock into punk and metal, both American and British. Randy Rhoads saw Ronson playing live with Bowie in Santa Monica in 1972 and borrowed his choice of guitar and haircut from Ronno. Cult guitarist Billy Duffy has often cited Ronson as his primary influence. Ronson went on to a solo career after Bowie disbanded the Spiders from Mars in 1973, and also performed with Bob Dylan and Ian Hunter before his untimely death from cancer in 1993. (Ronson fans should check out the box set Only After Dark, released late last year).

TMWSTW was produced by Tony Visconti, who also played bass with Bowie at that time. To mark the 50th anniversary of its release, Visconti was happy to discuss the making of the album and the challenges of recreating it live in its entirety in his current band, Holy Holy, which, incidentally, features former Spider from Mars Woody Woodmansey on drums.

The Man Who Sold the World marked a shift in direction to a harder, rockier sound. You were playing bass with Bowie at the time. What influenced his change in direction?

We felt we had had enough with the folk-rock influence of the Space Oddity album. Since all those songs were written on his acoustic 12-string, it had a gentler sound overall. We had met Mick Ronson during the mixing sessions, and we were very impressed with him. He was one of the clappers on “Wild Eyed Boy from Freecloud” during the mix session. We wanted the next one to sound a lot tougher and more experimental.

What did Mick Ronson bring in terms of that tougher approach?

He really loved Cream and extolled their virtues. We heard some of his work with the Rats [the band he was in prior to hooking up with Bowie], via drummer John Cambridge of Junior’s Eyes. John was actually up for TMWSTW then Mick told us all about Woody Woodmansey, who got the job as drummer. Mick insisted from the beginning of the album, “If we’re going to play in the same band, you’d better listen to Jack Bruce.” I did, and I think I rose to the occasion.

Can you remember what gear Ronson was using?

He had a black Les Paul Custom — his only guitar, as far as I know. When he came to live with us — me, David and his wife Angie, in Haddon Hall, in Beckenham — all of us took turns sanding down my Strat and staining it clear. He wanted us to do the same with his Les Paul. We all took turns — John Cambridge, Bowie, me and Roger, our roadie. He had a Marshall head and a 4x10 cabinet. I don’t remember the name of the head, but it had three knobs, volume, treble and bass [presumably the Marshall 200 Major, 200-watt head often referred to as The Pig]. He always had the three knobs set to 10. He would control the volume with his guitar volume. He also had a wahwah pedal that he used in fixed positions for mid-range boost.

Was Bowie very open to suggestions? Was he fairly rigid on his original conception or was there much room for maneuvering?