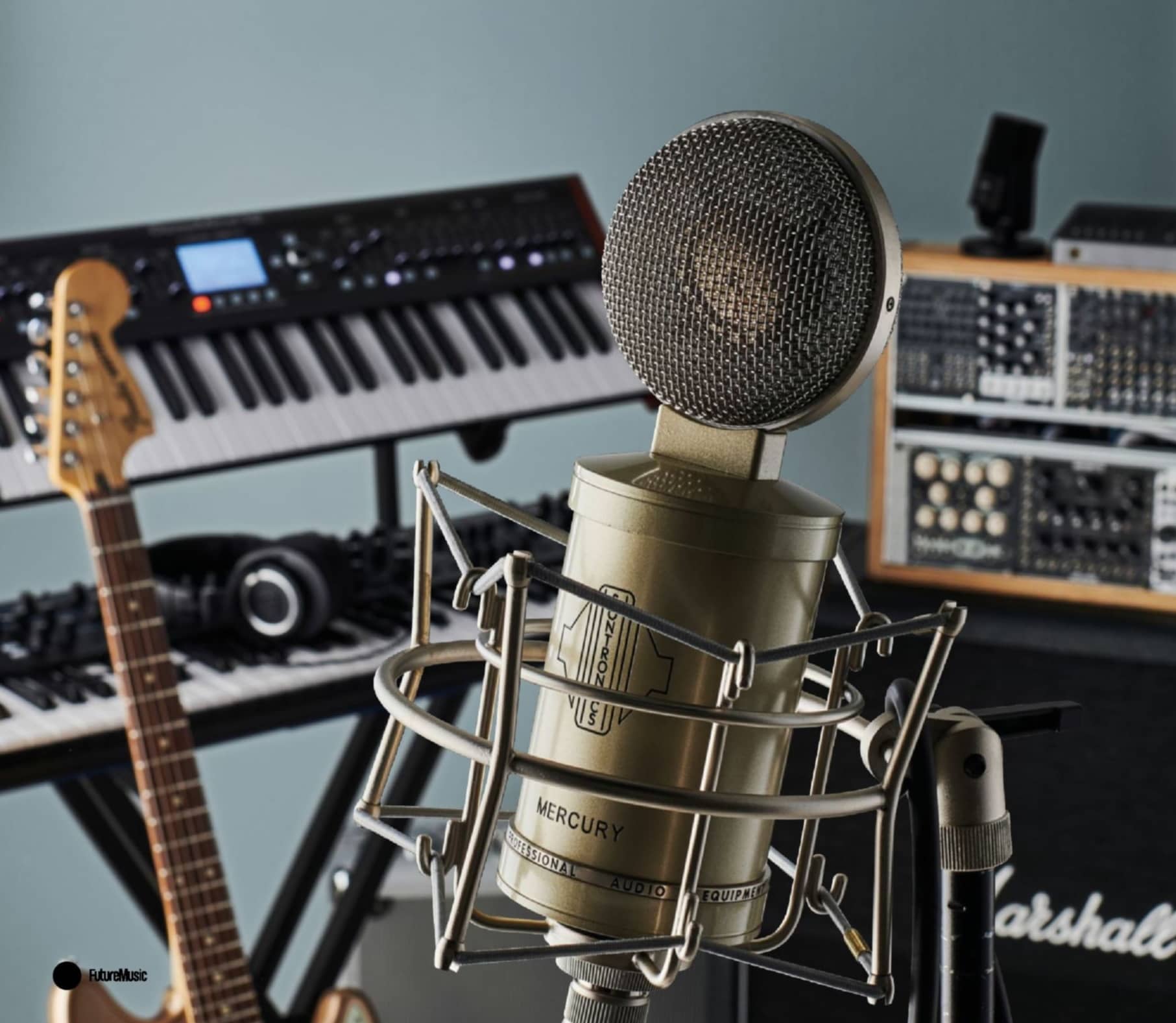 Let’s explore the art of recording, from pristine, carefully prepared studio sessions, all the way through to more deliberately lo-fi recordings

When something moves and causes the air around it to vibrate, magic can happen. You know this from before you are born; the vibrations you hear all around you, from your mother’s beating heart to the sounds which reach you from outside that become familiar and trusted. When you’re out in the big wide world, those sounds become more detailed and magical. What it means to ‘record sound’ is to find a way to capture that vibrating air by using finely-calibrated equipment to register, amplify and convert those vibrations into something which can be heard over and over again, or manipulated, treated, or re-recorded, into countless iterations of that original source. To put a microphone in front of a musical instrument, whether it’s a drum kit, or a violin, or the human voice, is to prepare for the sonic cataloguing of a unique moment in time, where a new set of acoustic vibrations will take place, affording you the unique honour of being there to make them part of your productions. A responsibility not to be taken lightly, we’re sure you’d agree.

Engineering and worlds of sonic possibility

Close your eyes and think of an acoustic drum kit. We’re going to discuss the best way to mic it up. Hopefully, there it is in your mind’s eye, complete with a hefty kick, a big deep snare, three toms, perhaps, plus hi-hats, crash and ride cymbals. Oh but, hang on. Is the sound you’ve got in mind a kind of stadium rock sound, the likes of which you might hear on a Coldplay or U2 record? Or is it funkier? Maybe you’re a fan of old-school soul or disco? Maybe you’re drawn to jazz, in fact, and want a kit which will work well with brushes rather than sticks or respond well to a delicate lightness of touch. In which case maybe you don’t want such a big deep snare at all, and you might not need all three toms. Similarly, maybe you’re a fan of ’60s rock ‘n’ roll and, for you, the whole feel of the drums is much less fizzy and high fidelity than some of the other kits we’ve talked about. In which case, let’s be less hasty, not assume that all drum kits sound the same, and make sure that the kit we’re going to work with is an appropriate choice for the music we want to record. And then, we can start to think about microphone choices. But, of course, just as the choice of kit itself is important, so is the array of microphones you could potentially use to record it. Do you want a close-miked sound, to give you a wide variety of options at the mix stage, or do you want to get a sound which is much more heavily reliant on your chosen recording space and print a roomier sound with just a pair of overheads and, maybe a kick microphone? The critical thing about recording drums, or indeed recording any instrument, is to experiment with both the instrument and the microphones you have at your disposal. Engineering is an art which, fortunately, is resurgent after many of us rather lost sight of it for a while. In many musical contexts, we were perhaps guilty of being seduced by hard-disk recording and the plethora of ‘believable’ software instrument libraries which sated our desire for ‘the real thing’. Why mic up a drum kit, when there are software drum libraries designed to make your life easier? For a couple of great reasons. Firstly, your sound will be unique. Secondly, it’s beyond satisfying to spend time selecting microphones, moving them closer and further from sound sources, making test recordings, appraising sounds and comparing the results. It’ll make you focus your ear, teach you loads and make for better music. Just as we get cross at producers who just flick idly through presets rather than learning the art of sound design, don’t be lazy about engineering. It makes all the difference. 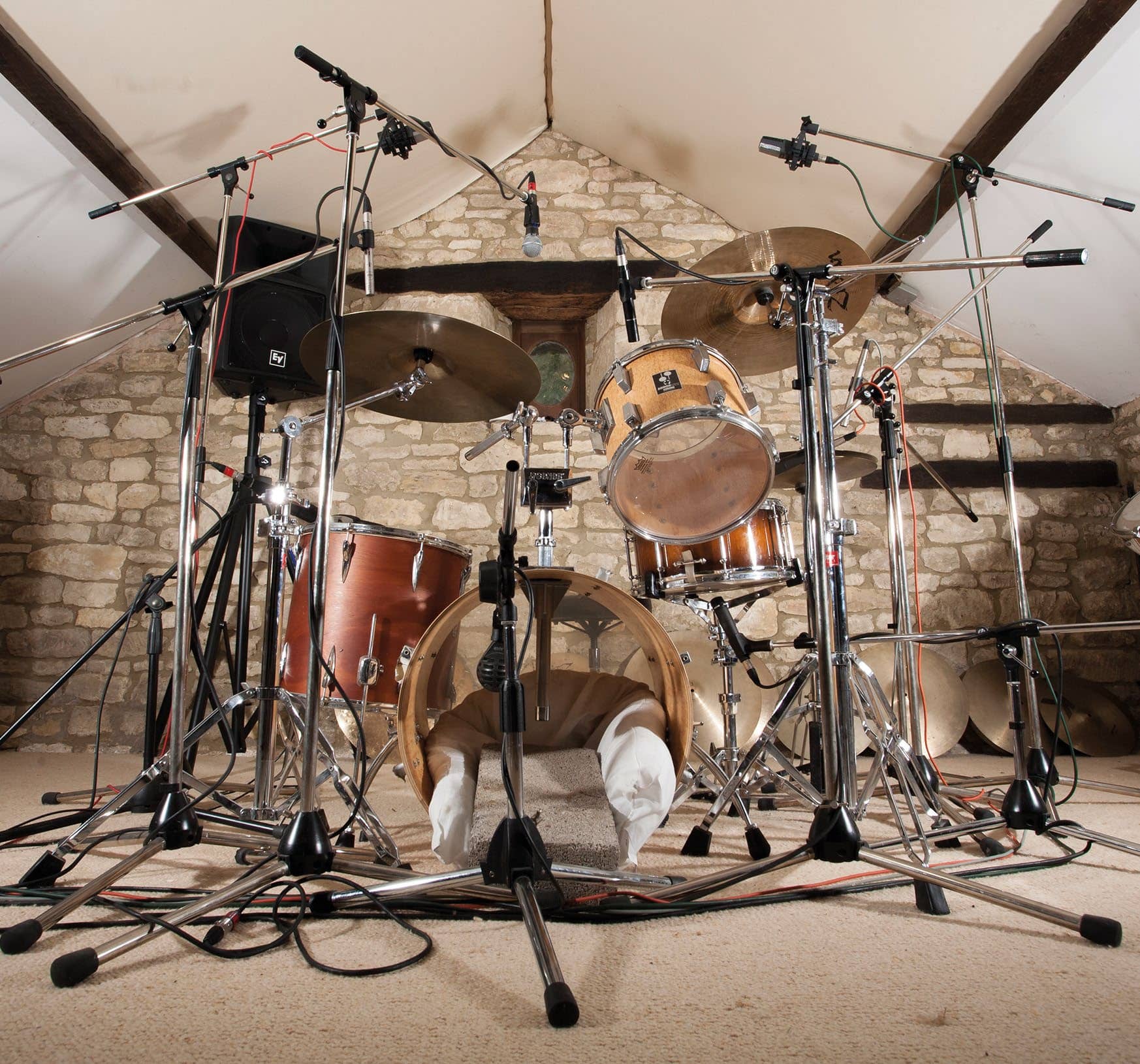 It won’t have escaped your notice that there are a lot of microphones out there. To make the right choices for the recordings you want to make, let’s start by cutting to the chase, by having a look at some of the most common microphone types there are. The two most common are condenser and dynamic microphones. Broadly speaking, condenser microphones are considered the ‘better sounding’ option. They require 48V of phantom power, supplied from an amplifier (or preamp) or directly from your audio interface and, generally speaking, they pick up a more detailed, richer range of frequencies over a wider volume range than their dynamic counterparts. They tend to be much more physically delicate and will always require mounting on a mic stand. They’re often much less directional than dynamic microphones, meaning they’re a great choice if you’re looking for a mic to capture ambience (the sound of the room around your chosen sound source) but are a much less good option on stage. By contrast, dynamic microphones tend to be more robust, can often be hand-held and are much more directional in sound, albeit often at some cost to the level of detail captured at the recording stage. So that’s easy, right? If you have the budget, you buy a condenser microphone and if you don’t, you have to slum it with the dynamic brigade? No, not at all. The crucial question to ask yourself is what and where are you going to be recording and which microphone is best suited to that job. If you’re planning to record a drum kit, you’re likely to want to put dynamic microphones on a number of individual kit pieces. Their lower gain means that they won’t overload even when facing loud source sounds and their more directional sound means less spill from neighbouring kit pieces. The same can be said of miking up electric guitar cabs; for many engineers, a well-placed dynamic mic is nearly always the way to go in those contexts. However, it’s equally true that, if you’re recording delicate vocals and you want a warm, detailed, open sound, condenser microphones win out nearly every time. Going back to that drum kit, if you’re working with overhead mics above the kit to produce an open, roomy, stereo sound, they’re a great choice there too. Already, you can begin to understand why recording studios pride themselves on having an extensive microphone cupboard; to allow engineers to match the characteristics of a particular microphone to a particular sound source. And this is also how particular mics develop a reputation for being a great match for certain instruments. Neumann’s U87 is an established vocal choice, just as Shure’s SM57 is never far from a snare in many studios. These days, most audio interfaces allow you to connect a mic directly and, if relevant, enable phantom power, all of which can have you ready to record in seconds. However, it remains the case that many studios use specialist preamps outside those directly inside an audio interface. Preamps are needed to convert the energy of a ‘weak’ signal that is a mic picking up vibrations in the air and to turn this into an electrical signal (measured as a voltage) which can be recorded. A good preamp does this voltage shift without introducing unwanted noise or distortion and, indeed, the very best units ‘colour’ the signal in hugely pleasing ways, due to carefully chosen components. In real terms, such units change the sonic character of a sound to make it tougher, or sweeter, or more open. So in studios, you’ll find that the signal chain you’ll work through is Microphone > Preamp > Audio Interface > DAW, whereas in project studios, Microphone > Audio Interface > DAW is more common. If you’re planning to buy a mic, do extensive research into the mic choices which were made for records you admire. 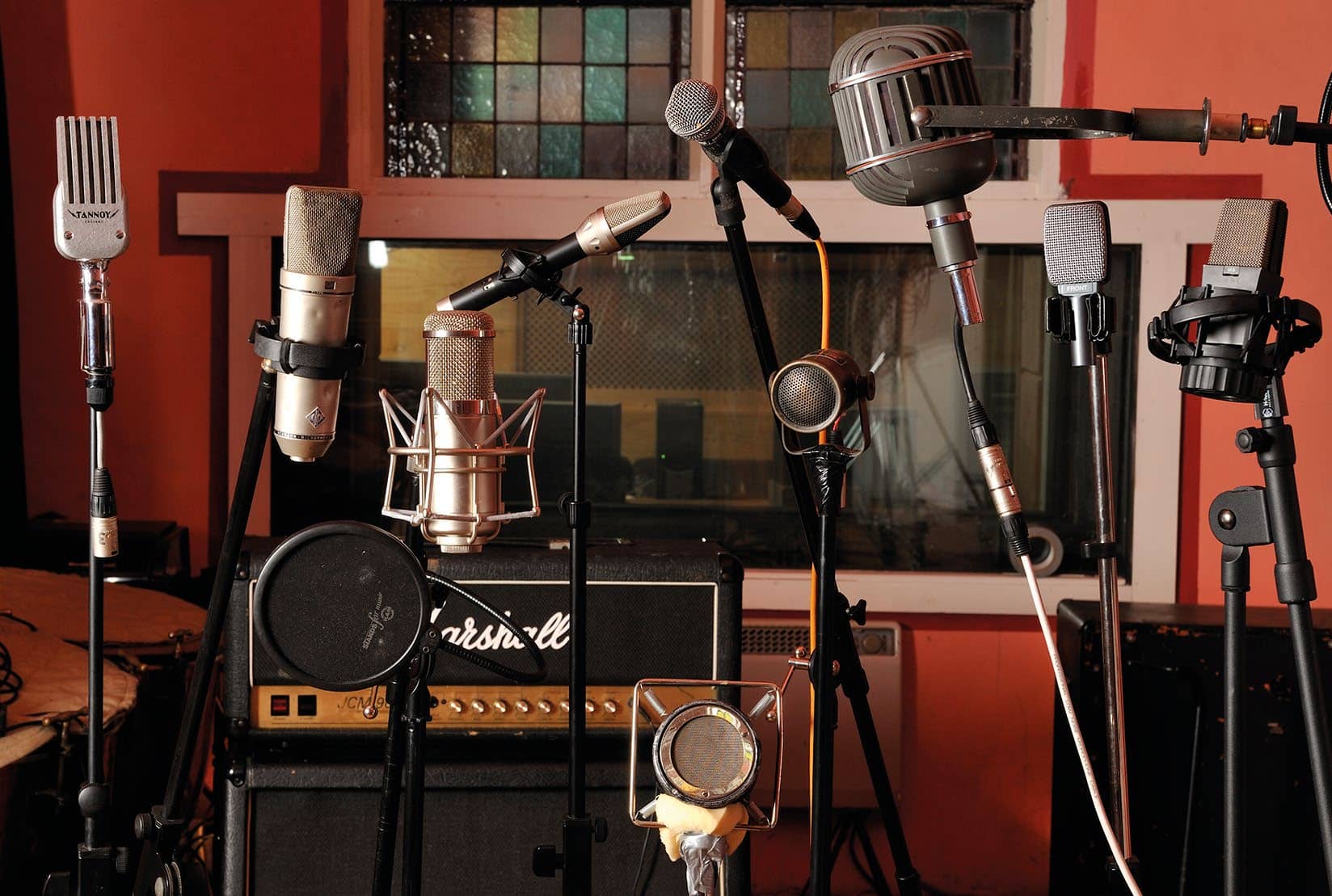 Recording drums can be a deep engineering experience (if you’re lucky enough to have access to a studio, a drummer and a rich collection of mics and preamps). Below, we’re using a multitrack recording session from Kore Studios. The mics are as follows: AKG D112 (Kick In), Neumann U47 (Kick Out), Sontronics STC1 (Kit LoFi), DPA (Kit Corridor), Melodium (Kit Mono), Altec (Kit Mono), Neumann U67s (Overheads Left and Right), Coles (Overhead Mono), Melodium (Stereo Room), AEA R88 Ribbon (Stereo Room 2), AKG C451 (Snare Top) SM57 x2 (Snare Top 2 and Bottom), Sennheiser 421 (Rack Toms 1 and 2) and RE20 (Floor Tom). Each mic (mono or stereo) is added to its own audio track and, where necessary, we pan each mic in the stereo field. This is true for the overheads and toms channels. 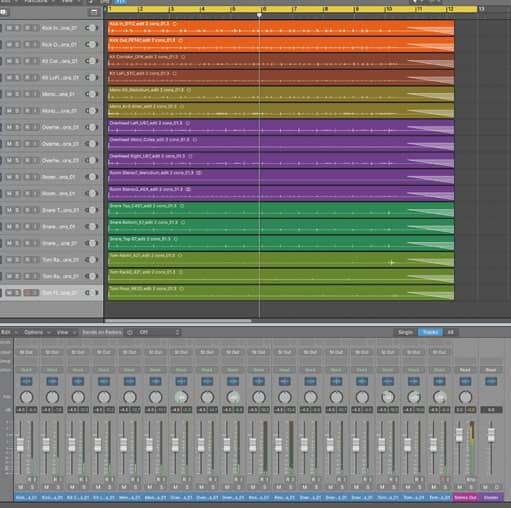 > Each mic gets its own audio track and panning is adjusted for tracks which need it. Here’s the sound of the raw drum recording without extra processing. This combines close, ‘spot’ mics for each drum and more ambient ones (overheads and room mics). 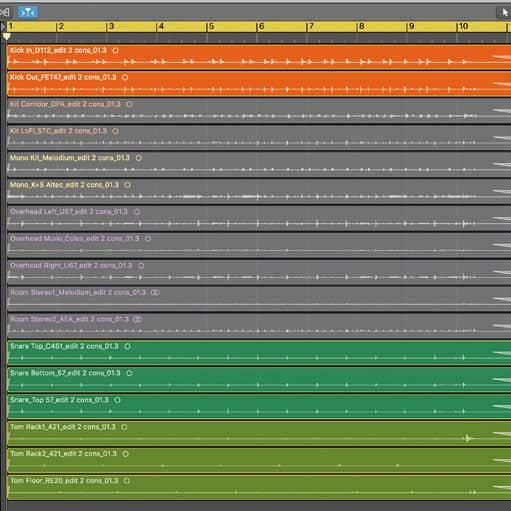 > Here is the sound of only the close mics. See the detail provided, with a focused sound. While there’s unavoidable spill in each channel from neighbouring mics, it would certainly be possible to make focused, individual effects (EQ, dynamics) choices per channel here. 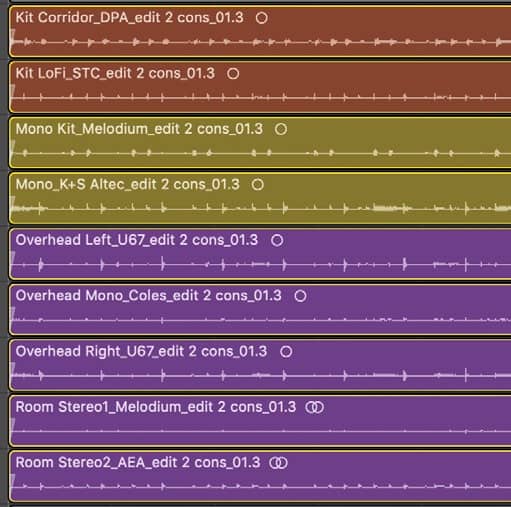