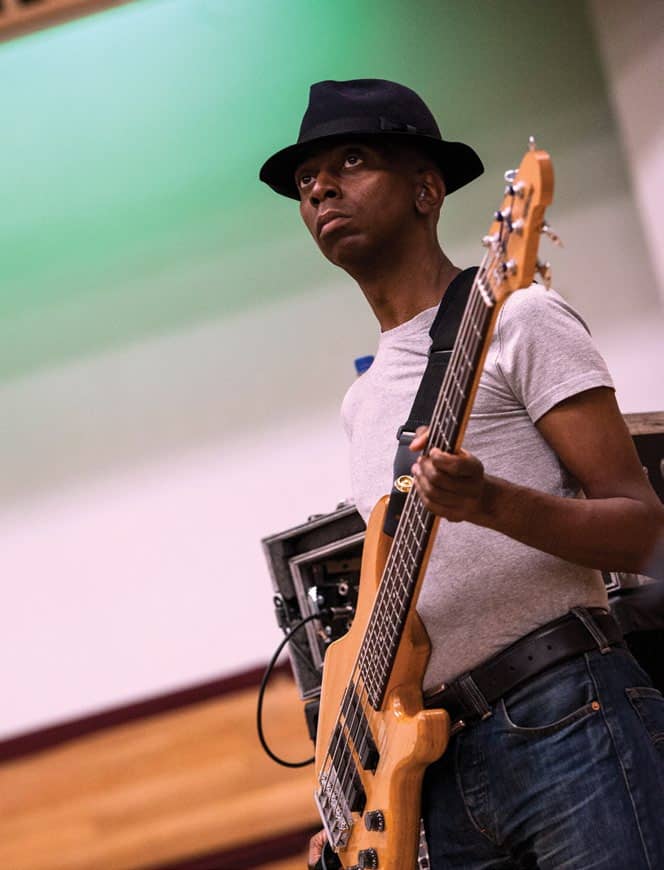 Most successful bassists learn to read music and then build a career, but not the esteemed Michael Mondesir. He’s played with a huge list of musicians, from Jeff Beck, to Ginger Baker, Neneh Cherry, and Bill Bruford. All bassists should read this!

What does a day in your life at the moment look like, Michael?

Well, currently the thing seems to be playing in West End theaters, covering for the principal players. I’m not a chair holder, as it were. I just come in and dep for some lovely people. I finished a decade of fairly heavy touring last year. It began with the Thriller Live tour in 2009, and it was traveling around Europe, but then it spread to places like China, and Israel, and Egypt. That was very last-minute—I had the call two nights previously. I said to them that I couldn’t read music, but I could learn, and if they sent the audio, then I’d be all right in a couple of nights.

You never learned to read music as a kid?

I came up just learning in my room, just hearing records, and going to concerts and looking at the hands of players. I remembered what they played, and then headed home and played the things at home, even though I didn’t have a bass. I’d just mime the hand movements.

Visualizing it rather than actually doing it?

Entirely, yes. I did that for probably two years before I even actually touched a bass. By the time I actually held one, it was like ‘Oh, I was right’. My family had no money, and when you’ve got no money, you get resourceful and find another way. I don’t think it’s super-unusual. It might be unusual to take it to a particular level if you like, but even so, there are plenty of players that I know who came at it in that kind of way.

So why did you decide to learn to read in 2009, when you were already a sought-after bassist?

I was at a point where I’d had enough of not reading music, and I thought, ‘This is an opportunity to try to cure that problem’. I was really annoyed about the fact that I couldn’t actually look at a piece of paper and go, ‘This is where this happens’. I’d seen people do that for years and years.

Not being able to read had obviously not hindered your career before that point.

A lot of players who were aware of me in the early to mid-1980s, and who knew the kind of things that I was playing, were surprised that I could hear things and learn them quickly, and more importantly, remember them. That’s my superpower, I suppose.

Your brother Mark is an acclaimed drummer. Was he already a drummer by the time you picked up the bass?