Equipment And Weapons For Urban Warfare 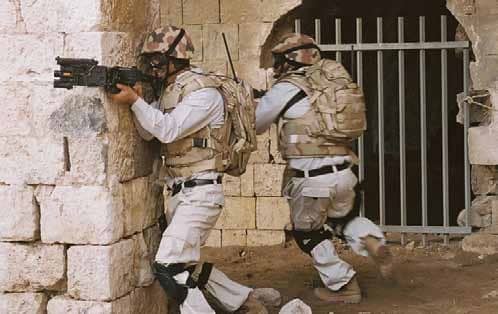 Combat in urban areas can be the most destructive due to densely populated terrain, military weapons not suitable for urban warfare, close quarter battle (CQB), hand to hand combat and ruthless behaviour of nonstate forces who do not believe in rules of engagement

EARLIER BATTLES WERE FOUGHT in open terrain but since World War II, urban warfare (UW) has become increasingly dominant and decisive. The reasons for this are many like a weak defender’s attempts at overcoming the asymmetric advantage of a more powerful opponent, insurgency (revolution) and shift of population from rural to urban area. Combat in urban areas can be the most destructive due to densely populated terrain, all military weapons not suitable for UW, close quarter battle (CQB), hand to hand combat and ruthless behaviour of non state forces who do not believe in rules of engagement. A quote from Vietnam War indicates the nature of urban warfare, “it became necessary to destroy the town to save it.” In the Iraq and Afghanistan war many towns held by ruthless terrorist organisations had to be destroyed to save the innocent population from further harm. Urban fighting increases the attrition rates on people and equipment through enemy action, environmental wear and tear and non-battle injuries. It includes looting, civil disturbances, insurgences, and other levels of conflict where military forces may be sent to conduct stability operations, such as counterterrorism, counterinsurgencies and peacekeeping.

The US census defines an individual urban area as one with 50,000 or more residents but this will differ from country to country. No one city is the same and so will be the tactics required to be followed. Similarly equipment may also differ depending on the type of terrain, opposition and population. Sometimes dictators like Hitler cause genocide and urbicide while taking control of cities. Aleppo in Syria and Mosul in Iraq are two examples of urbicide in modern times. Mosul, the second largest city in Iraq, was reduced to rubble during the nine-month battle to reclaim it.

Physical impact of the urban environment.

Impacts of war on the environment and people.

Criticality and challenge of sustainment and resilience by leaders.

Complexity of UW when multiple actors are involved.

Aggressor is always at a disadvantage.

Extremely destructive and rudimentary type of operations as seen in Raqqa, Aleppo, Marawi, and Mosul in the Middle East. Stalingrad (now Volgograd) was the largest and longest UW confrontation between Germany and Russia during World War II from August 23, 1942- February 2, 1943 (164 days).

Mastering the fundamentals of entering and clearing rooms and buildings.

US experience is that 90 per cent of urban targets are engaged at a distance of only 50 yards (about 45 m) or in narrow areas.