Defeat The Night With Image Intensifiers 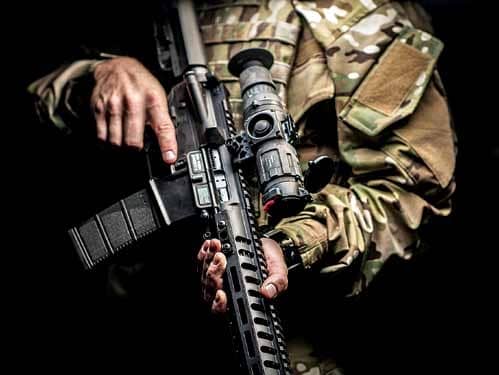 Sensor fusion combines image intensifier and thermal imaging technologies into one device. Such a combination enables a user to view the image in much greater part of the light spectrum which spans from visible to near-infrared to long-wave infrared and to see the image in the visible and thermal spectrum.www.spslandforces.com
Lt General Naresh Chand (Retd)

Image Intensifiers were primarily developed for night time viewing and surveillance under moonlight or starlight conditions. They are capable of detecting and amplifying low-light level images to appear as contrast sharp images. Over a period of time, image intensifiers have started covering a wide range of applications to include military, industrial products, inspection and scientific research, especially when combined with charge-coupled device (CCD) or Intensified CCD (ICCD) cameras.

The science and technology behind image intensifiers

In a typical image intensifier there are three components and processes which include a photocathode which converts light into photoelectrons, a microchannel plate (MCP) that multiplies electrons, and a phosphor screen that reconverts electrons into light. These are arranged in an vacuum tube.

Photocathode material. A variety of photocathodes materials are currently in use. Of these, photocathodes made of semiconductor crystals such as Gallium Arsenide (GaAs) and GsAs Phosphide (GsAsP) are called “third generation”. These photocathodes offer extremely high sensitivity.

Conversion into photoelectrons. The number of photoelectrons emitted at the first stage is directly proportional to the intensity of the input light. These electrons are then accelerated by a voltage applied between the photocathode and the MCP surface and thereby enter individual channels of the MCP. As each channel of the MCP operates as an independent electron multiplier, the input electrons striking on the channel wall produce secondary electrons. This process is repeated several times by the potential gradient (a potential gradient is the local rate of change of the potential with respect to displacement i.e. gradient) across the both ends of the MCP and a large number of electrons are in this way released from the output end of the MCP. The electrons multiplied by the MCP are further accelerated by the voltage between the MCP output surface (MCP-out) and the phosphor screen, and strike the photocathode which emits light according to the amount of electrons. Through this process, an input optical image is intensified about 10,000 times (in the case of a single stage MCP) and appears as the output image on the phosphor screen. Additional MCPs will add to the amplification.