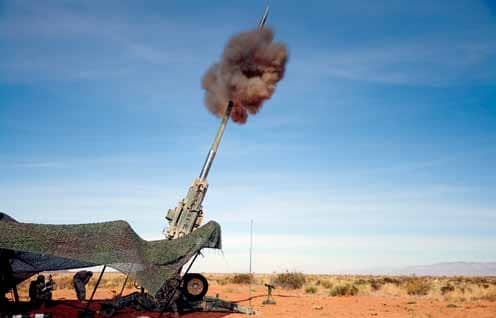 During 1850, solid shot, which was spherical in shape, and black powder were standard ammunition for guns. Howitzers fired hollow powder-filled shells which were ignited by wooden fuses filled with slow-burning powder.

A PGM (also called smart weapon, smart munition, smart bomb) is a guided munition designed to precisely hit a specific target. The terminal guidance unit is designed to sense emitted or reflected electromagnetic -radiation. PGMs is the area where artillery can improve radically to provide devastating, accurate and almost instant fire. PGMs could also punish infrastructure targets with less collateral damage; engage radars, integrated air defence systems, and command and control centres effectively. PGMs would be self guided and thus could be launched from a longer range when operating from an airborne platform thus reducing the risk to the pilot and the aircraft. PGMs used by US Forces have been successful in the Middle East, forcing the adversaries to change their tactics by widely dispersing their forces. PGM Components include a Guidance Unit which discriminates differences in energy received by its sensor; and a Tracker Unit which controls the flight of the PGM to the target.

Some examples of current PGMs

M982 Excalibur. This is a 155mm extended range guided artillery shell developed by Raytheon Missile Systems and BAE Systems AB. It is a GPS-guided munition, capable of being used for close support of within 75-150 m of friendly troops. It has a range of 40-57 km and CEP (cumulative error of probability) of around 5-20 m.

M712 Copperhead. This can be fired from a 155mm calibre gun, is fin-stabilised, terminally guidance by laser, explosive shell is designed to engage hard point targets such as tanks, self-propelled howitzers or other high-value targets. It can be fired from many types of 155mm calibre artillery guns like M777, M198, etc. The projectile has a minimum range of 3 km and a maximum range of 16 km. For Copperhead to function, the target must be illuminated with a laser designator. Once the laser signal is detected, the on-board guidance system will operate the steering vanes to manoeuvre the projectile to the target. Copperhead operates in two modes. Ballistic mode is used with good visibility and high cloud ceiling. Glide mode is used with low visibility and low cloud ceiling.