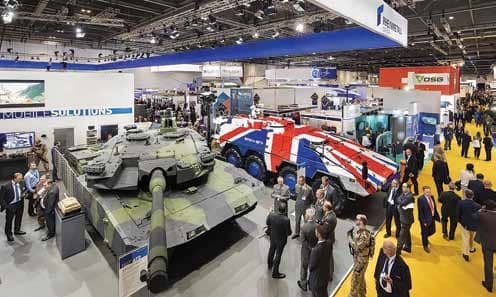 Out of six zones that make up the DSEI event, the Land Zone stood out with a vast array of innovative industrial advancements throughout the event.

One of the largest and most significant arms fair in the world wrapped a successful 20th year, held from September 10 to13, 2019, in London. This biennial event under the name of Defence & Security Equipment International (DSEI) is a principal event that brings together governments, national armed forces, industry leaders and the global defence and security supply chain on an unrivaled scale. DSEI comprises of five zones dedicated to different branches of the armed forces, named as the Aerospace Zone, the Land Zone, the Naval Zone, the Security Zone, and the Innovation Zone featuring the innovations of the entire defense and security community.

Being the largest zone at DSEI, the Land Zone features the latest in vehicles, weapons, ammunition, and equipment. This year DSEI witnessed first-hand display of some of the most recent developments and innovations from exhibitors from around the world through conferences, displays, announcements and exhibition.

Being one of the largest arms fair, it is no surprise that some of the major and most significant announcements of the arms companies (both big and small) are witnessed at DSEI. A few of them from this year’s DSEI include: l At DSEI, the Anti-UAV Defence System (AUDS) consortium revealed a revamped version of its counter-UAS (C-UAS) which has been designed to support mobility requirements in the land domain. The consortium, which includes Enterprise Control Systems (ECS); Blighter Surveillance; and Chess Dynamics, has designed a lower profile AUDS solution, called the Modular Integrated Pod System (MIPS), allows endusers to ‘rapidly configure the system for intended missions including mobile force protection; mobile short-range air defence; long-range surveillance; or ground-based air defence’.

Four new small-caliber ammunitions were showcased by FN Herstal (a leading firearms manufacturer) to address new threats faced by militaries as well as recent trends like environmental regulations. The FN ARIA .50 RR rounds are designed as reduced range cartridges, intended for ranges below 3.5 km. The cartridges do not require re-zeroing or converted weapons, and are intended to be used for training with .50 caliber weapons.