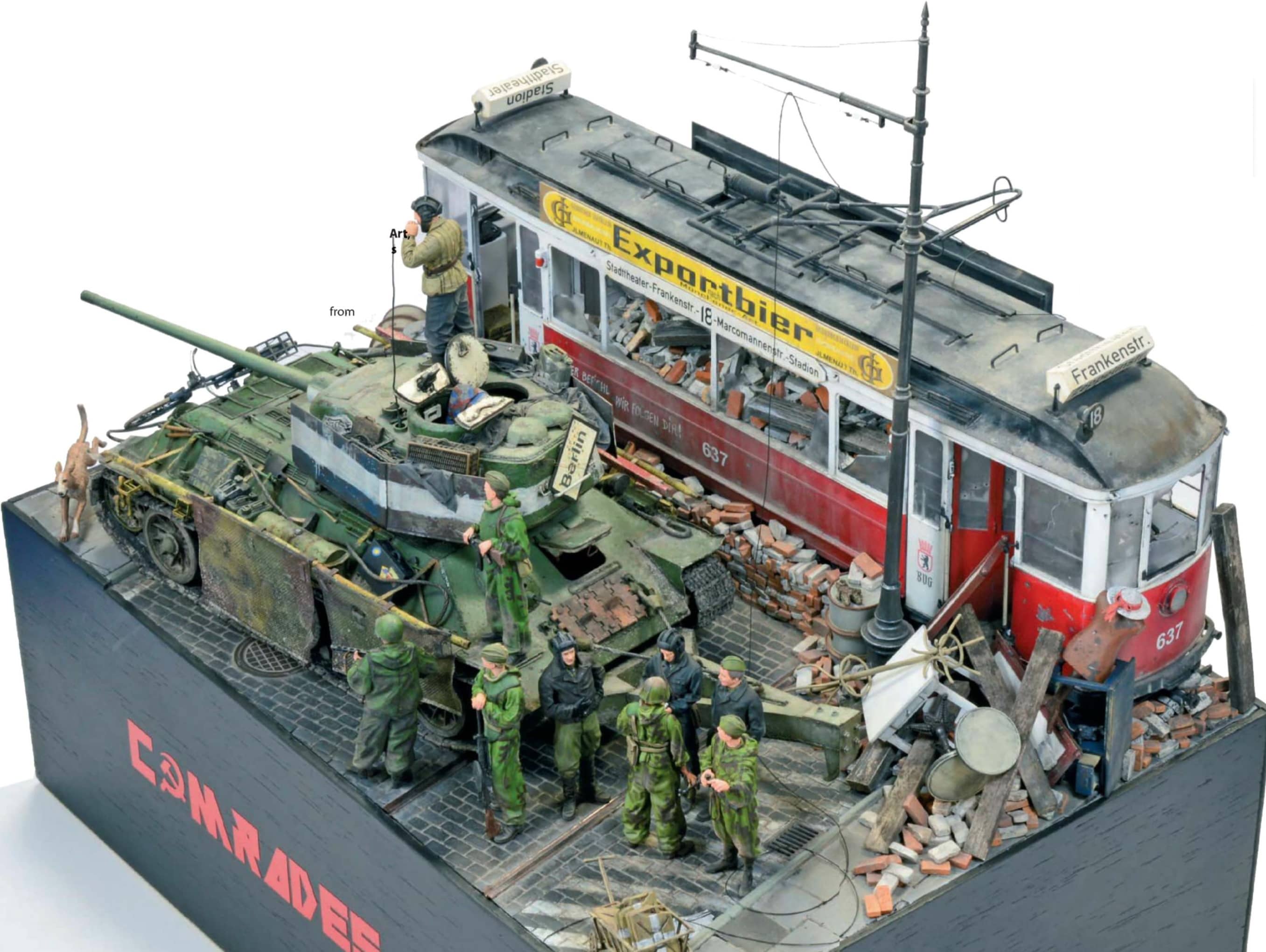 The starting point for this project was Italeri’s 2018 release of a ‘World of Tanks’ T-34/85. Rather than treating this as an out-of-the-box build, I decided to add further elements to give it a unique appearance. Having marvelled at Adam Wilder’s creation, which involved adding ‘Thoma’ Schürzen panels to his T-34 model, I was keen to follow suit (not that I wished to copy his work, but this would be an inspiration for my piece). I also planned to add spaced armour panels to the turret, a feature I had come across in various reference photographs.

Although the kit is adequately detailed, I opted to make further improvements by way of a set of metal tracks from MasterClub (ref. MTL35023), and replacement towing cables from Eureka XXL. The plastic fenders would also be replaced by etched brass versions from Aber. Although intended for the Tamiya kit, they fitted perfectly, and would offer the potential for representing battle damage and distortion. While perhaps seen as an unnecessary luxury, I invested in PanzerArt’s resin turret, complete with turned-metal gun barrel (ref. RE35-460); also from PanzerArt their set of resin road-wheels, which includes captured ‘Panther’ wheels (ref. RE35169). The fender-mounted toolboxes were from Bits Krieg (ref. BK-066), and a final addition, an incomplete mine-plough attachment, leftover from an old Zvezda kit.

Even at this early stage, I was considering how to present the completed model. The conclusion was that this should be on the streets of Berlin, and show signs of extensive combat. Luckily, PanzerArt had recently released some excellent tank crew figures, which could be combined with various items from Alpine Miniatures and Evolution Miniatures (conveniently lurking in my spares box).

Until now, my idea for the diorama setting had been no more than a section of road and pavement, with a few scattered cobblestones. Looking for further inspiration, I learned that the Berliners used street trams to form substantial barricades. Lo and behold, MiniArt produce a range of tram kits … one of these would be ideal for my scene. They also offer various diorama accessory sets including road sections, items of furniture, weapons and military equipment. In addition, I acquired a selection of resin pieces from Eureka XXL and PlusModel, together with red bricks from Landscapes in Detail (the grey bricks I made myself ).

Construction began with the tracks. MasterClub’s casting is excellent, and their choice of resin connectors is much better than some of the metal pins offered by other manufacturers. Not surprisingly, assembly was straightforward, the remaining links being put to one side to be added as spare tracks on the glacis.

The next task was to assemble the chassis. At this point, I decided to mix the wheel types: resin items from the PanzerArt set, one from an old MiniArt kit, and the remaining from the Italeri kit. This odd combination was quite common; T-34 crews were used to repairing their vehicles with different wheels, and the Soviet authorities even published instructions on how to fit captured Panther wheels to the tanks.