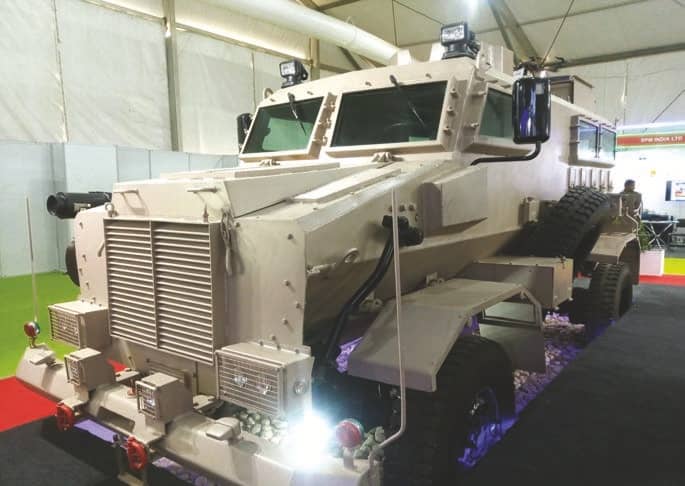 The revamped MPV is a superbly built world-class product and everyone is proud of it. It will prove to be a feather in the cap for all users. The cutting-edge vehicle is a symbol of India’s technological prowess in the third decade of 21st century, says DEVENDRA BHARDWAJ, Deputy General Manager, Ordnance Factory Medak in this interview with AMARTYA SINHA rounds. The vehicle can also be equipped with several weapons including a roof sensors like optical sensors and infrared sensors along with some radar sensors.

The newly launched MPV seems to be a brand-new product from the Ordnance Factory Board portfolio. How will it help the Indian Army and paramilitary forces?

Actually, this is a very rugged Mine Protected Vehicle (MPV). The platform is not brand new as it has already been in service since the last 10 years. These vehicles are very much useful for mobilising forces in the insurgency affected areas like Jammu & Kashmir, Jharkhand and Northeast. Maoists often plant mines and high-explosive charges beneath the roads and fire on moving troops during an ambush which puts the lives of soldiers at risk. Our revamped MPV can carry a total of 10 personnel in a 5+5 seating arrangement in any mission area. It is well protected from all sides from high energy explosions and high calibre bullets.

As far as the features of the vehicle are concerned (armouring, wheelbase, etc), how robust is it?

The MPV can withstand a blast of 10 kg of TNT from beneath. The armour is so strong that it can sustain explosions from 5-metres range. The armour plates easily withstand hits from 7.62 mm gunrounds. The vehicle can also be equipped with several weapons including a roof-mounted light/medium machine gun. The MMG port at the top can rotate 360 degrees thus giving the gunner total flexibility in shooting down enemy troops and terrorists. From mobility point of view, the MPV has a 220-horsepower diesel engine and a 4WD (four-wheel drive) system. Armed with a power steering and automatic transmission. The steering controls have the options of both left-hand drive and right-hand drive as per the user’s requirements.

Above all this, we have also developed a preventive threat analysis mechanism. We have started a concept design for the integration of a drone with the MPV. The drone will do the route surveillance and transmit all data to the MPV and control stations in realtime. So, the threat potential of the route to be taken by the MPV will be pre-empted beforehand. So, depending on the analysis, the commander and soldiers can decide which route they would like to follow. Everything will be based on Artificial Intelligence and Deep Learning models which we are building.