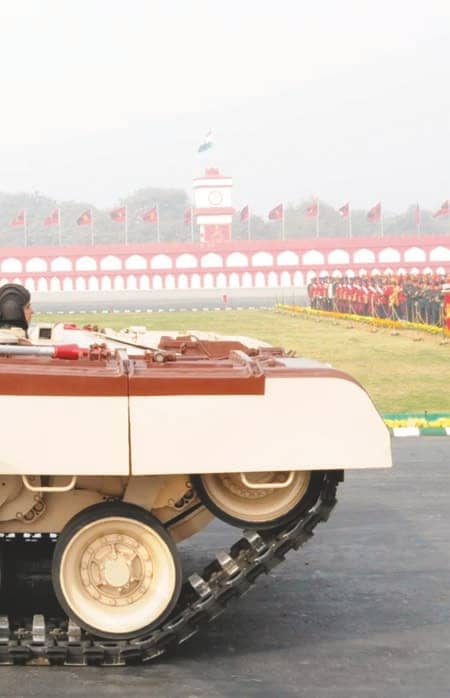 The two world wars in the last century witnessed widespread casualties among soldiers from both camps and forced many European nations to invest in better research and development initiatives to develop better armour and boosted-firepower in order to counter threats on the tactical-level battlefield. With the evolution of high-explosive warheads, improvised explosive devices (IEDs), landmines and grenades capable of taking out infantrymen and vehicles, shielding the soldiers and officers from enemy firepower became an abject necessity.

Tanks and armoured vehicles were developed to cater to the needs of professional armies all across the world to take out enemy positions and mobile targets through LRDLOS (Long Range Direct Line of Sight) firing and to protect the soldiers inside the hardened armoured compartment from hostile fire. While the evolution of India’s armoured fleet dates back to the 1950s, the country faced two massive ground wars with Pakistani 1965 and 1971 which witnessed widespread use of tanks, tank destroyer vehicles and armoured personnel carriers (APCs). As of 2020, with more than 4500 Main Battle Tanks (MBTs) divided into 67 armoured regiments, the Indian Army has one of the largest tank fleets in the world. But tracked-armour modernisation is a work in progress.

After the extraordinary performance of the Soviet-made T-55 tanks in the Bangladesh Liberation War of 1971, there was a rising chorus within the Indian military establishment for acquiring of a far superior and sturdy platform for future battles. By the late 1970s, Indian Army Headquarters also decided to acquire new-generation replacements for its British-origin fleet of Royal Ordnance Factories-built Centurion and Vijayanta tanks, which were based on the licenced production of the Vickers MBT, and consequently, paper evaluations concerning the firepower and mobility characteristics of the two principal contenders being offered for full in-country production- the AMX- 40 developed by GIAT Industries of France and the Chieftain-800 (which later evolved into the Challenger 1 from Royal Ordnance Factories (then owned by British Aerospace PLC) – were conducted by the Indian Army. Between these two contenders, the army had by the early 1980s zeroed in on the 43-tonne AMX-40 MBT, which was still on the drawing boards and was meant to be powered by a 1,100 horsepower Poyaud V12X 12-cylinder diesel engine coupled with a LSG-3000 automatic power shift transmission built by RENK Aktiengesellschaft of Germany (offering a power-to-weight ratio of 25.6 horsepower per tonne and armed with a 120 mm smoothbore cannon). However, AMX-40 had only marginal protection by battlefield standards of the 1980s.

After coming back to power, the then Prime Minister Indira Gandhi requested additional evaluation, including MBTs from the USSR, following which the Soviet Union's Ministry of Foreign Economic Relations made a formal offer to the Indian Ministry of Defence (MoD) to supply the 37-tonne T-72M Ob'yekt 172M-E4 MBT off-the-shelf, and according an approval for licensed production of the 41.5-tonne T-72M-1982 Ob'yekt 172M-E6 to the MoD-owned Heavy Vehicles Factory (HVF) at Avadi. By early 1981, two T-72Ms—powered by a 780-horsepower diesel engine, armed with 125mm 2A46M smoothbore gun and offering a power-to-weight ratio of 20 horsepower a tonne, were subjected to an exhaustive series of in-country firepower and mobility trials by the Indian Army. After review of trial results, T-72M and T-72-1982 (powered by a Model V-84MS four-stroke 12-cylinder multi-fuel engine developing 840 horsepower and offering a power-to-weight ratio of 18.8 horsepower/tonne) were selected as the Army's future MBTs, and a procurement contract for 2418 T-72s was subsequently inked, all of which are currently in service with the Indian Army.