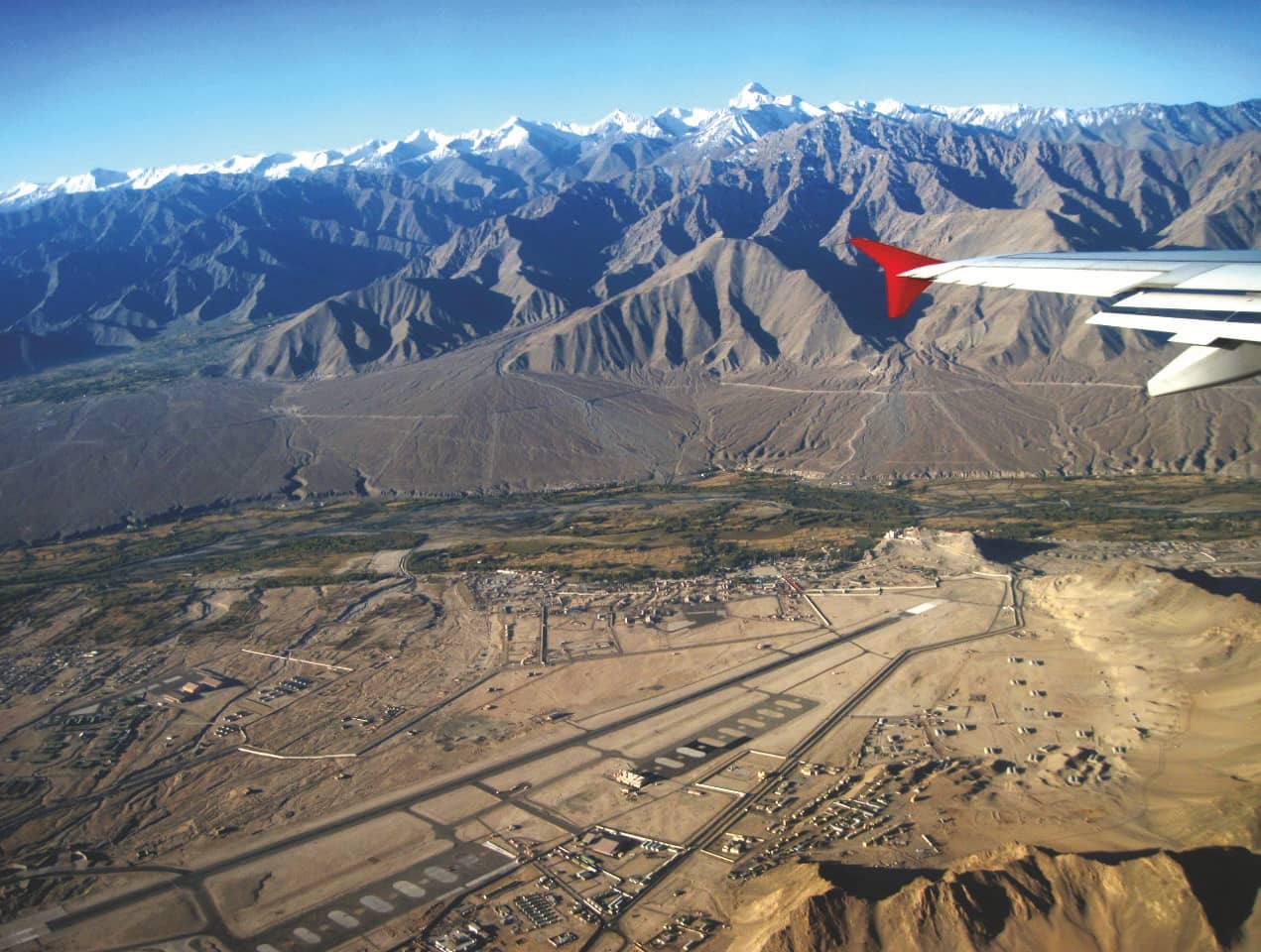 Explaining how China is systematically grabbing land in Ladakh by exploiting its topographical features, P STOBDAN suggests the way forward

P STOBDAN
Ever since India has changed the rules of the game in handling border post-2014, China's response has become different.

In the past decades, Chinese were used to India’s lax attitude. However, a shift in India under the BJP government has adopted a more “assertive posturing” to “interdict” Chinese troops came after 2014. This led to increased frequency of face-offs from once or twice a month to almost daily. Having been used to browbeat the Indian army in the past, the PLA is perhaps surprised by India's swift counter build-up and firmness at the commander’s flag meetings.

The current border stand-off in Eastern Ladakh has a long history though recurrently erupted to make news headlines. The issue has not been about clarity of the Line of Actual Control (LAC) along the long-disputed border but about China’s pervasive encroachment over a large tract of land that had remained under dispute since the 1960s. Not only did the Chinese troops frequently enter through land and air, but they also regularly entered through the water in boats along with vehicular patrols across the Pangong Lake.

New Delhi’s prolonged neglect of Ladakh and leaving the region under the administrative control of J&K was among the key factors that weakened Ladakh’s border defence. New Delhi outsourcing it to Kashmir and Srinagar being too preoccupied with its own mess for decades meant that the protection of Ladakh land suffered.

While the past governments also cared less about the defence and building infrastructure of the area the vacuum was exploited by China and Beijing found it easy to grab Ladakh land through multitudes of tactics. 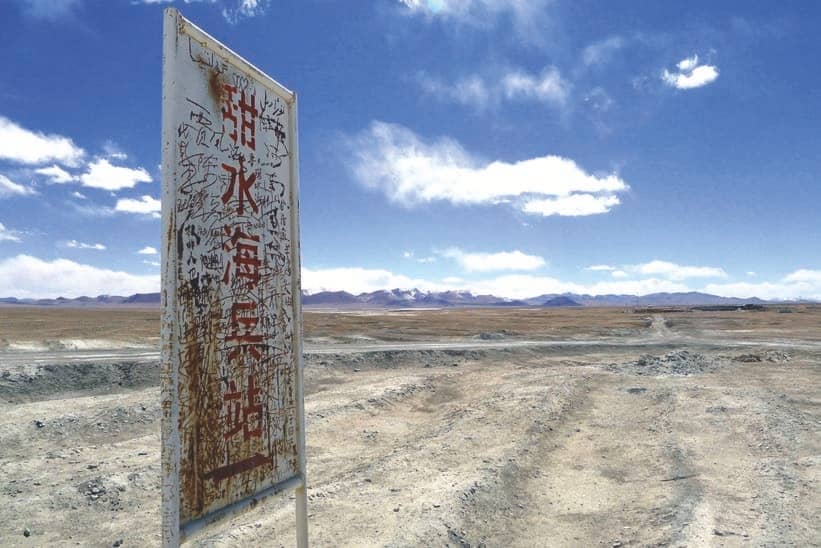 A report of the Jammu and Kashmir government that was highlighted by the media in September, 2009 suggested that the Chinese have been grabbing Indian, especially in Skakjung area of Eastern Ladakh in ‘inches and not in yards’. Even after losing Aksai-Chin (East of Chang-Chenmo) and Menser villages in the 1950s and 60s, Chinese have been occupying further land in Eastern Ladakh. A careful survey on the ground also indicated that nothing drastic changes had been made by J&K authorities to defend its territory even after 1962 as the Chinese have never stopped encroaching into the pastureland traditionally grazed by the Chang-pas (shepherds) in Ladakh.

Although most of the 846 kilometres border in Ladakh is disputed, the section most critical has been the area between Dumtsele and Demchok – a distance of over 45 kilometres. The area is locally known as Skakjung located 300 kilometres east of Leh and is traditionally the only winter pasture for several villages including Chushul, Tsaga, Niddar, Nyoma, Mud, Dungti, Kuyul, Loma etc. This area is located on the right bank of Indus between Dungti and Fuktse but the area extends even up to Demchok.

Skakjung is lowland and a relatively warmer place compared to the high mountains surrounding it. Copiously available pastures here are kept untouched during the summer months so that they can be used for winter grazing by the shepherds. For centuries, the shepherds took their livestock to Skakjung between December and March every year. During this time, nomads prepare for the lambing process and young lambs become capable of walking. Skakjung also remains a source of collecting Tama firewood and cow dung for the Chang-pas. The area sustains 80,000 sheep/goats and 4,000 yak/ponies during winter. They consume over 75,000 quintals of tama or dry forage, worth ₹10 crore annually.

There is no exact demarcation of a boundary between India and China in Skakjung but there exists enough documentary evidence that Skakjung (measuring at least 9 × 40 kilometers) had historically fallen into the control of Ladakh kingdom.

In the contemporary times, Chinese advancement in Skakjung had intensified after 1986 when Deng Xiaoping pursued a forward economic policy for large-scale infrastructural development in the Ngari area of Tibet, facing Ladakh. In the absence of reliable information, the exact Chinese advancement cannot be ascertained; however, few correspondences that were dispatched in 1993 by the Deputy Commissioner to the Jammu and Kashmir Government in Srinagar had suggested that the Chinese pushed the herdsmen into the Indian side in Skakjung with large livestock numbering 8,000 to 10,000 illegally every year. Enraged by the Chinese aggressiveness, the Indian herdsmen, complained to the district authorities every year to push the Chinese herdsmen back across the LAC. 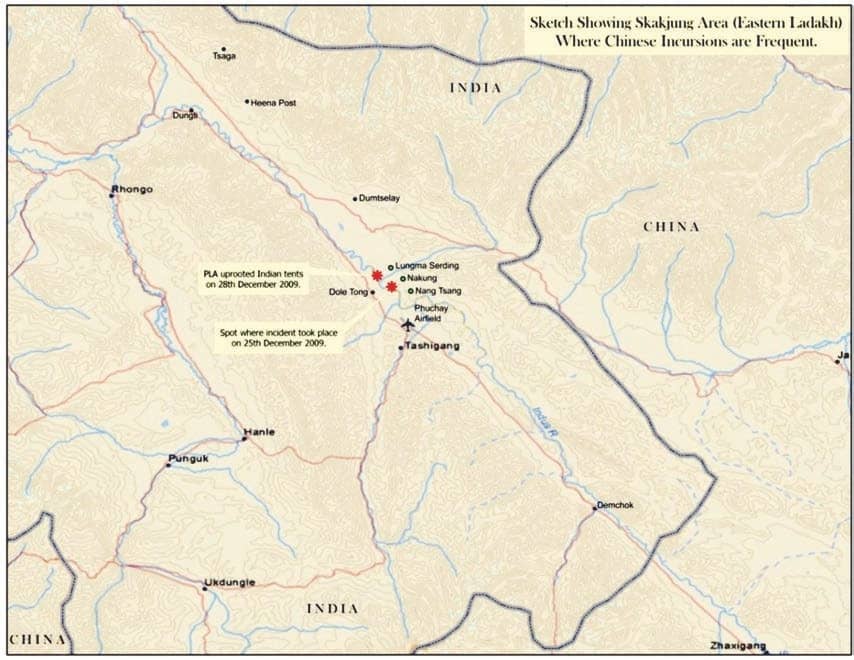