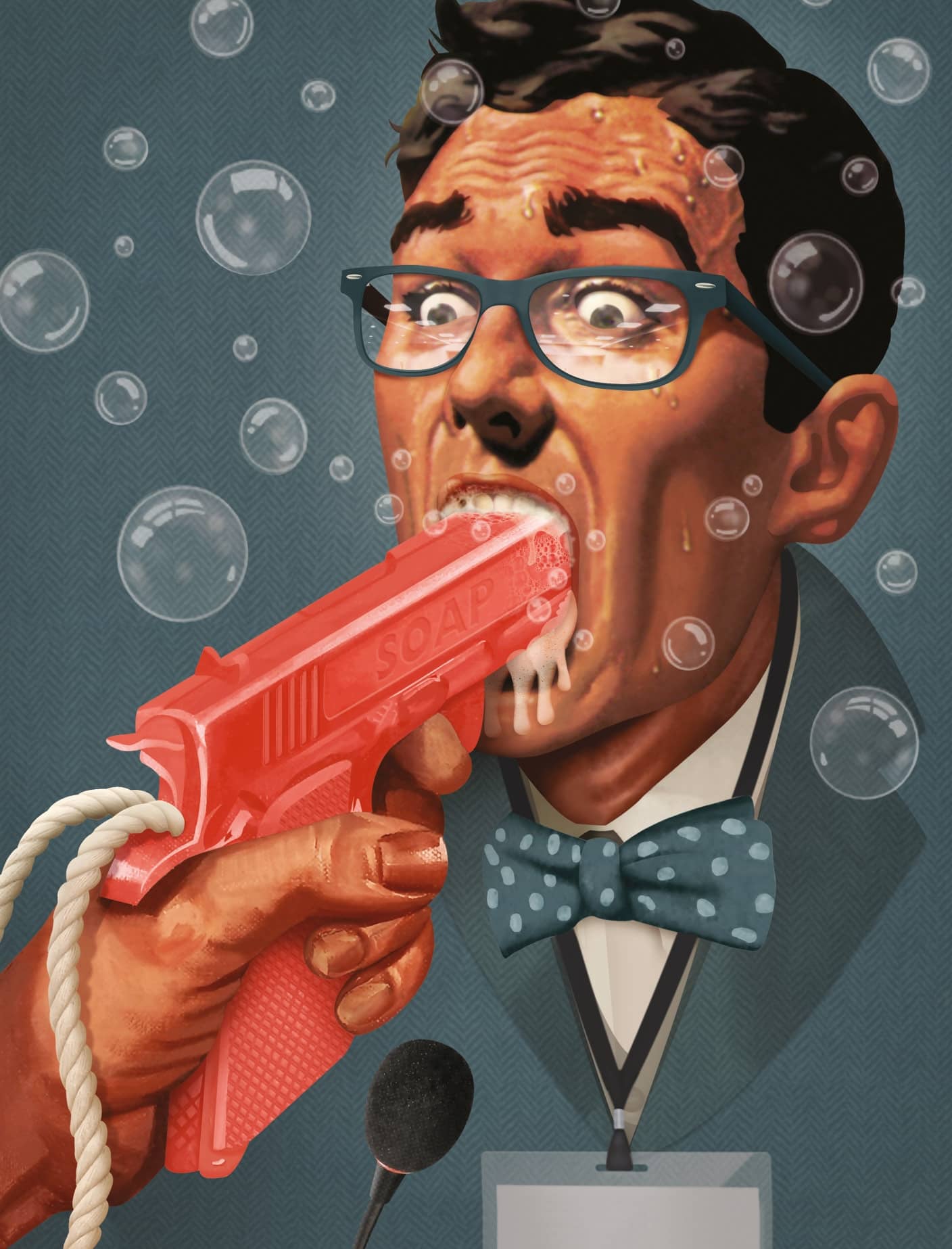 WAS THE PROFESSOR DYING OR MERELY EXPERIENCING A NEW KIND OF AMERICAN DISCOURSE?

When I was shot, I was not surprised. I’d been waiting so long to be shot. Several childhood nights I dreamt of being assassinated by the entire cast of a popular sitcom, or spent afternoons wondering which neighborhood boy could soon shoot me, and I was regularly visited by visions of the mayor or a news anchor or a row of armlinked Rockettes pursuing me with bullets, and several times I had nightmares that both my mother and my father, each of them, one after the other, shot me in the head. I have never touched a gun — I’m simply not that sort of person — so it has long been my American fate to meet the other end of a trigger. The right to bear arms carries the obligation to bear their burden.

Just before feeling no surprise in being shot, I was, however, briefly perplexed that this long-anticipated event had happened in a particularly dispiriting hotel conference room. The folding chairs and grim lighting simply set the wrong stage — it was somehow too ordinary of a location and yet not quite ordinary enough, not ordinary in the right way. The contrast of the image was set too low. The air felt pixelated. But then, holding my gut wound, I was overcome by how the blood pooling in my hands was as luxuriously temperate as the water of a perfectly calibrated bathroom faucet in a fine- dining establishment, and it was in that moment I fell to my knees, in awe or pain, as the room filled with screams and gun smoke and the smell of burnt flesh.

Hunched over the decorative carpet — a golden floral pattern interspersed with royal green fleurs-de-lis — I struggled to recall the history of the fleurs-de-lis, but all I could remember was the symbol meant one thing in one century, then meant its opposite in the next century, and now it carried both meanings or perhaps any meaning anyone wanted for it, or perhaps it had no meaning at all. True, European history was not exactly my field, but how horrible it was to see how poorly my own brain had held on to history. Hadn’t open necks sent blood rolling between Parisian cobblestones? The least I could do — yes, the very least anyone could do — was to remember.

The chintzy chandelier above me was being dismantled by gunfire, and fake plastic crystal rained on my back as I tried to mentally reassemble key dates of the French Revolution. Yet who can be counted upon to recall anything specific when bathing one’s hands in such luxuriously temperate fluid, the likes of which you’ll find only in the very best fine-dining establishments? We had assembled in that hotel conference room for the annual Conference on the State of Modern Thought, a four-day invitation-only symposium organized and attended by a cadre of multidisciplinary academics, and each night we dined at the finest restaurants in that year’s host city, and at the end of each decadent meal we put down our endowment-backed credit cards with a wanton satisfaction we each tried to wear casually.

More specifically, we had assembled in that hotel conference room for a much-anticipated session led by Harold Mennakin, an extremely charismatic but not entirely substantive philosopher of philosophy who was giving a lecture about how every theoretically monumental philosophical idea descended, paradoxically, from the minuscule subjective reality of one person’s meaningless life. The title of the talk was “No Great Man,” and I had gathered from the pamphlet’s description and from a cursory understanding of Mennakin’s work that he was making an ethical argument for a philosophical methodology that is self-negating and pluralistic, which interested me in theory but less, I realized, in actuality. Mennakin was in the midst of a clumsy metaphor about intellectual solipsism that involved a pressure cooker and dried beans when our assailant threw open the double doors, hoisted his guns without grace and began shooting.

To be honest, Mennakin had lost me with the bean metaphor — I hear he’s a staunch vegan and perhaps his ethical diet has come at the expense of his sense of aesthetics and though I do agree with him that it’s a tragedy we so often fail to see around the corner of ourselves, I was much relieved by the sudden interruption, a relief that lasted at least until I fell to the floor, where my wound issued its seductive warmth into my hands.