Man In His Domain The Reverend William J. Barber II 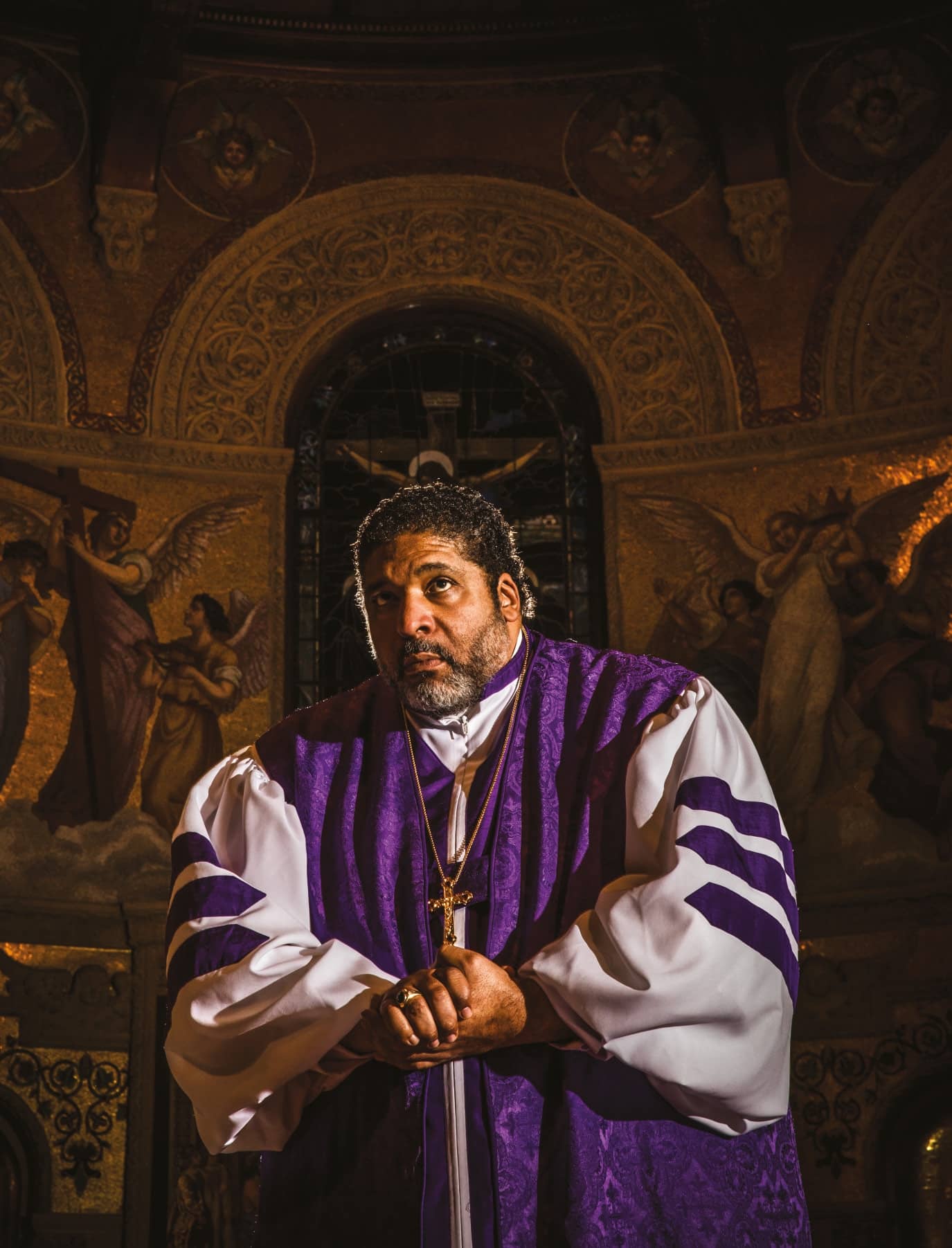 From His Pulpit in Goldsboro, North Carolina, This Progressive Preacher is Mustering an Army of Love— Comprising Saints, Sinners and Everyone in Between

The precise origin of Watch Night — a New Year’s Eve prayer service, common in Southern black churches, in which a congregation assembles to recall the moment the calendar flipped from 1862 to 1863 and Abraham Lincoln’s Emancipation Proclamation became law — is murky, but the sentiment involved is consonant with the season: Let us gather to celebrate the thrill of change and the promise of renewal.

This past December 31, at the Pullen Memorial Baptist Church in Raleigh, North Carolina, parishioners had filled most of the pews by 6:30 P.M. Latecomers jockeyed for standing room near the back. A banner stretching from one end of the balcony to the other read POOR PEOPLE'S CAMPAIGN: A NATIONAL CALL FOR MORAL REVIVAL. A camera crew snaked power cords up and down the pulpit stairs, preparing for a live internet broadcast. The crowd was a mix of regular churchgoers, graying activists and young couples in expensive eyeglasses. Buttons broadcasting liberal causes and catchphrases (LOVE TRUMPS HATE, BLACK LIVES MATTER, NASTY WOMAN) were abundant.

The night’s headliner was the minister and activist William J. Barber II — newly minted MacArthur Fellow, former president of the North Carolina chapter of the NAACP and co-chair of the revived Poor People’s Campaign, a movement conceived by Martin Luther King Jr. in 1967. Barber and I were scheduled to meet for a formal interview before the service, but his brother, Charles Barber, a minister in Georgia, had recently been diagnosed with inoperable pancreatic cancer, and earlier that day the situation had grown grim. One of his colleagues called to say that Barber needed to spend the day with family.

My breath caught as I put my phone back on the hotel nightstand. How could anyone, faced with that kind of news, address a sprawling congregation, let alone send it into a new year armed with hope?

Barber was born in 1963, in Indianapolis. Around his fifth birthday, his parents moved him from Indiana to a segregated kindergarten in Washington County, deep in North Carolina’s so-called black belt. His father had grown up there and wanted to help desegregate the state’s public school system. He became one of the first black teachers in the county; Barber’s mother was the school’s first black office manager. (She still works there: “The great- grandchildren of some people who called her nigger when we first came now call her Mama Barber,” Barber writes in his book, The Third Reconstruction.) On weekends, his father traveled around the state, holding revivals in one room churches. “He was sharing the gospel message that gave him hope, believing that it was good news for others as well,” Barber writes. “But at the same time he was also building connections as an organizer.”

The elder Barber’s decision to move his young family to the segregated South demonstrated his conviction that faith and activism are inextricable. “He believed that racism was against the imago Dei, the image of God in every person, and that systemic racism and poverty were forms of false worship, idol worship, the worship of self over the care for all humanity,” Barber tells me, speaking over the phone two weeks into the new year. “My parents could have stayed in the Midwest, but they chose to bring me to a segregated kindergarten. They came because a black principal asked them to come back home, and Daddy said that he accepted what he believed was a Macedonian call. In the Bible, the poor Christians said to Paul, ‘Come help us.’ And he did.”

Barber’s home base is the Greenleaf Christian Church in Goldsboro, about 55 miles southeast of Raleigh. If you listen to old sermons recorded on crackly 78 rpm discs in the 1920s and 1930s — preachers like the Reverend J.M. Gates of Atlanta hollering about how “death’s black train is coming”— you’ll recognize Barber’s heavy, undulating cadences, the repetition of key phrases, the call-and-response rhythms, the rich, intoxicating music of his voice. The North Carolina– based writer Benjamin Hedin, author of the 2015 book In Search of the Movement: The Struggle for Civil Rights Then and Now, contextualizes Barber’s rhetorical powers within the civil rights movement. “I think oratory is the proper tradition in which to place Barber, rather than activist or nonviolent apostle,” he tells me. “Barber’s place is to offer from the pulpit, where it has traditionally been offered, a source of hope and renewal and moral clarity. It actualizes all the hope and aspirations society by itself cannot.”