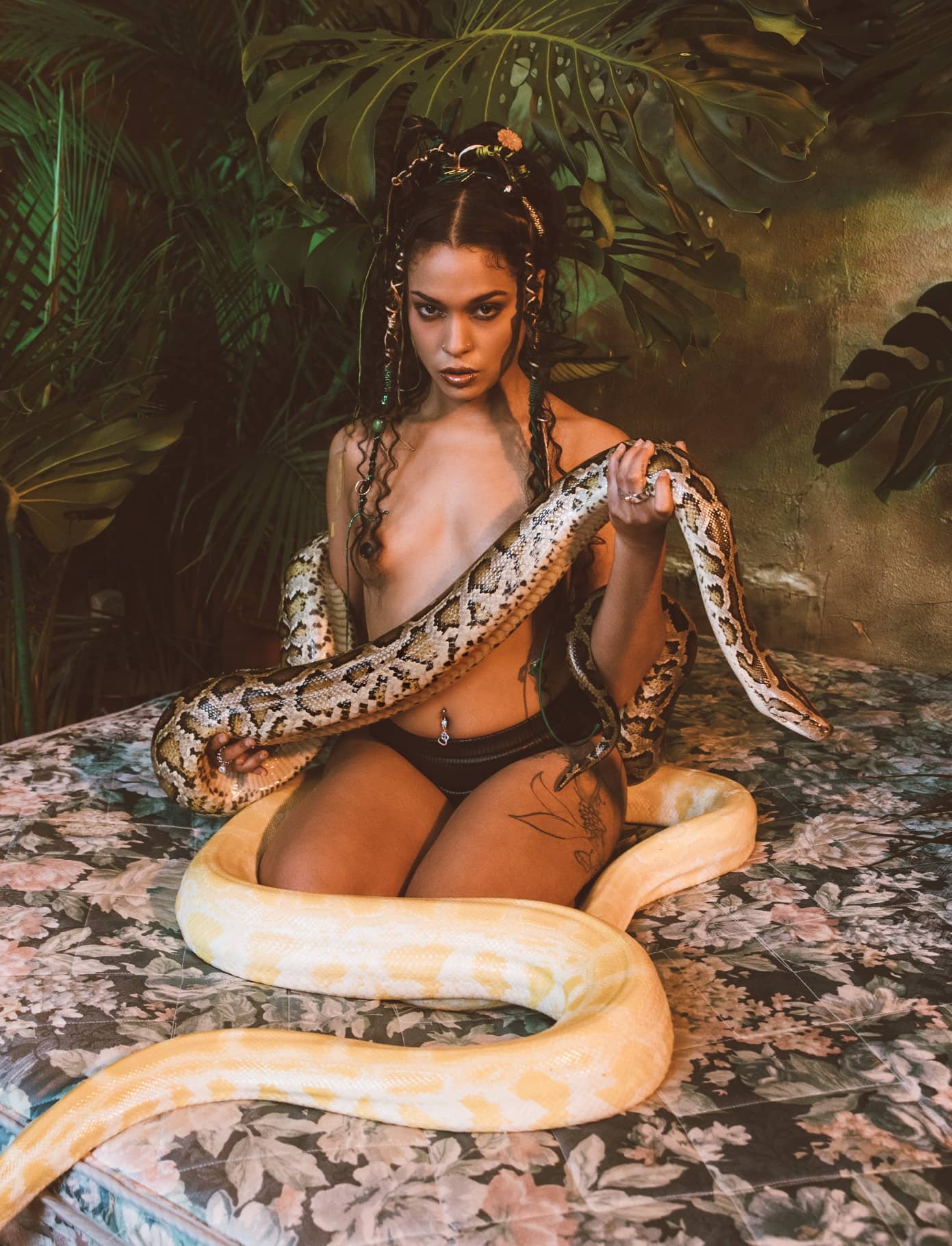 With a new album forthcoming, hip-hop powerhouse Princess Nokia explains why living in multiple dimensions is paramount to her existence on Earth

“Every day I feel different. Every day it’s either masc or femme or in between. Every day is goth or bohemian,” Princess Nokia tells me. “When I wake up and feel an energy, I coexist with it.”

The performer, born Destiny Frasqueri, is fluid in more ways than one. “I’m a gender-nonconforming androgynous person,” she says. “But some people are like, ‘What happened to your tomboy phase?’ ”

That question is a reference to Frasqueri’s breakthrough 2017 single “Tomboy,” off the album 1992 Deluxe. The song’s music video sees her on a basketball court in an oversized

T-shirt pulled over a sweatshirt. She later raps about her “little titties” and “phat belly.” Those who inquire about her lost era of tomboyishness seem not to realize that Frasqueri’s presentation will never be absolute and thus defies tidy categorization.

In a culture that encourages us to divide — by religion, economics, race, age, sexuality, the list never ends — the multihyphenate Princess Nokia persona sets out to represent the complexity of women, artists and human beings. She’s a lover and a fighter. She’s a rapper and a singer. She’s masculine and feminine. She’s a pragmatist and a dreamer. And no matter the haters, Frasqueri is unstoppable.

“It’s so much easier to understand artistic men,” Frasqueri remarks. “But women — especially brown women we think they have psychological issues.”

It’s a given that career-minded women have to work harder to earn respect and dollars. In hip-hop specifically, female up-and-comers often have a male sponsor. Lil Wayne ushered Nicki Minaj into the spotlight; Timbaland collaborated with Missy Elliott. Even with a co-signer, the unofficial rule is that urban female entertainers subject themselves to sexualization. Today, rising rappers such as Megan Thee Stallion, City Girls and Saweetie seemingly have to perform as vixen archetypes as well as perform flawless bars.

The number of female rappers signed to major labels has dropped precipitously since the late-1980s and early-1990s heyday, when more than 40 women had major deals at one time. In 2010, three did. To this day, only six female rappers have reached number one on the Billboard Hot 100. Those granted stardom are a reflection of mainstream values and ideals, which are often sexist and racist. But celebrity also offers a means of challenging those norms. By acknowledging these truths and refusing to be anybody but her authentic self, Frasqueri is causing a disruption.

“I love being proud of how studly I am, how boyish and how manly I can appear. I love being androgynous,” she says. “I feel beautiful like that. It’s just another beautiful side of me.”