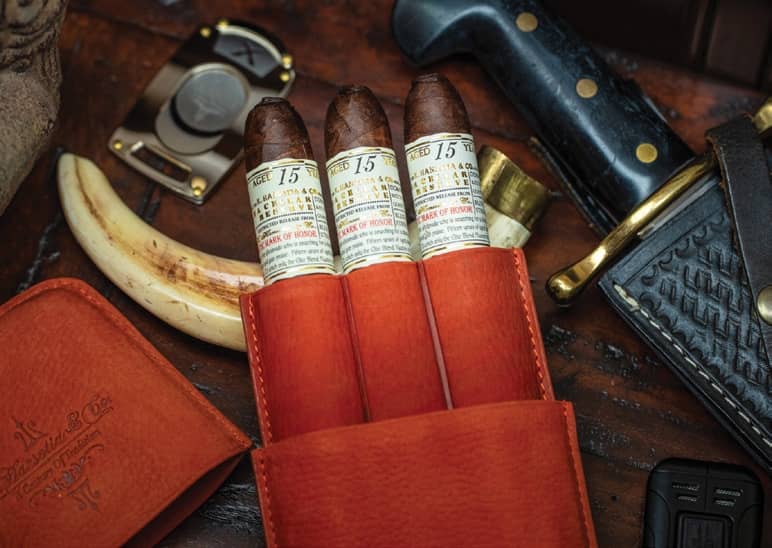 Ten great cigars and how to enjoy them in style

Cigars have of course been popular with Manhattan’s movers and shakers as well as connoisseurs of fine living in general for many years. So it may surprise you to learn that the city recently got its very first Cigar Sommelier, now in residence at the Soho Cigar Bar. This isn’t just a courtesy title or marketing ploy; Michael Dounoulis is now certified by the Tobacconist University, in Princeton, N.J. “Once I found out that I could be the first one in New York City, I needed to make sure I did it before anyone else,” as he told Crain’s New York Business.

The high-end smoking lounge, which celebrated its 20th anniversary this past January, offers more than 100 types of cigars, ranging from $17 to $60 each. “Dounoulis can tell customers how a particular cigar is made, where its tobacco comes from and the breakdown of its flavor notes,” as well as suggesting whiskey pairings, Crain’s reports. And business is booming; Soho’s cigar sales reportedly increased 28% last year with revenue up a reported 20% from 2017.

Selecting a fine cigar, with or without the help of a sommelier, is only half of the equation however. To enjoy them properly, you really must follow certain procedures, or the experience won’t come up to snuff. As dash ing menswear designer, Maxim Contributing Editor, and stogie enthusiast Duncan Quinn says, “Like many pleasures in life,” smoking a cigar is “escaping and making your heart race simultaneously,” kind of like base jumping but much more gentlemanly.

His favorite places to light up are Club Macanudo and Hudson Bar and Books in New York City, “but nothing beats a camp in the wild with a bottle of fine Scotch and good company” for a smoke-filled setting. And for added indulgence, he likes his cigars — preferably made by Montecristo, Macanudo, or Cohiba — dipped in Hampden Estate Overproof Rum.