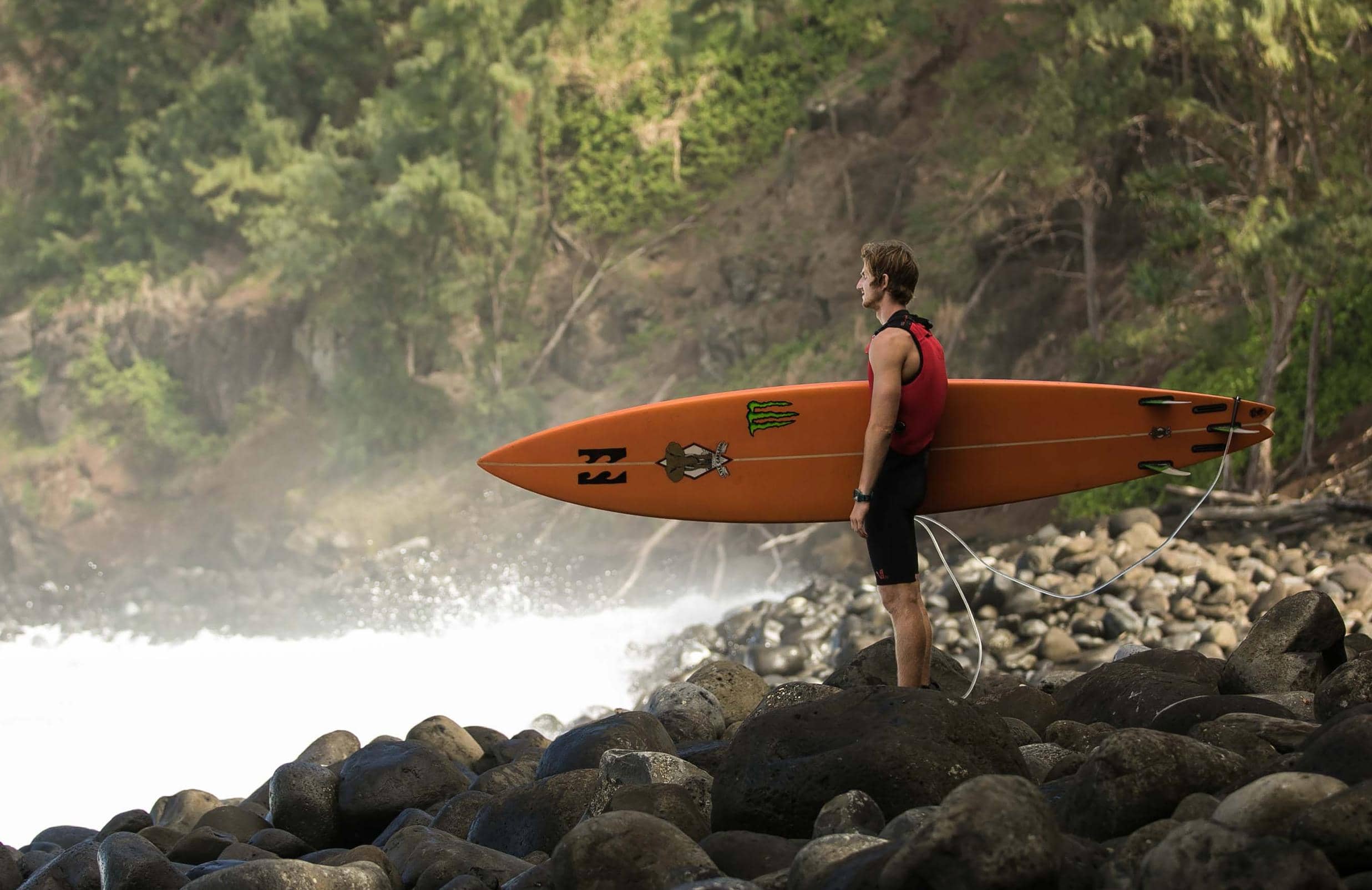 Matt Bromley’s movies; “Risky Business” and “Risky Ripples” testify to his unique ability to perform on huge and dangerous waves. Unforgettable footage shows him dancing on massive, rough, windy mountains of water with chop threatening to throw him off all the way down as he outruns the thunderous curl of monster waves.

Matt, who is also known as, “Bromdog,” has always been at home in the water. Before Matt could even swim, he was practicing his breath-hold, swimming around the bottom of the pool like a little tadpole. When the family moved to a beach house in Kommetjie, Cape Town, South Africa, he quickly abandoned other sports, and turned to competitive surfing.

Although he loved to compete, he lacked competitive fire, or at least his motivation was different. Competitions were all about high-performance surfing in smaller waves, whereas Matt loved the bigger stuff.

At around the age of 16, he really started to find his passion in serious waves of consequence.

He started responding to a higher calling - the wild freedom and beauty of big and extreme wave surfing; chasing the biggest swell systems around the world. 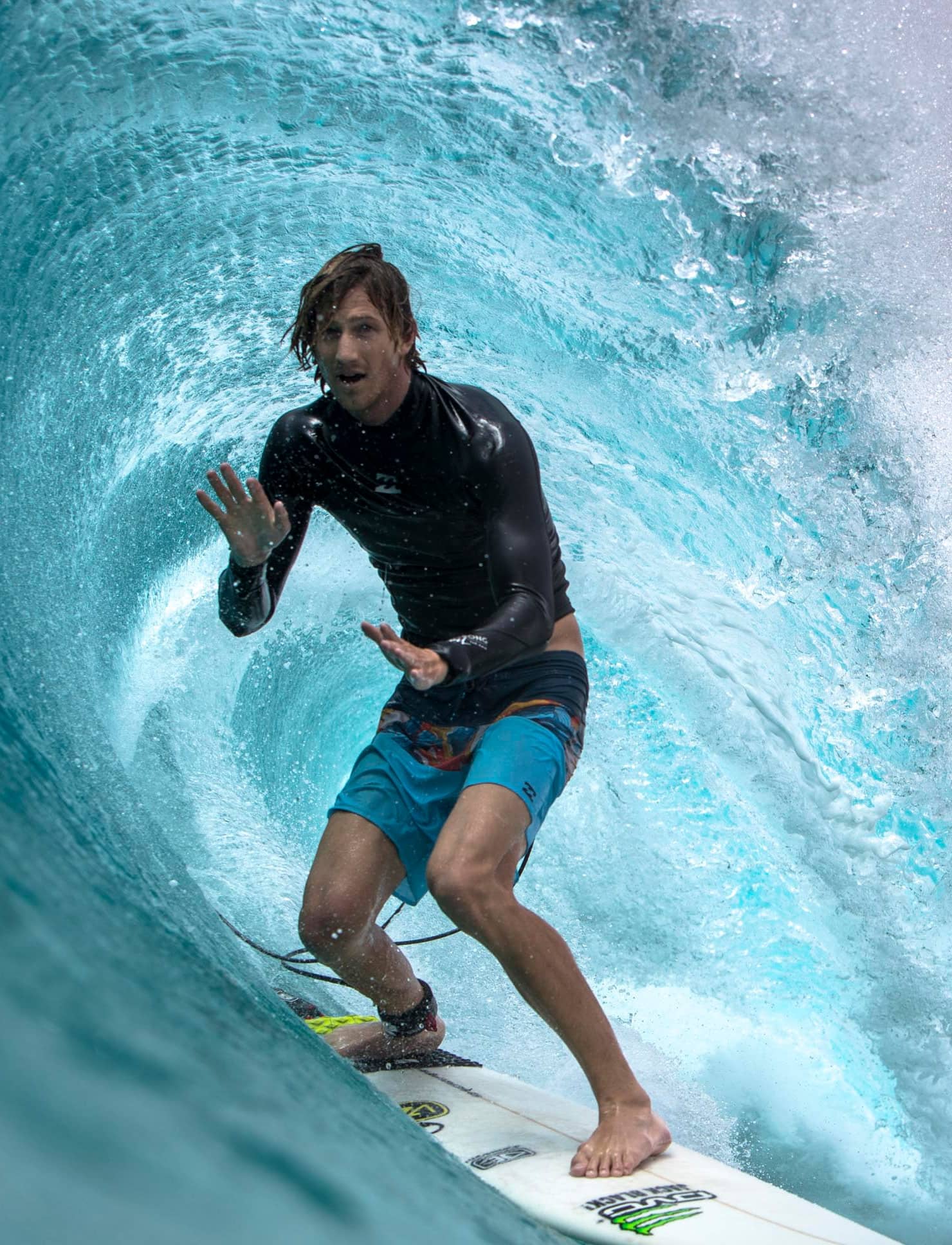 This new type of surfing required courage, split-second timing, wave judgment and understanding of the weather, ocean and tides, but most of all, it required the ability to constantly expose himself to situations beyond his comfort zone.

With Monster Energy and Billabong on board, he has created numerous world-class video clips and films, and has taken on many of the biggest waves on the planet.

Whether big tubes at Pipeline in Hawaii or windy, freezing storm surf at Mullaghmore, Ireland or padding into the biggest wave recorded in tropical Indonesia, or riding one of the top 10 biggest waves ever paddled at Jaws, the most notorious big wave in the world, Matt is passionate about the steepest waves of consequence.

Bromdog is recognized as one of the top exponents in the world of both big wave and “slab surfing.” In 2019 he featured on the list as an invitee for the Eddie Aikua Invitational in memory of the Hawaiian legend, at the famous Waimea Bay. The Eddie is the most prestigious surf event in the world with the coveted trophy being won by the likes of Kelly Slater, Bruce Irons and John John Florence.

All these accolades are cloaked by Matt’s humble demeanor and soft-spoken nature. You’d never know that behind his good manners and chilled-out attitude, is a gnarly man looking to slay some giant waves. 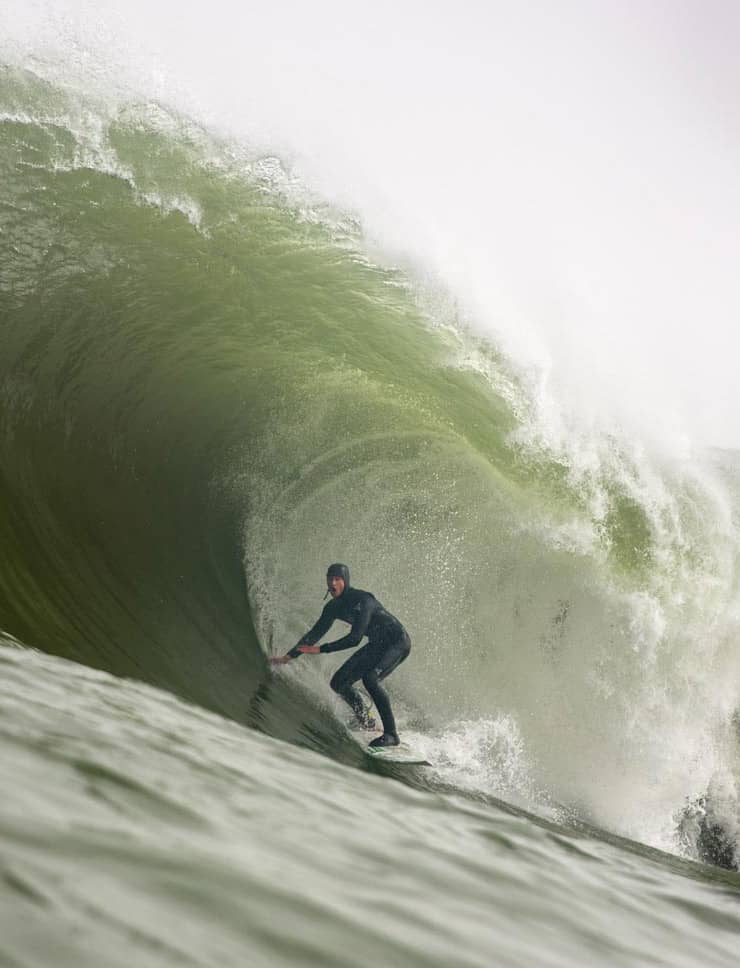 I was never really good at chasing the ladies, partially because I was always chasing swells. At the age of 17, I had my first proper initiation to big wave surfing, out at Dungeons, South Africa.

Everything about Dungeons is terrifying. The reef is just off Seal Island so you never know what’s swimming beneath you in the freezing cold waters, and then the takeoff area, where a wave can break, is the size of 2 football fields. The raw, shifting, unpredictable peaks, make it one of the most feared waves in the world. I borrowed a board that was 10ft long, which felt more like a boat than anything else, and a leash that was 15ft long, that felt more like a rope.

The day arrived and I caught the boat out around the beautiful Sentinel mountain peak, out into the deep where the wave breaks. Without any waiting around, or observing the lineup, I jumped straight in and paddled directly into the danger zone. 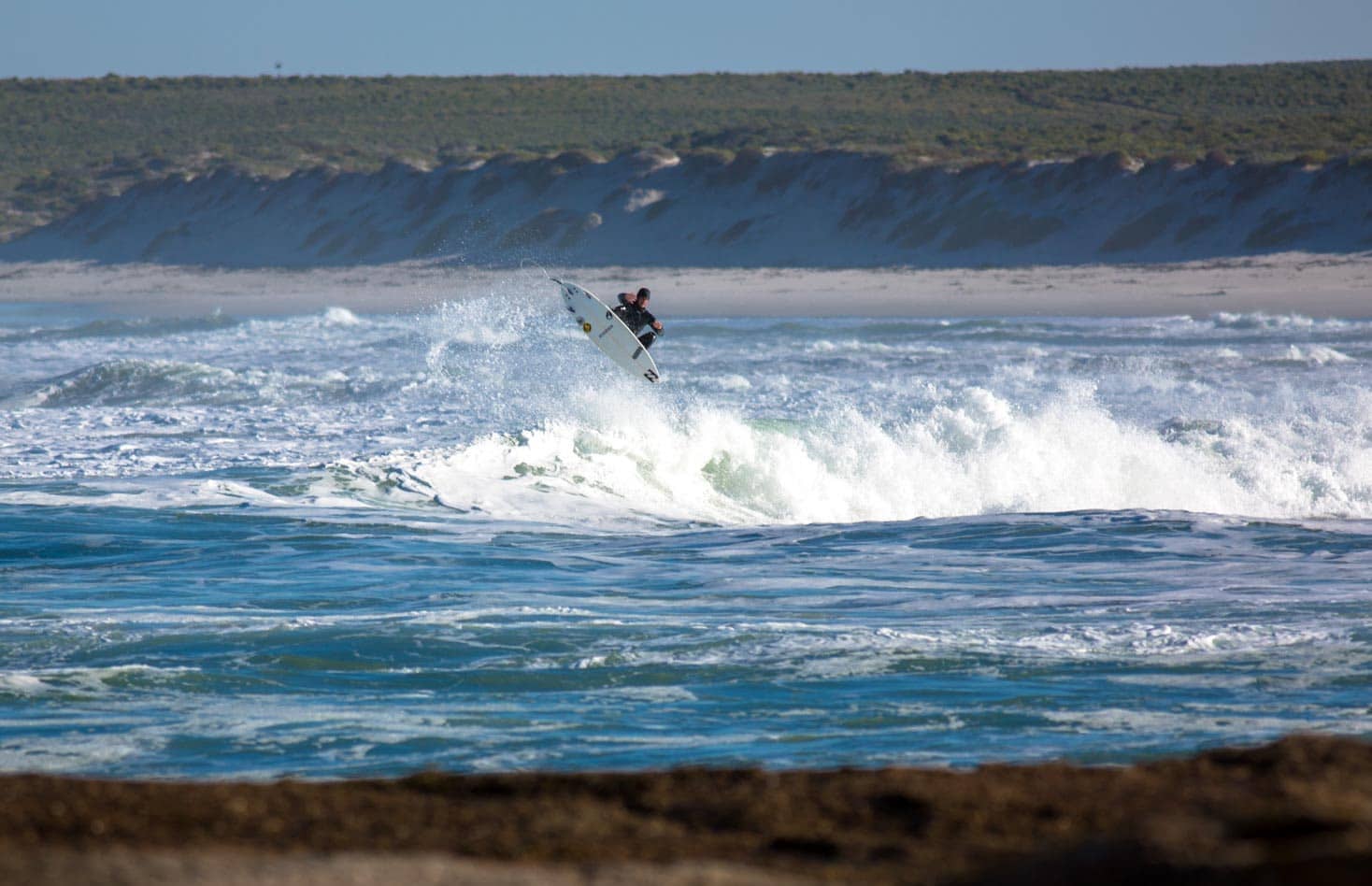 The horizon started to break, as a massive set of waves was approaching.

I had no idea what to expect, was I gonna be fine? Were the waves going to be breaking to the left or to the right? Further out or further in? On my head?

I was greeted by my worst nightmare; the biggest wall of water I’d ever seen, 30 feet high and towering over me, about to break on my head.

I tried to remain calm, but my adrenaline took over and my breath escalated rapidly. 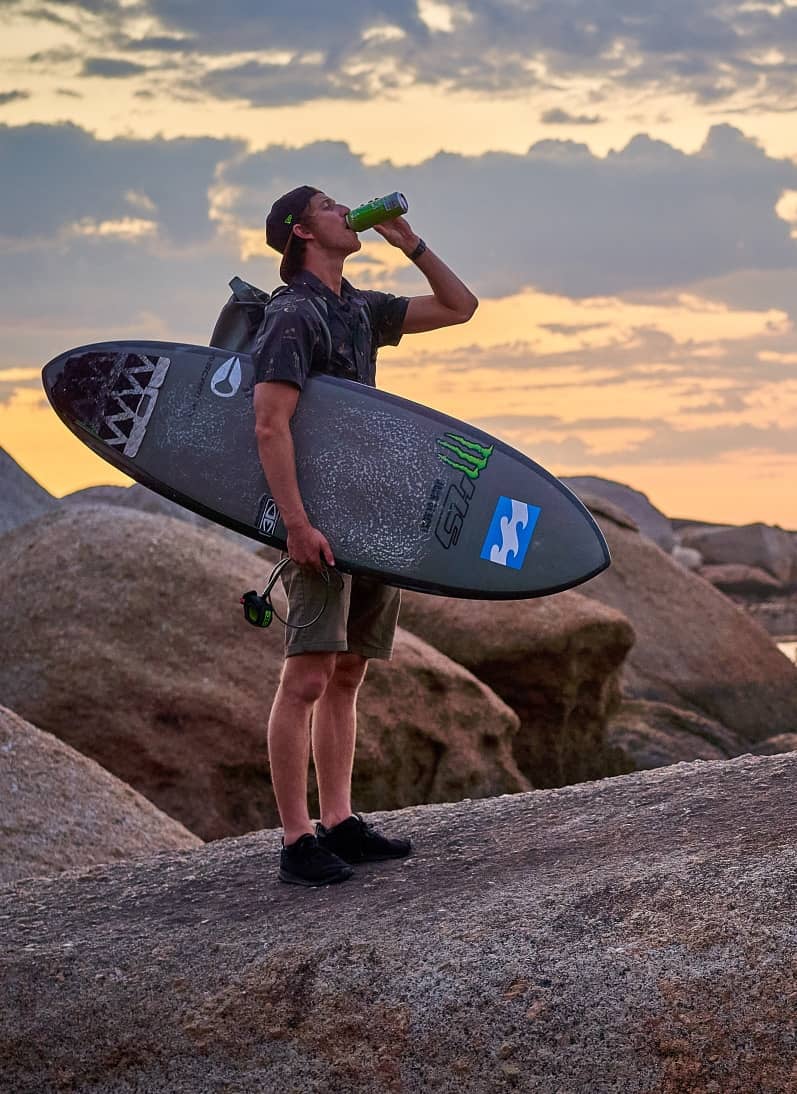 I dove through the wave and made it out the back, but my board started dragging me back in towards the rocks. While trying to re-gather my board, I turned around to see an even bigger wave behind me. Panic set in. I dove through the second one, popped through the back of the wave and there was a third, and again, my board pulled me back in closer to the danger zone. I went through another three monster waves, each time being pulled dangerously close to being sucked “over the waterfall” into the wipeout - where the wave would have pulled me into its full energy and held me deep under the water.