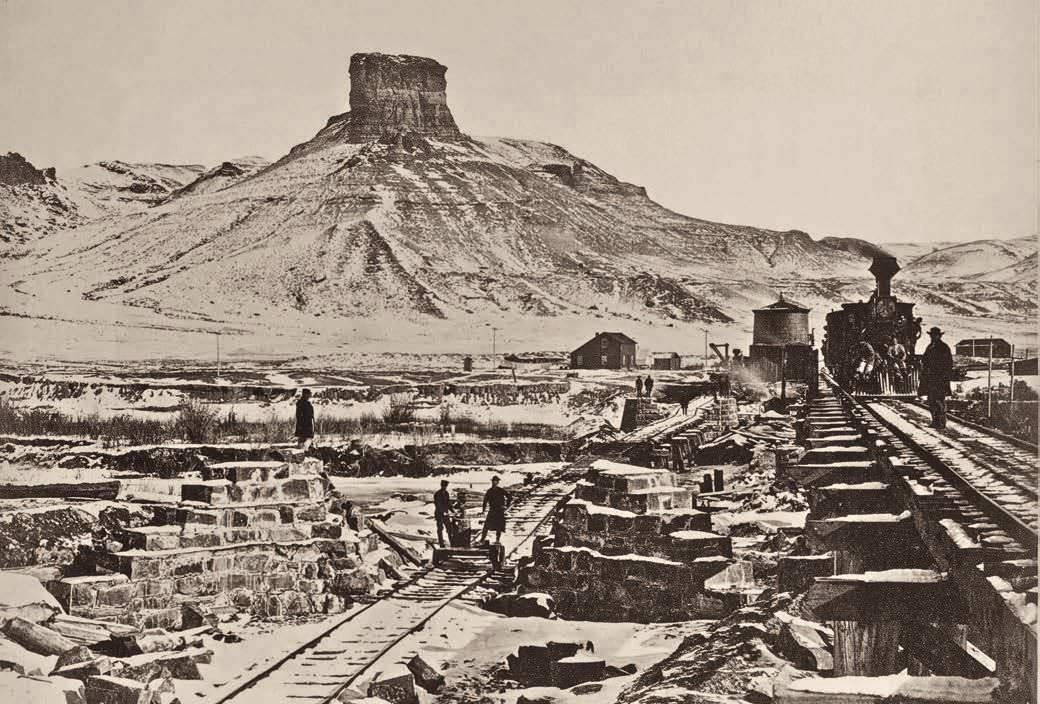 Travel across Iowa, Nebraska and Wyoming to discover how the Union Pacific Railroad built the West 150 years ago.

A century and a half ago the Iron Horse galloped across the prairie and plains of Nebraska then over and around the mountains and across the southern Red Desert of Wyoming, spawning a few dozen cities that remain today and dozens more end-of-tracks towns that were brief enterprises.

Thomas C. Durant, vice president and general manager of Union Pacific, president of the Credit Mobilier, and a self-serving financial strategist, managed construction, but the work started slowly. Only 40 miles of track costing more than $500,000, was in place by the end of 1865, described by a newspaper reporter as “two streaks of rust across the Nebraska prairie.” Durant hired a young Union general and civil engineer, Grenville Dodge, who had built or rebuilt railroads during the Civil War and with whom Durant had worked on railroad construction in Iowa.

Across the Missouri, stately old Union Station in Omaha now houses the Durham Museum. At the nearby Union Pacific Museum you’ll find furniture and other items closely related to President Abraham Lincoln, who in 1862 had signed the Pacific Railway Act, leading to construction of the railroad.

As the tracks slowly crawled west over Nebraska, William Peniston and Andrew J. Miller opened a trading post near the confluence of the North Platte and South Platte rivers, when they learned it would become a construction camp for the Union Pacific Railroad. Dodge laid out the town of North Platte and, when John Burke moved a log building in from Cottonwood Springs to serve as a hotel, North Platte’s birth was complete. Soon the first newspaper, The Pioneer on Wheels, began publication in a boxcar. By the winter of 1866-’67 North Platte’s population swelled to 2,000 railroad workers and camp followers.