When The Circus Comes To Town! 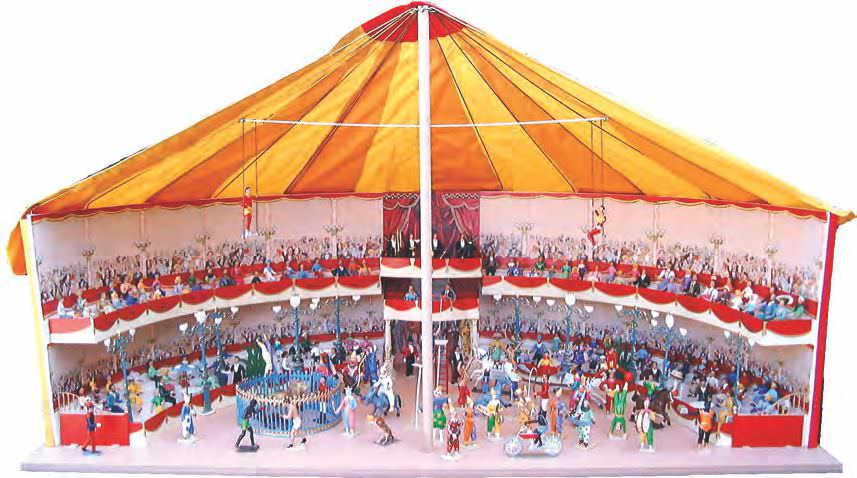 Keith Nairn-Munro harks back to the bygone age of the circus and takes a look at the many figures produced over the years to represent it.

The simple words “It's arrived!” could send a frisson of excitement sparking through the school that not even the fiercest teacher could suppress. Conversely, the words “We have ring side seats” could elicit a cloud of envy that could transform a fairly passive gathering into a cauldron of displeasure. Such was the power of the circus!

To try and convey the fascination that this institution engendered for many years after the war is exceedingly difficult. The reason being, it was of its time and we now view the whole tableau that formed the Big Top with such different eyes.

Nonetheless, if we can just for a moment set aside the awful nature of the animal training and the way they were kept, I would like to transport you back to a rather naive world where the glamour and spectacle of the circus entranced people of all ages and brought a sunbeam of pleasure into many mundane and dreary lives.

At the height of its post war popularity, there were three major circuses touring Britain, Billy Smarts, Chipperfields and Bertrand Mills. The power of the circus was so strong that no Christmas could pass without one being on the television. But the real magic and thrill was to be able to sit by the ringside, your senses bedazzled with so much to hear and see.

One minute you were laughing hysterically as the clowns threw buckets of water with abandon, often soaking the audience as much as themselves. Then in the next blink, your back pressed hard against the seat, you gazed spellbound as a lion flung open its cavernous mouth to roar displeasure at a whip cracking tamer.

You had just recovered when you had to stretch your head back, your mouth shaped in a silent scream as you beheld the impossible feats of the whirling trapeze artists. And all the while nearby was the calm presence of the urbane ringmaster watching, controlling and supervising the chaotic changing of settings required by each act. Adorned in his red tailcoat and black top hat, he would introduce, with extravagant portrayals, the next exotic and wondrous act. Consequently, when the performers entered the ring they were met with a wall of thunderous applause.

You were left breathless and exhausted and more often than not, covered in sawdust! As you reluctantly departed, the show at an end, you were sure that the dazzling lady riding the white horse had been smiling at only you. You would have of course impressed her had the lion tamer got into difficulties and needed your help. You had been desperate to be the volunteer the clowns took from the audience and when the strong man lifted those weights you thought, I could have done that.

The circus was where dreams were fashioned and memories made and like all facades it was better not to look behind the glitz and the splendour. The toy soldier makers were very well aware of the power of the circus and provided a conduit through which fantasies could be fulfilled.

Suddenly you could become that lion tamer or the trainer of the horses ridden by that beautiful lady. You could become a clown, something most young lads have a propensity to achieve without any real training or be that suave debonair ringmaster. All the figures were there just waiting to be directed by you.