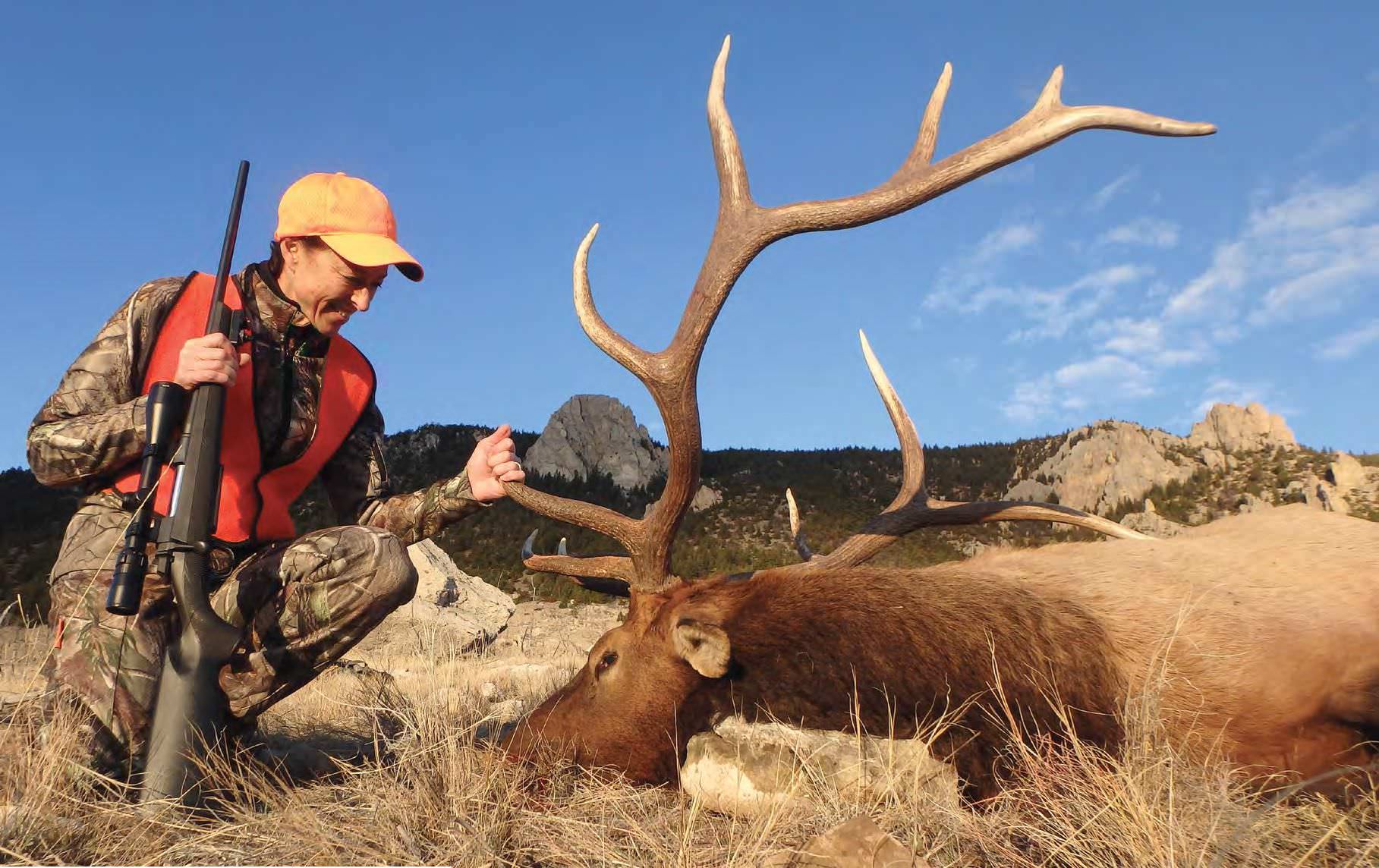 One Hunter’s Quest for a Public Land Bull.

A pattern emerges among people with a history of accomplishment. Successes are celebrated, but each achievement forms the groundwork for a greater goal. It’s not enough to simply maintain one’s performance. “Can I do better?” is the perpetual question self-posed to achievers from every walk of life. The same dynamic holds for the ambitious among elk hunters and is fittingly illustrated in the experience of my wife.

When we met a decade ago, she was intimidatingly skilled with a shotgun, competent with a fly rod and internationally traveled as a backpacker and trekker. The opportunity to hunt big game was embraced with her typical enthusiasm and personal skill as an athlete and adventurer. Shooting a rifle with the requisite ability for hunting was quickly mastered. Hiking the hills in search of deer or scouring the prairie for antelope was just another reason to be outdoors, and within a few, short years she had downed several antelope, whitetail deer and a fine mule deer buck.

Lisa yearned to kill an elk. Like countless other big game neophytes, she found elk hunting reminiscent of lyrics to a classic Larry Gatlin tune. In it, the singer asserts that musical success in California is the consummation of a crooner’s career and not so easily attained. “If you go dreamin’ about California, it don’t matter at all where you played before, California’s a brand new game.” Substitute “elk hunting” for “California” (who wouldn’t?) and the refrain is equally fitting.

A fruitless first year in Montana and Wyoming taught Lisa that shooting opportunities for wapiti are often more fleeting than those with deer and pronghorn. She developed a better eye for spotting elk and embraced the rigors of penetrating the roadless habitat favored by these cagey forest-dwellers. A second season yielded a happier outcome. We were seated at the edge of a narrow clearing on the forested buttress of a treeless ridge in Montana when a small band of elk scrambled into the meadow, undoubtedly nudged in our direction by other hunters. A young cow at the back of the herd hesitated, reluctant to follow the others into the open. Lisa’s reactions were swift and efficient. A Nosler 150-grain Partition shattered the shoulder blade of the quartering cow, penetrating to the hide of its opposite hindquarter. In a single, perfectly executed shot, my outdoor sweetheart became a bona fide elk hunter.

Giddy with excitement, she helped prepare the cow for packing. We had forgotten saddle panniers in camp but improvised to avoid a 10-mile ride the following day. The front quarters were crammed into Lisa’s large daypack, most of her gear and the loins shoved into the spare space in my pack. The two packs and some clothing were tied to her saddle. Short on rope, two remaining lengths of cord were looped through the tendons of the rear quarters and passed around the horn on my own saddle. We stole the reins from a bridle and used them to secure the quarters, hair-side in, to the D-rings. Leading the animals back to camp, I’m not sure who was happier, Lisa for her first elk or myself for the farm-boy ingenuity of the pack job.

Her cow fell the first morning of the hunt. By the time we departed days later, the accomplishment was fueling ambition. Perched contentedly in the front seat as we bumped on a rutted track out of the mountains, she gazed upon elk country; flowing lowlands of gilded sward and gray sage rising to tussle with encroaching pines at higher elevations, the deep green forest yielding to barren ridges, some clothed in fine alpine forage, others frowning, lifeless promontories of gravel and stone.

“Next year,” she pronounced with conviction, “I’ll try for a bull.” She did, but the 4-point stag that clattered through the same clearing where she’d bagged the cow showed none of the same hesitation. The previous season, Lisa was dozing while I watched the meadow. This time I was fast asleep when the bull made its appearance. She elbowed her “no-good guide” awake to see the animal of her ambitions galloping into the timber.