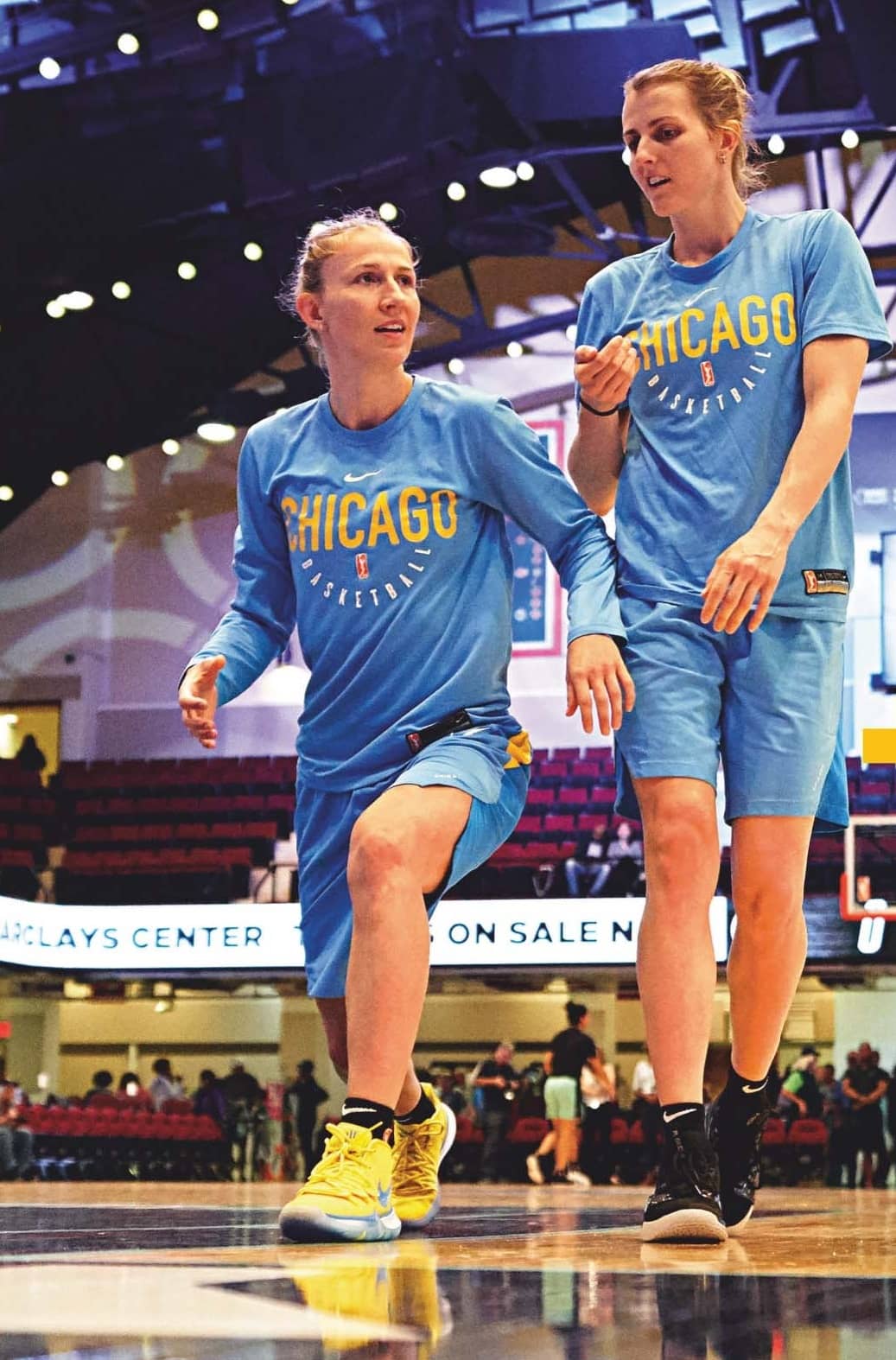 Sky point guards Courtney Vandersloot and Allie Quigley—who were wed last December—have learned how to navigate the peaks and pitfalls of their itinerant careers while pushing each other to become better players.

Joan Niesen
TWO WEEKS before her wedding, the bride jammed her ring finger. In what would end as an 82–68 victory for her Russian team, UMMC Ekaterinburg, point guard Courtney Vandersloot lunged for a rebound, and the basketball caught the tip of her digit. The knuckle swelled instantly.

From a few feet away, Familia Schio’s playmaker winced. Allie Quigley, the star of the Italian squad, had a vested interest in that hand. Foes that day in central Russia, Quigley and Vandersloot returned to being fiancées at the buzzer—at which point they each had one more game to avoid their worst shared fear: a prenuptial black eye.

Fortunately for the point guards, no opponent’s elbow left a mark. Vandersloot’s ring finger, however, remained so swollen that she was forced to wear her bling on her right hand. And on Dec. 28, the Vanderquigs, as they playfully call themselves, were married before 100 guests in Vandersloot’s hometown of Seattle. After keeping their relationship out of the spotlight for more than five years, Vandersloot posted a photo on Instagram of herself and her wife in their sleeveless lace gowns, holding hands in front of Puget Sound. As the well-wishes continued to pour in, they had a mere three days together before heading back to join their teams in Europe. Their honeymoon would have to wait until . . . well, they’re still not quite sure when.

THE STORY of how WNBA teammates decided to get married begins, of course, with hoops.

At the end of the 2012–13 Euroleague season both women were playing in Slovakia. Vandersloot was about to return to Chicago for her third year with the Sky; she had been the West Coast Conference player of the year three times at Gonzaga and was the No. 3 pick in the 2011 draft. Quigley, three years older, had played for five WNBA teams in four seasons since graduating from DePaul in 2008. After going unsigned in 2012, she was considering quitting basketball in the U.S. before her hometown Sky invited her to training camp. Thus, when Quigley’s team (Kosice) faced off with Vandersloot’s (Ruzomberok) in a five-game series to decide Slovakia’s champion—Kocise won—each woman scouted her competition for playing time in Chicago. They found themselves on the same flight back to the U.S. and in the same limousine from the airport to the doctor’s office for team physicals—beginning to get to know each other en route. “I’m not very talkative, especially with strangers,” Vandersloot recalls. “I just don’t like small talk, and I never felt that with her.”

The women acknowledged their mutual feelings when Quigley made the team, but agreed that anything more than friendship would have to wait until the WNBA season was over. So in late September, before flying to Poland (Quigley) and Hungary (Vandersloot), they decided to begin dating.

While overseas they glued their phones to their hands, latched onto WiFi and video-chatted as much as possible. Jantel Lavender, the Sky center who played with Quigley for Wisla Krakow that winter, recalls her teammate groggily smiling over FaceTime in an airport at 4 a.m., Vandersloot’s wide eyes and blonde bun filling the screen. Being apart wasn’t so bad at first; Krakow is a five-hour drive from Gyor, Hungary, manageable for an off-day visit. But then Vandersloot’s team folded, and she ended up with the team in Schio, Italy. It was a harsh reminder that love and basketball can be a difficult combination.

Once back in Chicago, each negotiated the peaks and pitfalls of being in a relationship with a teammate—a first for both women. There was comfort in partnering with someone who knows the unique demands of being a professional athlete, but too much proximity could be overwhelming. There was “not a lot of breathing room” at times, Allie’s sister, Samantha Quigley Smith, says, but the relationship was committed from the start. “I could see in Allie’s eyes and her behavior that Courtney had changed her so much for the better.”