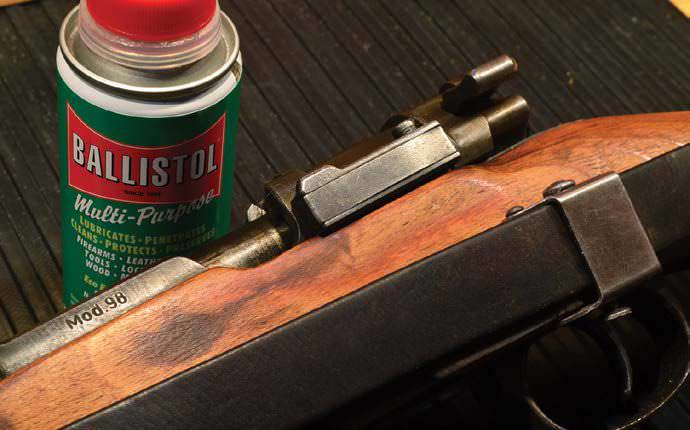 There was a time – not that long ago – that if you neglected to clean a rifle regularly, you could pick it up one day and find the barrel rusted, the bore pitted, accuracy nonexistent and the action turned to scrap metal.

There were several causes: Corrosive primers fostered rust, ingredients in gunpowder mixed with water to form acids and ate away at things, and salt from fingerprints etched patterns in the steel.

In the black-powder era, it was even worse. Woe betide the shooter who came in from a day in the field and did not immediately take his gun apart, clean it thoroughly and oil the bits. In rain-soaked Scotland, this ritual was so much a part of shooting that time in the gun room became a social occasion and even sparked a subgenre of shooting literature. Books called In the Gun Room, or something similar, were written by several well-known shooters, including the redoubtable Major Sir Gerald Burrard. These charming works combined practical information on gun maintenance with asides on everything from combating grouse ticks to cooking hares.

In those days, riflemen became intimately familiar with their guns because they were constantly dismantling them, checking parts and servicing intricate mechanisms. That, alas, is a valuable aspect of shooting that has been largely lost, simply because we no longer have an overwhelming requirement to clean guns regularly. Unless a rifleman has a deep interest in how things work, there is really little requirement to take much apart.

The average owner of an AR, shooting modern .223 Remington ammunition, could go indefinitely without cleaning it, and the only risk would be a slight loss of accuracy due to cuprous fouling. As for the standard, greased .22 rimfire, unless a rifle was dropped in a river, you could literally never run a cleaning rod through it, and neither it nor you would suffer any ill effects.

Old habits die hard, however, and those of us who were commanded from an early age to clean our rifles mostly still do it. In some cases there is a valid reason, such as shooting jacketed bullets at high velocity through bores that are expected to deliver tiny groups. Cuprous fouling degrades accuracy, and it needs to be kept under control. Being a lifelong addict to the entrancing scent of Hoppe’s No. 9, I used it for years even though the original formula does little about the cuprous-fouling problem. Benchrest 9, which contains a generous dollop of ammonia, handles it nicely, although it does require a few days of repeated applications.