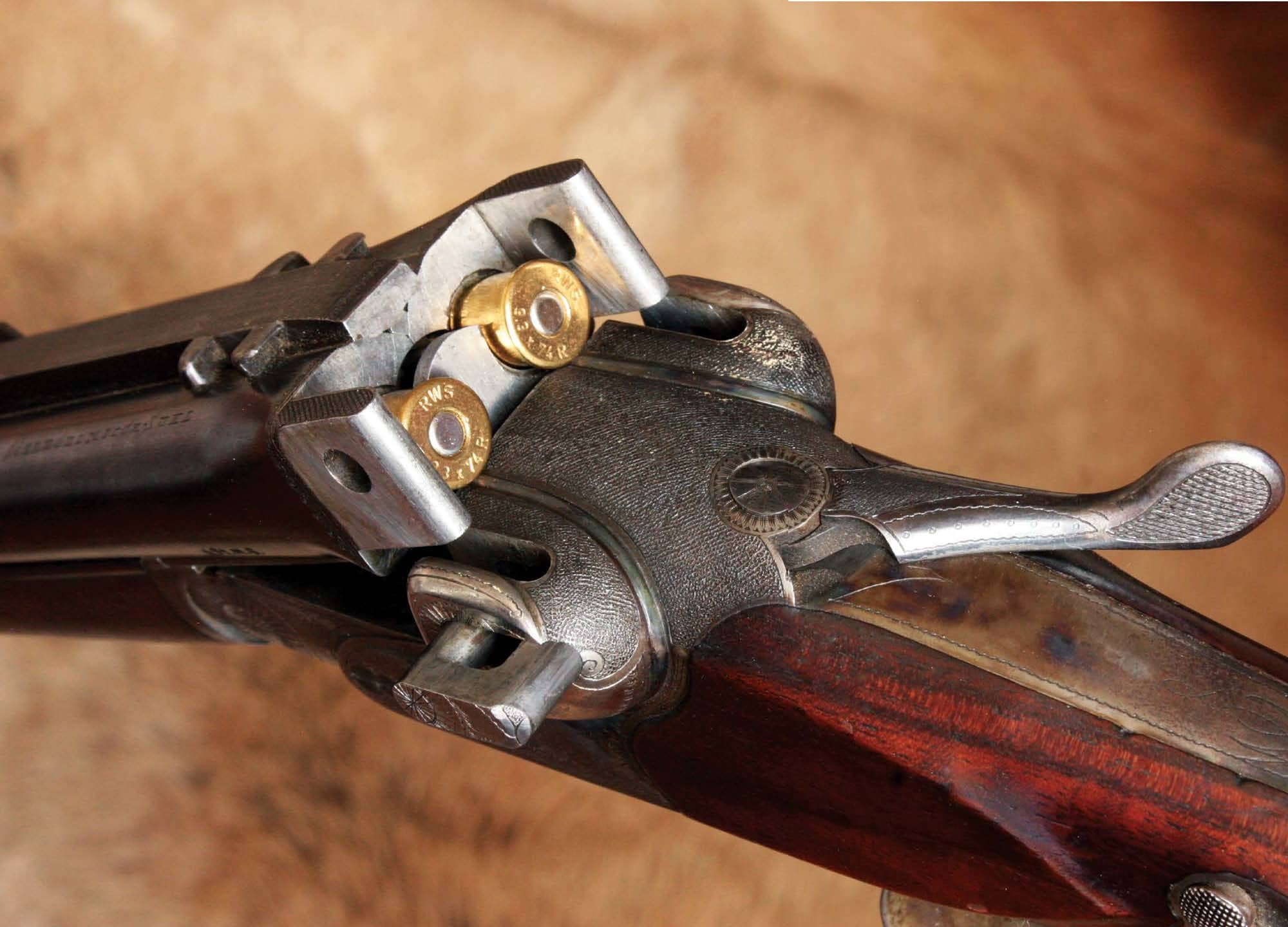 Many American hunters dream of owning a double rifle suitable for hunting dangerous game in Africa. This is usually due to reading classic African hunting literature from the first half of the twentieth century, when smokeless powder made powerful doubles far more practical and effective than the really big-bore, black-powder rifles they replaced.

Smokeless side-by-sides (and they normally were side-by-sides, not over/unders) could be built much lighter than doubles chambered for cartridges measured in gauge, not caliber. Smokeless ammunition was trimmer as well – potentially important when after lions, Cape buffalo and elephants. The ability to personally carry plenty of ammunition made running out less likely during a dangerous dust-up.

Double-rifle dreams often include fantasies of standing next to a professional hunter (PH), blazing away at an oncoming lion, buffalo or elephant. Doubles were considered the best “stopping rifles” by most PHs because they offered two very quick shots, often all a hunter had time to shoot in thick cover; if the first shot failed to stop the animal, an immediate second shot could be very handy.

Doubles also easily accommodated bigger cartridges than even the largest bolt actions. Many early big-bore smokeless cartridges were very long to keep pressures low enough for tropical use with early heat-sensitive powders. Unlike bolt actions, double rifles lacked magazines that can limit cartridge length: Instead, rounds are manually fed directly into the chambers, one reason over/unders were rare: They had to be opened wider than side-bysides to reload – not as handy in an elephant emergency.

All those reasons make sense for a professional hunter, whose most important job is the safety of his clients. It does not necessarily make sense for the average safari hunter, because a well-placed initial shot is the best way to “stop” a charge – by preventing it from ever happening.

This requires accurate bullet placement, and an unfortunate characteristic of big-bore double rifles is mediocre accuracy. Consistently putting a “right and left” within 3 inches of each other at 50 yards is generally considered good enough, and a big-bore double that keeps all its shots inside 3 to 4 inches at 100 yards is considered the dangerous-game equivalent of a benchrest rifle.

This is partly due to the traditional open “express” sights on doubles, one reason many safari clients cannot shoot doubles very well; many of them have never hunted with irons of any kind. Also, many hunters have never used double-barrel shotguns with two triggers, which can prevent firing a quick second shot from a big-bore double. Both are among the reasons most PHs recommend a scoped bolt action to their buffalo clients.

Here it should be noted that my very first shotgun was a 12-gauge side-by-side with two triggers inherited from my paternal grandfather, and I’ve always owned at least a couple of double-trigger side-by-sides ever since. This is partly why I really wanted a bigbore double rifle after almost taking a Manton .450/400 Nitro Express (3-inch) owned by my friend Tim Crawford on my first Cape buffalo safari in Zimbabwe nearly 20 years ago.

Tim generously loaned it to me when Brian Pearce and I planned a mini version of Theodore Roosevelt’s 1909-10 safari, inspired by the reintroduction of the Model 95 Winchester .405 WCF, Roosevelt’s “lion medicine.” We could not afford a lion but could afford buffalo and plains game, and along with the .405 planned to take my 1903 Springfield sporter with a receiver sight, emulating Roosevelt’s “little Springfield.” Tim decided we needed a double as well, since just before Roosevelt’s safari several of his friends (alarmed at his plan to use the .405 as his “big” rifle) presented him with a Holland & Holland double in .500/450 Nitro Express. (However, I suspect another reason for Tim’s loan was so I could work up handloads.)

Double rifles are “regulated” at the factory to shoot a specific factory load, a process involving test-firing. This is because side-byside barrels sit on either side of the rifle’s centerline. The right barrel tends to recoil to the right, and the left barrel to the left. As a result, the bores are not parallel but angled slightly toward each other. If the barrels shoot to slightly different places (and at first they almost always do) the angle gets tweaked, and the rifle is test-fired again.