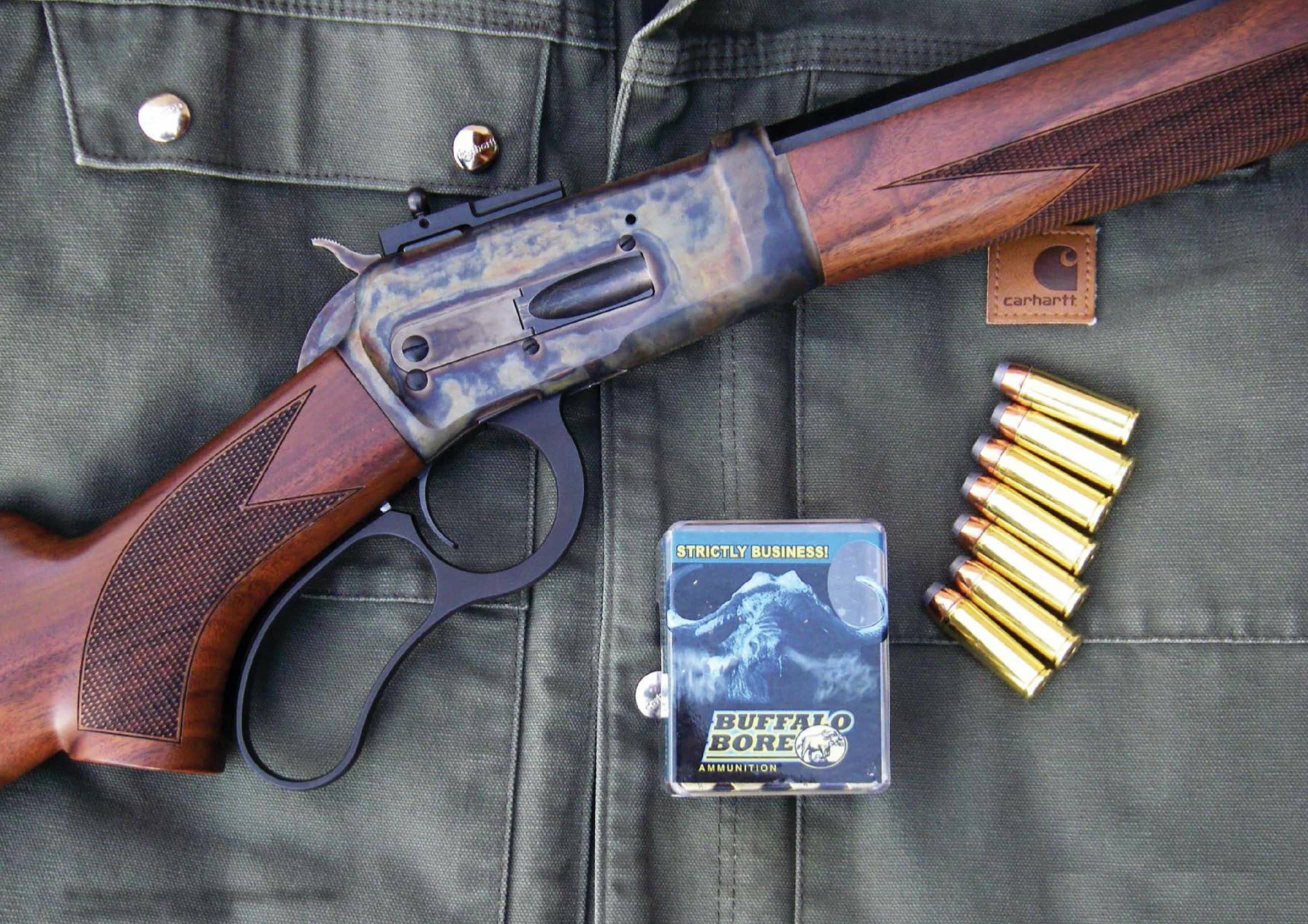 Big Horn Armory began developing a new lever-action rifle in 2008 that became known as the Model 89 Spike Driver, with production underway in late 2012.

It was the first production lever gun to be chambered in .500 S&W Magnum. The action is based on a scaled-down Winchester Model 1886, or an enlarged version of the Model 1892, but with additional engineering and the use of high tensile steels to obtain the necessary strength to easily handle modern, high-pressure revolver cartridges.

The next version offered was the Model 90, which was more or less identical except that it was chambered in .460 S&W Magnum. It was followed by the Model 90A .454 Casull. Additional variations have been offered in .45 Colt, .475 and .500 Linebaugh. Each of these cartridges produced substantial performance increases when fired from a rifle-length barrel as opposed to velocities when fired from a revolver.

A Model 90A carbine .454 Casull was chosen for this review because the cartridge offers certain advantages. First, if a revolver in the same caliber is selected, it is generally lighter and more compact than guns chambered for the two Smith & Wesson cartridges. Ammunition costs are less, and it has the advantage of firing and cycling .45 Colt ammunition for increased versatility. In spite of its much smaller size, the .454 can exceed the performance of standard-pressure .45-70 Government factory loads by pushing a 300grain bullet nearly 2,000 fps, which is around a 125 to 200 fps advantage. Furthermore, the .454 is adequate for hunting all game in North America, including moose and the great bears of the north.

The sample rifle displays top-notch machining, is finely finished and produced excellent accuracy. Standard versions of the Model 90A feature a receiver constructed of 17-4PH stainless steel, noted for its extreme strength and durability. It can be ordered with an “in the white” brushed finish or with a Black Hunter finish (more on that in a moment). Also available is a receiver constructed of 4140 chrome-moly steel that can be color case-hardened for additional beauty. A detailed inspection of the CNC-machined receiver reveals precision-machined surfaces both inside and out.

The 90A features twin, vertical locking lugs that are known for providing great strength. These items, along with other detailed engineering features not discussed, are important to properly contain the .454 Casull (as well as the .460 and .500 S&W cartridges) that has an industry maximum average pressure rating of 65,000 psi. In addition to producing significant head thrust and generating pressures that are the same or higher than modern magnum rifle cartridges, the impulse time is only around one-third that of cartridges such as the .270 Winchester and .300 Winchester Magnum. This extremely sharp pressure curve will quickly strain inadequate actions. However, the Big Horn Armory Model 90A is designed specifically to handle fullpower .454 Casull loads.

The Model 90A carbine used here features the optional case colored receiver and forend tip. While it does not exhibit exactly the same colors as vintage Winchester and Marlin lever guns, it is nonetheless attractive.

The barrel, magazine tube, lever and bolt are finished in what Big Horn Armory refers to as Black Hunter, which is attractive while offering low glare and is practical for field use. Technically this finish is a salt bath nitride that is absorbed into the metal and results in a tougher, durable finish with a Rockwell hardness that exceeds 80.