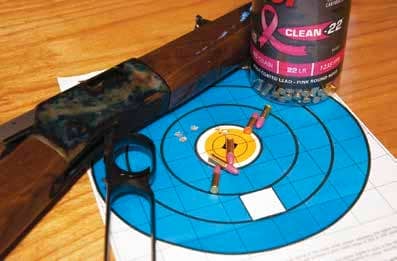 Shooters have never had it so good in that new handguns, rifles and cartridges seem to pop up on a regular basis these days. Not a year goes by without one, two or more cartridges being heralded as the “next best thing” since the previous “best thing,” even if it provides only a minor ballistic enhancement over its predecessors. This is all well and good, but it wasn’t always so easy. Few early rifles, or handguns for that matter, have come before the development of, or at least the inspiration for, a cartridge design. After all, what good is a gun without something to shoot from it?

In the early days of ammunition design, it sometimes took long years before a new cartridge was finalized and made available for public consumption. Even the .22 Long Rifle, the most purchased and most useful rimfire target and plinking/small-game cartridge in the world, had several predecessors that, over time, became antiquated and more or less forgotten or ignored. The same can be said for various and sundry rifles like the lever-action Browning BL-22. As such, it seems worthwhile to briefly highlight the history of important .22 rimfire cartridges. (Those .22-caliber rimfire cartridges that quickly fell by the wayside are not noted due to space.)

It is widely known that Smith & Wesson introduced the first successful .22-caliber rimfire cartridge. It was first called the Number 1, but rimfire enthusiasts know it today as the .22 Short. It was first chambered in the “tip-up” Number One, seven-shot revolver first produced around 1857, with other variants following (Standard Catalog of Smith & Wesson, Supica and Nahas, 2001).

The Number One revolver and its derivatives may not have been developed, however, if not for the fertile mind of Frenchman Louis-Nicolas Flobert (1819-1894), a firearms/cartridge designer who manufactured “gallery guns.” Sometime in the mid-1840s (or 1830s, references differ), Flobert’s .22 BB Cap (bulleted breech cap) cartridge was devised and recognized as the first self-contained metallic cartridge. It consisted of a percussion cap stuffed with a lead ball. Flobert’s CB Cap cartridge fitted with a conical bullet followed. It is said that Flobert continued to produce ammunition until 1847.