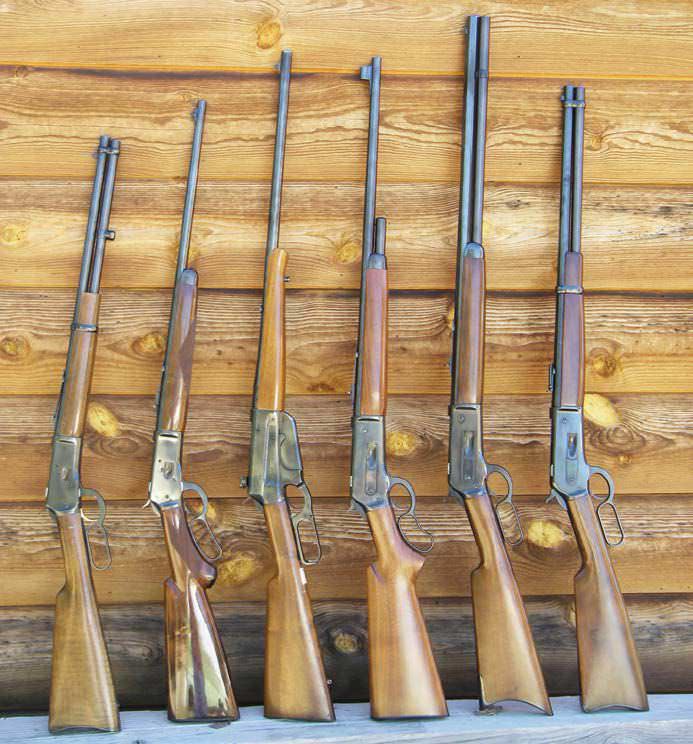 In 1978 Browning Arms Company began importing a series of Winchester pattern lever-action rifles and carbines that were produced in Japan by Miroku. Each model variation was based on the designs of John M.

Browning, who originally sold his patents to Winchester Repeating Arms Company, with all becoming highly popular rifles. The modern Browning versions are of particularly high quality, at least in regard to machining and steel quality, resulting in outstanding reliability, strength and accuracy. They have been chambered in both modern and traditional cartridges.

In spite of being patterned after original Winchester rifles and carbines, the Browning rifles were built on metric tooling. As a result, screws, barrel threads and other parts are not generally interchangeable. Other minor design changes included coil mainsprings, etc. Nonetheless, they displayed top-notch machining, tight tolerances and were thoroughly tested by the factory for function and reliability.

Browning barrels were forged from heat-treated steel billets and were meticulously straightened for top-notch accuracy. Their internal surfaces usually exhibited a mirror-like finish that had the potential to produce excellent results with both cast and jacketed bullets.

Unlike subsequent Miroku guns sold under the Winchester trademark, Browning reproductions are void of the rebounding hammer known to occasionally cause misfires and inhibit smooth function when being cycled at the shoulder; nor do they have the undesirable tang safety. Instead, they function exactly as Mr. Browning intended.

The first in this reproduction series was the Model B-92 Centennial carbine .44 Magnum that appeared in 1978. It was lightly engraved to celebrate 100 years of the Browning Arms Company. The unadorned standard model appeared in 1979. They were instantly popular and retained all of the handsome lines of vintage Winchester Model 1892 carbines, including a steel buttplate, a 20-inch round barrel, and only weighed around 5.5 pounds. I purchased one of the first ones produced and have owned or fired several in the years since. Initially, my only real criticism was that the barrel bands were aluminum rather than steel.