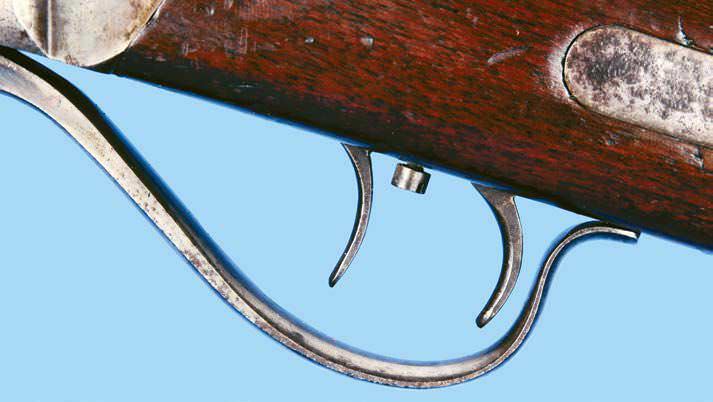 Set triggers are an anachronism; a holdover from a bygone era. Immensely popular in their heyday, my bet would be that the vast majority of today’s riflemen and hunters are not familiar with them at all. In simple terms, a “set trigger” is a mechanism by which a rifle is fired with a trigger pull weight measured in ounces instead of pounds. It is meant for precise shooting and not for fast shooting – or what some hunters might call “snap” shooting.

Such trigger mechanisms come in three basic types: Wide-spaced double set, close-coupled double set and single set. All three types work differently. The usual arrangement for wide, double-set triggers is for the rear trigger to set the front one. In other words, the shooter pulls it rearward until it “clicks,” which means that the front trigger will then release with mere ounces of pressure. The front trigger can be used to fire the rifle by itself, but the pull is relatively heavy with plenty of slack.

Wide double-set triggers can be adjusted with a tiny screw between the two triggers, and it can be inadvertently turned. For example, at a recent match my Shiloh Sharps Model 1874 with double-set triggers went off just as I inserted my finger into the trigger guard. I chastised myself for being ham-handed. The next shot went off just as my finger touched the front trigger. Sure enough, the pull weight adjustment screw had moved slightly. When rotated a half-turn counterclockwise, the front trigger was adjusted back to its preferred approximate .5-pound weight. It might interest readers to know that in owning and shooting more than 40 original and reproduction Sharps Model 1874s for almost 40 years, this was the first time such a thing has happened to me with double-set triggers.