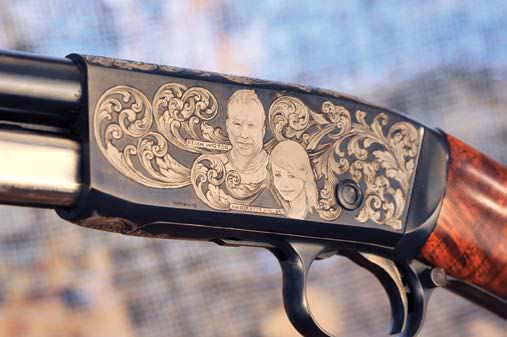 As a kid running around the farm during the summer, I always had my uncle’s little Winchester single shot to ply the fields for small game. At that time it seemed every manufacturer had a rimfire rifle of some kind, so it was not uncommon for Remington to also have one of its own on the market. One of the more popular rifles was the Model 12 pump, or slide action, introduced in 1909, and for this installment of “Custom Corner,” we have one reworked and decorated to the highest degree.

According to Kevin Wigton, gunsmithing manager at Williams Gun Sight Company, this rifle was a 2013 high school graduation present for his daughter who just loves to shoot. He told me it is the Model 12C that, according to Remington history, is listed as the “Target” model with a plain straight stock. Looking at the Model 12C now, it is a far cry from the original and, comparing it with older literature, it could be right in line with Remington’s fully engraved 12E and 12ES guns of the time.