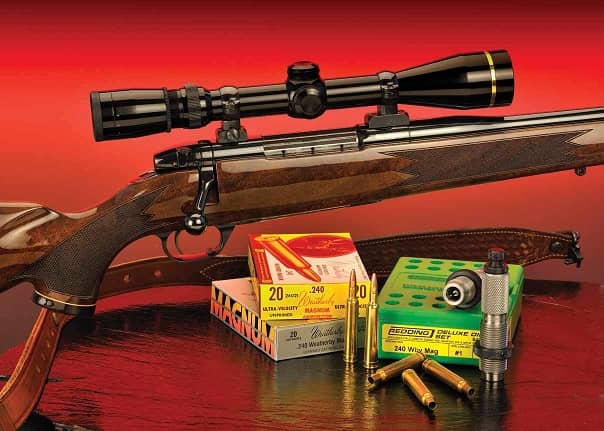 Varmint Loads for a Magnum

There is an old saying that comes to mind... “You can’t teach an old dog new tricks!” The more I say it, the more I feel it relates to me. In all the years I’ve been chasing the elusive woodchuck, .22-caliber rifles have been the mainstay of my hunts. From rimfires to vintage wildcats to modern handloads and commercial entries, I don’t think I missed one. Now don’t get me wrong, I am not feeling like I’ve reached the end of the race, but it’s nice to try something different or to venture into uncharted territory.

Moving up the scale, the 6mms came into focus as of late. The 6mm Remington in a Model 700 got plenty of use with lighter bullets. On a whim, I ordered a Savage Benchrest rifle in 6mm Norma BR. Looking deeper and being a Weatherby fan, its .240 Weatherby Magnum (WM) got more than a casual glance and is the subject of this article.

But why the .240 WM, or any other 6mm for that matter? Most dedicated varmint hunters will say it kicks more and is not a good choice for all-day shooting. Well, yes and no, depending on how you look at it and the location of your hunt. Okay, for all-day shooting where prairie dogs are in abundance, any 6mm is not a good choice for many hunters, as it can get uncomfortable to shoot – no question there. However, in my neck of the woods in the northeast, since the coyotes are taking a toll on the marmots recently, the 6mm is a good choice considering you may only get three or four shots a day and most of them will be along the stonewalls, not in the open fields as in the past.

With that established, the .240 WM needs a rifle to shoot it in, and since I did not want to invest in a custom rifle, the handsome Weatherby Deluxe was my choice. While there are other rifles in the line that chamber this high-stepping 6 millimeter, including those with synthetic stocks, this fancy, almost custom rifle was the one for me. A call to Weatherby had one on my doorstep in a short time. 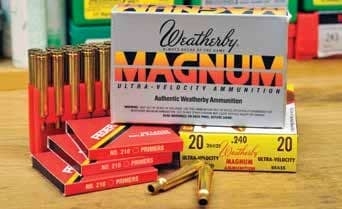 Like the past .224 VarmintMaster, this rifle has a smaller action made for the compact lines of the .240 WM and a six-lug locking arrangement rather than the larger nine-lug affair on the larger Mark V. Aside from that, the action is polished to a very high gloss and is made in the new plant in Wyoming. The stock is typical Weatherby with the Monte Carlo-type design, select wood, cut checkering and a Decelerator recoil pad. For my tests, a Leupold 2.5-10x scope mounted with the company’s two-piece bases and medium rings completed this rig. Just for the record, this rifle will not accept Mark V bases; you have to order the set made and marked for the smaller or VarmintMaster action.

Onto the cartridge: Introduced by Roy Weatherby in 1968, it was his original intent to overshadow every other 6mm on the market with his proprietary double radius case. While performance margins appeared to be higher back then, new powders and technology have seemed to bring the .243 Winchester and the 6mm Remington closer to the Weatherby product. According to factory offerings using a 100-grain bullet, the Weatherby provides 3,406 fps, and the 6mm Remington 3,100 fps – a 10 percent advantage to Weatherby. With an 80-grain bullet, the Weatherby musters 3,503 fps; the .243 Winchester 3,350 – only a five percent advantage to the Weatherby, but it is faster. Handloading will up the ante a bit, but not at the cost of overloading any case just to prove a point. 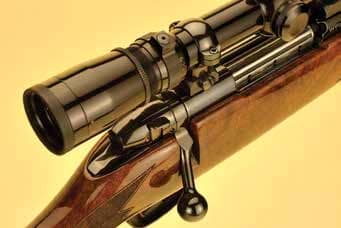