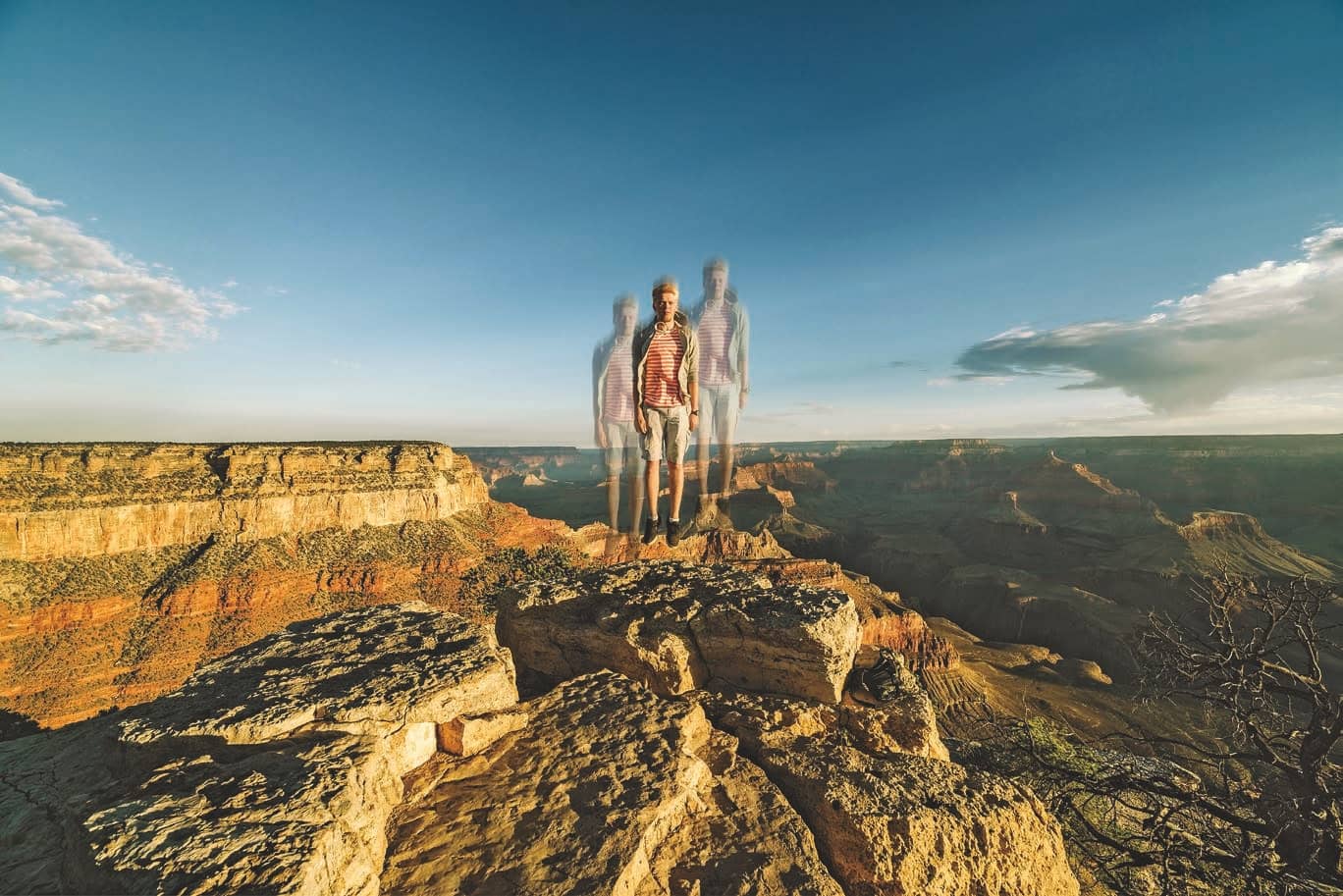 Are social media and selfie culture killing the outdoors? Nah, but as a visit to some heavily Instagrammed places reveals, they’re challenging our notions about whether there’s a right way to appreciate nature—and who gets to do it.

I’ll begin with the story of YS Falls, a set of cascading drops and cool, clear pools set in a Jamaican rainforest. It’s in Saint Elizabeth parish, where for a few years now I’ve been taking my son on vacation. Saint Elizabeth is a beautiful part of the country, far off the beaten path; to reach it from Montego Bay or Kingston takes four or five hours on bad roads. There are few walled resorts here, no package tours of sunburned Americans and Europeans getting drunk at 10 A.M. The people are nice but not too nice; large stretches of the coasts remain undeveloped. I like it because it has yet to be ruined by people like me.

According to locals (and TripAdvisor), YS is one of the wonders of Saint Elizabeth. Last April, on what happened to be my son’s 15th birthday, I hired a taxi to take us there. Davey did not want to go; he wanted to “chill” and “sleep in.” But I wanted to “experience this natural wonder.” So my angry kid and I arrive at YS, which upon first impression is paradisiacal. We walk into the main building, where we must pay a fee (OK, fine), and we are assigned a guide. There is no other way to see YS; we can’t wander around on our own. The guide asks for Davey’s iPhone. I think he’s holding it to keep it safe and dry. But no. For the next hour, he herds us through the falls on a trip that is organized entirely around photo ops. We’re trapped in a conga line of tourists, each group with its own guide who’s holding their smartphones, taking Instagram-worthy shots. We are told to pose in front of one set of falls and—tap!— the guide gets the shot. We’re told to frolic in a pool and—tap!—we’re captured sheepishly frolicking. We are in a kind of hell.

We climb to the top of the tallest falls, where they’ve built a deck jutting out over a pool 25 feet below. The guide instructs Davey to jump; the point of this, of course, is the shot that will be produced of him flying in midair.

Quickly, before I can object, the guide shoves him off the ledge and—tap!—gets the picture of my son arcing out over the falls. I run onto the deck to look for him below. Thank God, he’s swimming to the edge of the pool. The guide shows me the picture. I must admit, it’s an epic shot.

Davey won’t speak to me after that. Happy birthday! But when we’re back at our villa, I notice that he has posted the picture to his Instagram feed. He’s already up to 83 likes.

FAST-FORWARD four months. It’s nearly sunset, and I’ve just arrived at the South Rim of the Grand Canyon, one of the most touristed spots in the U.S. and a regular top-ten on lists of the most Instagrammed parks in the world. I’m on assignment for this magazine to write about the pernicious effects of social-media culture on how we experience the outdoors.

Arizona, with 24 national parks, monuments, and other federally protected areas, has its share of Instagram icons: the End of the World campsite in Coconino National Forest, the overlook at Horseshoe Bend in Glen Canyon National Recreation Area, Devil’s Bridge in Sedona. These places, and YS Falls, too, are on my mind. A takedown should be easy.

I board the last shuttle bus to the Hopi Point vista and arrive in time to catch the sun going down. I am annoyed at what feels like extreme management by the park—you go everywhere by shuttle here. But the guy in the El Tovar gift shop said Hopi Point at sunset is worth checking out, and I’ve decided to trust him.

It’s hard to describe exactly what I see—a picture would be better—but I’ll try. There’s a bus stop, yes. But beyond the pavement lies cool, high desert with scrubby stands of piñon and juniper, and limestone cliffs that drop nearly 5,000 feet into the vastness of the canyon below, stretching out northwest to Havasupai Point. As the sun sinks, the canyon transforms into folds of burnt orange and red, then magenta, then purple. Towering cumulonimbus clouds gather in the northwest, threatening to obscure the sun but holding off just long enough for it to shoot its rays dramatically across the horizon at the moment it slides beyond the canyon rim. “Holy motherfucker,” I whisper to no one in particular.

There have to be 75 to 100 of us here, all with smartphones in hand, tapping away. One teenage girl positions herself in warrior one pose on a rock, her back to the sun, slender arms overhead, taking a selfie. Nearby there’s a group of French guys murmuring “C’est magnifique” as they take photos of themselves in the gloaming. I think about an article I’d read by Sherry Turkle, an MIT professor who has studied the psychology of selfie culture. “A selfie, like any photograph, interrupts experience to mark the moment,” she wrote in The New York Times in 2013. “The selfie makes us accustomed to putting ourselves and those around us ‘on pause’ in order to document our lives. It is an extension of how we have learned to put our conversations ‘on pause’ when we send or receive a text, an image, an email, a call. When you get accustomed to a life of stops and starts, you get less accustomed to reflecting on where you are and what you are thinking.”.

Following this logic, I should be judgmental of the yoga girl and the French boys, with their need to interrupt the experience in order to place themselves in the frame of all this magnificence. But these people seem to be getting something almost spiritual out of being on pause here. There’s a collective sense of reverie, of being undone, in a good way, by what we’ve all just seen.

Dangerously close to the edge of the rim, snapping sexy posed shots of one another, are three young women in Lululemon-ish garb. Aha! Maybe they will be the poster children I seek for the scourge of Instagramming the outdoors.

Possibly sensing my agenda, the women will only give me their first names and where they’re from. They went to college together and meet for vacation every year. “We are doing the Grand Canyon till tomorrow, then Sedona. We’re gonna do an energy reading there. It’s a true vortex,” says Allie, who lives in Syracuse, New York, and is 33. She’s getting some pics of Deanna, 33 (also from Syracuse), and Krystal, 30 (Boston). “I promised my boyfriend I’d post a story a day,” Allie says. Is she posting on Facebook, too?

As darkness falls, all of us queue up quietly at the bus stop, waiting for the shuttles that will ferry us back to Grand Canyon Village. Everyone seems happily spent from the experience, and I feel much bonhomie for this group of strangers. Even for Allie, who declines my request to follow her on Instagram.

“No offense,” she says as we board the bus, “but my stories are for my family and friends.”