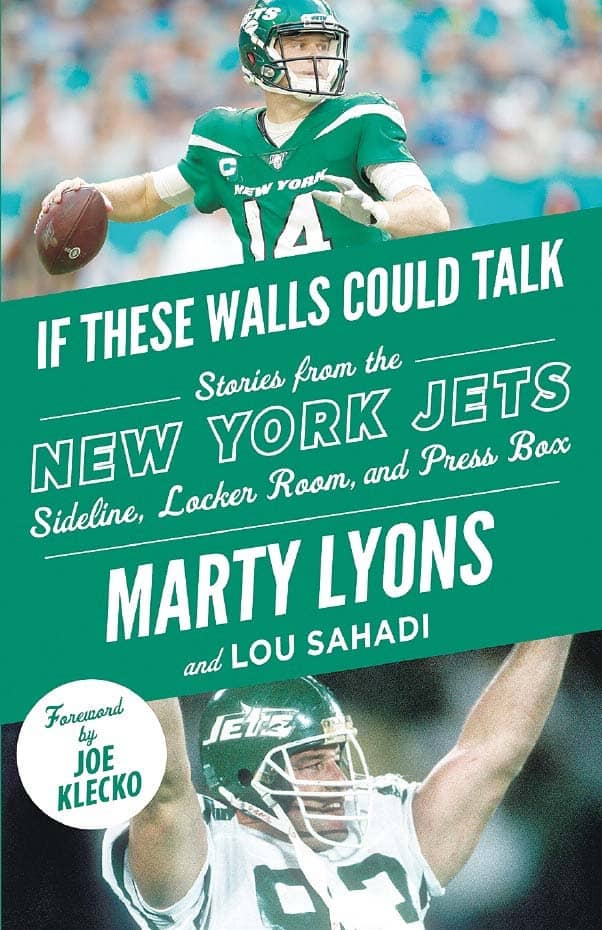 Jets Confidential: Marty, you live on Long Island, where there are a lot of Jets fans, and are highly recognizable to Jets fans. What do you say to them when you see them at a Dunkin’ Donuts or supermarket when they ask you about what’s going on with the team right now?

Marty Lyons: I deal with it with a little bit of humor and a lot of honesty. If you look at the roster, how many of these guys could start for the other 31 teams in the NFL? You go down the list, and you hit a couple of players, and that is about it. So one thing people have to understand is this is going to be a true rebuild by Joe Douglas.

JC: What was your take on the Mud Bowl, the 1982 Jets loss to Miami in the AFC Championship Game at the Orange Bowl? Do you think the Dolphins didn’t cover the field all week with the rain because you guys were the faster, quicker team?

Lyons: I remember it rained all week and the field wasn’t covered. But again, they played on the same field and we had too many turnovers. Was it a set-up by Don Shula and the Miami Dolphins to not cover the field? I don’t know. I know it probably cost one person his job. I believe Walt Michaels was fighting for somebody to listen and say, “This isn’t right.” Shortly after we lost to Miami, 14-0, there was a change, Walt Michaels was fired and Joe Walton took over.

JC: Why did they get rid of Walt after that game?

Lyons: Well, Walt was upset. Walt was old school. He wanted to voice his opinion. As players we kind of bit our tongues, Walt was the mouthpiece, and I believe he spoke loud enough, and was heard, and was told to pipe down maybe. The next thing you know, Walt is not the head coach anymore.

Unfortunately for the players, we had a great deal of respect and love for Walt. That team got dismantled right after we lost that game and we were building something special that could have been there for a few more years in the early ’80s, but that is the way the game is.