LESSONS FROM THE ARNOLD ERA BIG GAINS FROM LOW DOSES 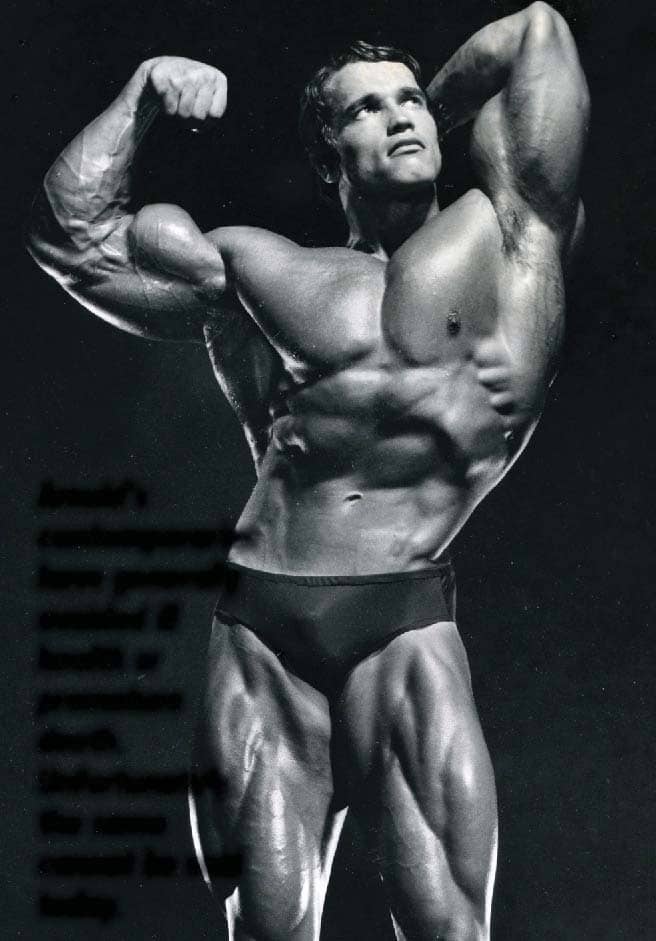 A great man once said, “As a teenager, I grew up with Steve Reeves. His remarkable accomplishments allowed me a sense of what was possible, when others around me didn’t always understand my dreams.” 1 That man was Arnold Schwarzenegger. Many young men growing up during the 1970s and 1980s can empathize with those feelings, as Schwarzenegger fulfilled that role for a generation worldwide. Arnold’s continued successes in diverse fields outside of bodybuilding reinforce his iconic status. Though an unqualified box office megastar, former Governor of California, as well as a man of significant wealth and power, these achievements are overshadowed by his legacy as “The Austrian Oak” in the most visceral sense.

Arnold represents the American Dream. He was an immigrant from Austria who purchased his ticket to the land of opportunity by achievement— having already dominated the Mr. Universe multiple times, Arnold’s first attempt to gain the top title in bodybuilding was stymied in 1969 by another immigrant, the late Sergio Oliva from Cuba. Arnold seized the title in 1970, going on to win the title seven times, including a comeback in 1980. His physique remains the pinnacle of bodybuilding imagery in the minds of many.

Bodybuilding has evolved, along with the myriad of physiques gracing the stage at events like the Mr. Olympia, the Arnold Classic Worldwide, and amateurlevel competitions. Some current champions would dwarf Arnold in a side-by-side comparison, showing not only greater mass but definition as well. Yet, in terms of public appeal and male iconography, Arnold remains unchallenged. If 100 people on the street were asked to name a bodybuilder, the vast majority would still reply “Arnold Schwarzenegger,” even though it has been 40 years since he last competed.

The average man realizes he does not have the potential or commitment to look like Arnold. However, for the average male bodybuilder, even the average gym rat, Arnold’s build is often the goal. The personal sense of achievement would be matched by greater social status for many. Yet, people have strayed from the example of Arnold, seeking instead to surpass his accomplishments or reach them more rapidly through a greater reliance on anabolic drugs. Arnold admitted to anabolicandrogenic steroid (AAS) use in several interviews with media. 2 However, the suggestions he offered and reports of those who were supposedly trusted with the information describe a very mild AAS use history, compared to today’s polypharmaceutical frenzy.

One definition of insanity offered by Albert Einstein is “doing the same thing over and over again and expecting different results.” An interpretation of this quote, “Insanity is doing something differently and expecting the same result,” may be applicable to what some bodybuilders are attempting as they stray from Arnold’s example to extraordinarily risky practices, incorporating numerous drugs at concentrations far exceeding those used by Arnold and his contemporaries. Those competing in open bodybuilding and some top-level amateurs today cannot satisfy the demands of judges and promoters with Arnold’s look; more latter drug use has escalated to nearunthinkable levels. It should also be noted that at age 23, Arnold was the youngest Mr. Olympia ever in 1970. Most Olympia champions are now in their late-30s to their mid-40s. Whether this is a reflection of greater longevity in the field of professional bodybuilding or a demand for longer exposure to the anabolic and lipolytic effects of training, diet, and pharmaceutical agents can be debated.

Though the focus of this article is on the effectiveness of moderate AAS use in promoting physique development, readers must acknowledge the dedication Arnold demonstrated in terms of diet and training. Without the commitment made to his lifestyle, at least during the competitive season (he was known to enjoy life’s pleasures as a young man), there never would have been “Arnold”— only an unknown Herr Schwarzenegger of Austria.

Arnold has never directly reported his AAS use, so every commentary on it, including this one, is based to some degree on speculation and secondhand information. Also, it is possible that his preparation in 1980 differed greatly from 1969 to 1975 contest preparation, given the increased financial backing and emergence of certain drugs.